Board Divided Over Budget 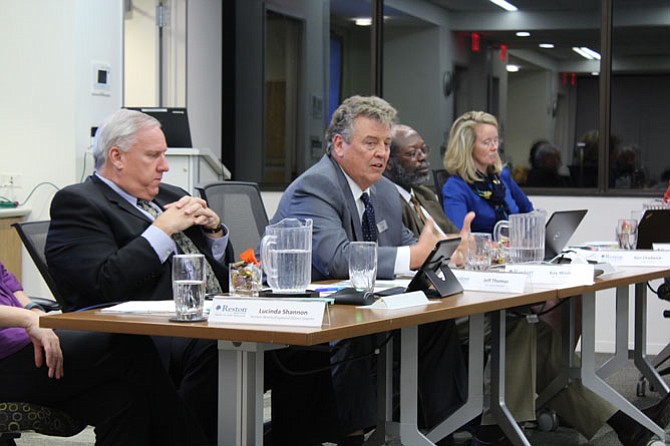 Ray Wedell (center), a Reston Association director at-large, spoke in opposition to the board’s proposed budget, which he said he will not support. Photo by Fallon Forbush.

Reston — Reston Association’s 2017 proposed budget was hotly debated during a public hearing that left both residents and board directors in disagreement.

The cost for residents’ membership to the RA was a particular point of contention during last week’s hearing.

Membership to the RA is required for all residential property owners in Reston, and they are billed annually for the assessment. The 2016 annual assessment was $657. The latest draft of the proposed 2017 budget resulted in an assessment of $692.

Prior to the hearing, the original proposed 2017 assessment was $698, but the board pushed back and asked the RA’s staff to reduce the rate by $7. RA’s CEO Cate Fulkerson found this savings by proposing to cut Reston’s pool budget by $138,000.

“My recommendation, as has been my staff’s recommendation for the past several years-- if not before my time-- to take a hard look at aquatics,” said Fulkerson. “If the organization has any place to save, it is there. We have too many aquatic facilities. It costs anywhere from $50,000 to $120,000 per facility per month, depending on where you are in the community.”

Danielle Larosa, the RA’s treasurer, disagreed with the cut and asked the board to reconsider reverting back to the original proposed rate of $698 in order to keep the aquatics budget as is.

“I don’t think we have enough information to … make those drastic dollar amounts of cuts,” Larosa said. “$138,000 is a drastic cut.”

But Eve Thompson, the RA’s secretary, countered and urged the board to “dig in” and make hard decisions now.

“It just kicks the can down the road,” Thompson said. “It’s very easy to avoid making unpopular decisions and it’s harder to dig in.”

“There’s alternative things in this budget that can be sliced before we start closing down member pools,” Wedell said. “When we close pools, I sense it’s going to be an economic decision based on usage … and I’d like to see us analyze in detail before we jump to conclusions.”

RA’s CEO Cate Fulkerson also asked the board to consider changing the operation hours for one of Reston’s newest real estate investments: the Lake House-- an investment that went over budget and is still yielding loss after its completion.

“I can tell you that, thus far, we’ve been open about four months and we’ve lost about $28,000 in potential rental revenue because of the hours,” said Fulkerson.

THE CURRENT HOURS of operation are operating at a loss, according to Fulkerson. And she wants the board to consider increasing the operating hours. She also wants to allow the space to be rented during holidays, like other facilities in the town.

These changes in the proposed RA budget would add an additional $81,924 of revenue. “[The proposed schedule] would result in coming in the black at the end of the year as opposed to not,” she said.

Several Reston residents showed up to the hearing to give feedback to the board, including the last-minute changes to the drafted budget that the directors were discussing.

“I have made a real effort to understand the RA budget,” said Ed Abbott of 2218 Wakerobin Lane during the public hearing. “Budget information is simply not presented to the board in an organized and intelligible manner. It is so bad that even the board is obviously confused about the budgeting process.”

“Before you approve any budget, much less an increase in fees, you must zero the budget,” he continued. “That is the only way out of this mess.”

He was not the only resident who was upset with the proposed budget.

“You are setting a path for RA that is simply not sustainable,” James Dean of 11195 Square Sail Court said of the proposed assessment increase during the public hearing. “RA members cannot continue to pay these type of assessment increases.”

“When I settled in Reston almost 40 years ago, the assessment rate was $60,” said Ronald Weber of 2004 Halyard Lane during the public hearing. “The present amount ... is also more than 10 times the gross amount I get from Social Security each month.”

Wedell turned the table and gave dissenting public comment to members of his own board.

“The core issue that has been ignored for years and will likely be ignored again,” said Wedell. “It is time to break the silence and force real discussion and a real vote on the relevant issues, and the issue in this case is the archaic and unfair way in which the Reston Association collects assessments from its members.”

He said that there has been a disparity in benefits members receive for their assessment dollars.

“I am a free-thinking person on a nine-member board that is supposed to represent the best interests of the people, and it is our responsibility to act,” he said. “I highly recommend that this become a major issue for the next Reston board member elections, and the subject of a future referendum, and one not in the distant future.”

The next election facing RA Board directors is next year, where RA members can vote from March 6-April 3, 2017.

As of now, the proposed budget will not earn Wedell’s vote.

“The RA board needs to have the guts to move forward and risk pockets of resistance and unpopularity,” he said. “Collecting the same annual fee from each member in Reston is simply wrong.”

He would prefer an assessment rate on a sliding scale based on a member’s property value. No one voiced support, but others from the community criticized the association’s services for its members.

The board reacted to the public comments.

“We really need to step back and look at our mission and see how our budget aligns with that mission,” said Lucinda Shannon, RA board director representing Hunters Woods/Dogwood District. “Administrative expenses is 60 percent of our budget. Forty percent goes to services. I think that we should be spending a lot more on services than administration.”

She finished her remarks by saying that the association is supposed to be for the homeowners and not, “whatever the staff thinks that they want to like to do and thinks is a good idea.”

Jeff Thomas, RA director at-large, reminded the board that its 2016-2020 Strategic Plan was developed over a two-month period last year and required, “substantial effort to establish.”

“We invested a lot of energy in going out to the community and we had meetings in each of the districts last year,” he said. “We asked the community, ‘Where are your priorities?’ ‘Where do you want us to be focusing our dollars?’

He said that by-and-large, the budget and where the association is spending its resources is consistent with the plan that was informed by the community.

“I feel confident that we’re spending the resources where the community has asked us to,” he said.

But he did admit that there were more opportunities where the board could be more efficient, and that, “they needed to do a better job at that.”

Still, Wedell stuck to his opinion that the process for the board’s decision-making is flawed and framed by what the staff wants, as opposed to what residents want.

“We are in dire need of leadership,” he said.

A second public hearing for the RA budget is scheduled on Thursday, Nov. 17. The board will then finalize the assessment rate.