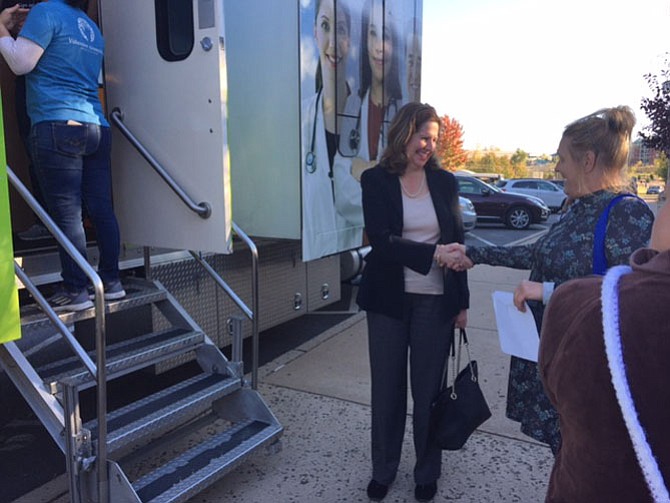 Mayor Allison Silberberg greeted Olenia "Kay" Haley, who used the opportunity to learn about Obamacare and sign up; she got blood work done and tested her glucose and cholesterol levels. Photo by Stephanie Caffarel

Richard Merritt, Councilman Tim Lovain, Dan Hawkins, and Dr. John Klousia at the health fair. Merritt said, “Without Tim Lovain’s budget amendment, the Alliance wouldn't have had the money to expand primary care in the city and would never have even attempted to organize another fair.”

The expressions of gratitude for the free health fair, organized by the Alliance for Alexandria’s Uninsured, moved many of those who volunteered at the fair. "Gracias Bendiciones a todo generosas que aludan a ser realidad este programa. La Comunidad hispana agradecida," said a Spanish-speaking woman at the fair. Translation: "Thanks and blessings to all of the generous people who helped to make this program a reality. The Hispanic community is grateful."

Another woman wrote on her exit interview: "Gracias por ayudar con informacion y servica para montenemos saludables." "Thank you for helping with information and services so we can keep healthy."

“Those two quotes for me represent the sum total of why we do these fairs,” said Richard Merritt, a founding member of the Alliance for Alexandria’s Uninsured and an organizer of the Fair.

The health fair on Nov. 4 was financed without any city funding and totally through the contributions of several generous donors in the community. It was staffed by more than 100 volunteers from the community. Most were recruited with the help of Volunteer Alexandria.

Susan Nolan, a health insurance navigator at Enroll-Virginia! said their screeners counseled approximately 164 people at the fair. Approximately 40 percent were referred to Neighborhood Health, 35 percent to Enroll-Virginia for ACA assistance. Enroll-Virginia saw approximately 25 people; 15 of those did applications for eligibility and nine of those selected a health insurance plan. Two parties did not select a plan because they thought it was too expensive. Because the application process can be lengthy, the others took a flyer to review the health plans in greater detail on their own.

DoctorsTelemed, a telemedicine solution managed by the Medical Society of Northern Virginia Foundation (MSNVAF), whose mission is to expand access to healthcare to patients at the time of need, was at the fair. In June 2016, CareFirst awarded the MSNVAF a grant to provide free telemedicine consults for low-income, uninsured patients who live and/or work in Northern Virginia. According to Claudia Tellez, MSNVA executive director, the organization registered 25 patients to use DoctorsTelemed at the health fair. They also agreed to meet with the Global Health College to offer free telemedicine services to the student body, many of whom are minimum wage working adults.

Of the 102 people The Kidney Foundation screened, 24 had an abnormal result. According to the foundation, this doesn’t confirm these people have chronic kidney disease, but the 24 participants were recommended for follow up because these people need to be further tested, primarily by Neighborhood Health since most of them had neither health insurance nor a primary care physician so they could get the tests to diagnose chronic kidney disease (CKD). One participant was taken to an urgent care center based on a consistently high blood pressure.

Laura Jessick, of Friends of Guest House, said she talked to two women who attended the health fair when they came to a class that evening. One, Kristen Sedlar, a 19 year old who is pregnant, was motivated to go to the fair because she had not been to see a doctor in a while and wanted to make sure she was healthy: up until now, the care she has received was for the baby. She was very happy that there ware testing/labs offered on site; she got her blood work done and is expecting the results soon. She had another test done and was informed that she had an infection and needed treatment. She was overjoyed to get a new toothbrush and a flu shot. She said, “I would encourage many people to go to the next health fair: I was able to make sure I was healthy and get resources. I felt good when I left the fair knowing that I'll be able to be a healthy mother."

Olenia “Kay” Haley was effusive in her appreciation: "I'm an older women that has faced many obstacles in life,” she said, “and I've recently been struggling to secure steady employment with good pay. Without a job or money I have very few resources to utilize for health services. I've been worried about a number of different things and I'm on waitlists but can't afford to see a doctor outside of a clinic. The fair was very informative and gave me the opportunity to make sure I'm healthy. it was like a quick free physical exam."

Merritt, asked if the fair would be repeated next year, replied, “If you had asked me that before the election, I would have said I'm not sure. But now, I feel we will need more expressions of community concern and compassion, like the health fair, for our most vulnerable residents, not less."