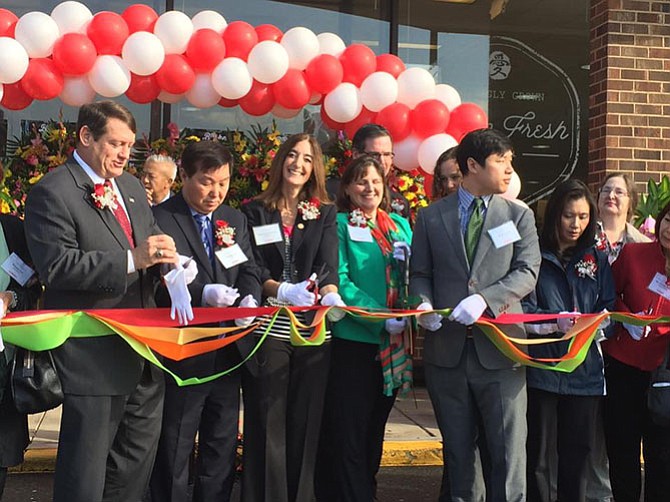 Del. Eileen-Filler Corn (D-41), Supervisor Pat Herrity (R-Springfield) and others participating in the ribbon cutting of the new H-Mart.

Burke — On Nov. 9, Burke Village Center officially welcomed a new tenant, H-Mart, an international grocery store specializing in Asian food. H-Mart has a long history in Virginia. The new Burke location is their sixth in Virginia and their 55th in the United States. Its name derives from the Korean expression, Han Au Reum, literally meaning “one arm full of groceries.”

The store opened with a large crowd and much fanfare, including Korean percussion music, a Chinese lion dance, traditional Vietnamese dance and plenty of balloons. Amongst those in attendance were Del. Eileen Filler-Corn (D-41) and Supervisor Pat Herrity (R-Springfield), as well as members of the Greater Springfield Chamber of Commerce. Both Filler-Corn and Herrity participated in the official ribbon cutting.

“For more than 27 years, my husband and I have lived and raised our two children just down the street from this shopping center. I was excited when I heard that H-Mart was coming to Burke. I feel particularly fortunate to live in a place as diverse as Fairfax County. Having H-Mart here in Burke, further exposes our community to different cultures, food and traditions. The store is impressive. I was particularly taken by the beautiful produce section and fresh fish. H-Mart has a long history in Virginia and I am so glad that they decided to locate in the 41st District,” said Del. Filler-Corn.

Filler-Corn also mentioned how appreciative she was that in addition to providing new jobs in Burke, H-Mart brings with it a long history of giving back. The company partners with charities both local and national to make its community a better place.