Working Together to Feed 289 Arlington Families 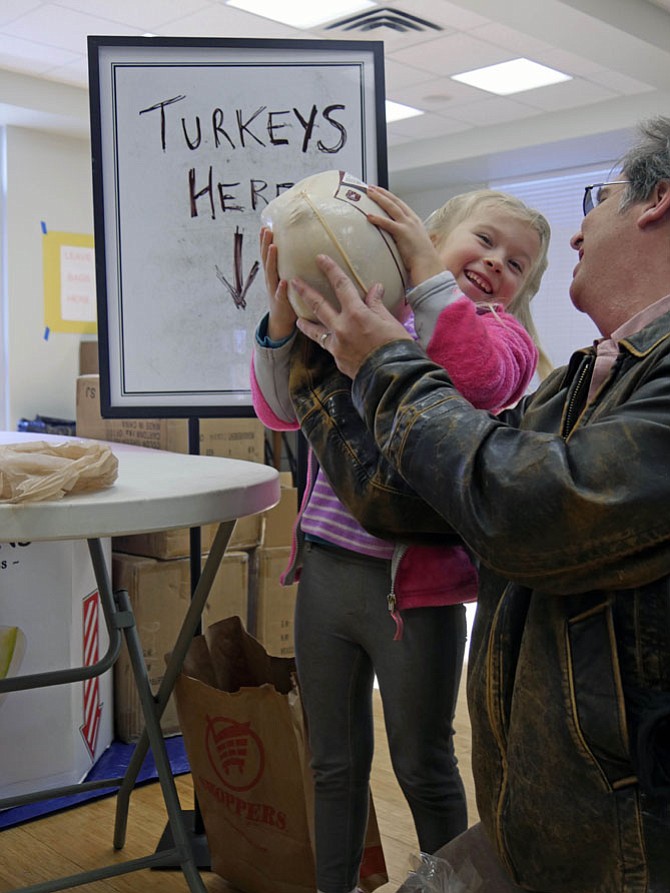 Six-year-old Maggie Rinzel struggles through the door of the Ministry House at Our Lady Queen of Peace Church with a turkey. Maggie and her dad, Dan, are dropping off their turkey donation for the 239 families who have registered to receive a turkey dinner. The church is located on 19th Street S in Arlington. Photo by Shirley Ruhe. 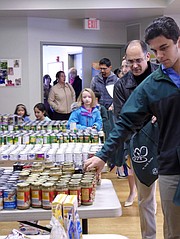 Parishioners at Our Lady Queen of Peace Church lined up after a Sunday morning mass to grab a bag and fill it with cans of vegetables, cranberries, gravy and cornbread mix.

“We have a clothing store and food pantry so word gets around the community about the Thanksgiving baskets.” — Michelle Knight, director of social justice and outreach, Our Lady Queen of Peace

The door to the Ministry Building at Our Lady Queen of Peace opens and 6-year-old Maggie Rinzel struggles in with her father, Dan, to deliver a Thanksgiving turkey.

This donation is part of a dinner for the 289 families who have registered to receive a Thanksgiving dinner. Tables are organized and ready to receive frozen turkeys or canned good donations from the parishioners after five Sunday Masses on Nov. 20.

Michelle Knight, director of social justice and outreach for Our Lady Queen of Peace says all of the food has been donated by parishioners. “We started collecting it the first week in November.” Families in the community register to receive a Thanksgiving basket, and they have appointments to pick up their dinners. She said the Thanksgiving dinners are not just for church members. “We have a clothing store and food pantry so word gets around the community about the Thanksgiving baskets.”

Tables are piled high with cans of peas and corn, cranberries as well as jars of gravy and boxes of cornbread mix. Knight says they are trying to collect more than the 239 turkeys for the registered families since they hope to be able to give two turkeys to large families of six or more and they have also donated turkeys to the Shirlington Education and Employment Center (SEEC) Thanksgiving dinner. She adds the large families will also receive two bags of canned goods.

Alex Puruggan walks in the door with cardboard boxes of home-baked pies to be placed on the tall metal racks already loaded with previous donations. He says, “We have blueberry and cherry and apple and some cobblers.” He points out that children have hand-written notes in crayon and taped them to the top of his pies. Knight said that church family groups get together and have pie-making events in their homes. Puruggan is delivering the results of one of the events. He says, “We started to call ourselves Our Lady Queen of Pies.”

Knight says each family will receive a bag with with two canned vegetables, a can of cranberries, gravy and cornbread and hopefully the makings for an extra dessert such as a cake mix or canned fruit pie filling. When the family arrives to pick up their dinner, a frozen turkey will be added plus five pounds of potatoes and a home-baked pie. In addition, each small family will receive a $10 gift certificate and each large family a $20 gift certificate.

Knight estimated that about 50 volunteers had been assisting with the Thanksgiving Day effort since it began in early November. Saturday morning donations had been sorted and assembled on tables for bagging and volunteers were at the church to accept donations. Bags were filled on Sunday after Mass and ready to be picked up on Monday. She said she didn’t know how many years the church had been spearheading this effort but at least for the last five years since she has been working at Our Lady Queen of Peace. She said this is a nice way to provide the Thanksgiving dinners because the effort involves the whole congregation who are busy baking pies, filling bags, sorting cans and organizing the effort.