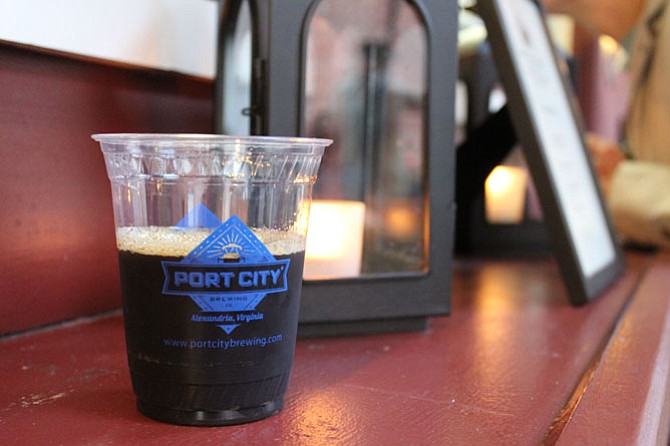 Long before Alexandria’s current heyday, when the Port City was in the middle of becoming a port city, a mystery woman came to Gadsby’s Tavern with her gentleman caller, became ill, and died, her final resting place the St. Paul’s Cemetery. “To the memory of a Female Stranger,” the gravestone reads in part, launching two centuries’ worth of lore and theory about her identity, her companion, and her presence in Alexandria in the first place.

On Friday, Port City Brewing teams up with Gadsby’s and St. Paul’s Episcopal Church to commemorate the 200th anniversary of her death, with the release of the brewery’s annual Long Black Veil black IPA and a series of events at both the tavern and the cemetery that evening, following a beer-only release event at Port City on Thursday night from 4-9 p.m.

“We’re very excited for it,” said Port City’s Chris Van Orden. Visitors “can just come to the happy hour, which is at Gadsby’s Tavern. … Then there’s the Quest, where you actually take a shuttle to St. Paul’s Cemetery to visit the grave of the Female Stranger.”

The event at Gadsby’s will feature Long Black Veil as well as some of Port City’s other offerings, paired with some appetizers and light fare. Tavern docents will be on hand to offer tours and provide a bit of historical context before daring event-goers board a shuttle to travel across Old Town to the St. Paul’s Cemetery to view the gravesite for themselves.

At the cemetery, visitors will be treated to docent-led tours of the gravesite, including the Female Stranger’s, and will even be treated to a 1800s-era funeral service reenactment.

But back to the beer. Long Black Veil “is a black IPA, which is a very hoppy beer with some dark malts in there as well. It looks like a stout or a porter but drinks closer to an IPA,” Van Orden said. First brewed in October 2014, “it’s got citra and centennial hops, which are citrusy and piney … with a little bit of dark, slightly chocolatey character to it too.”

Can’t make it to the Female Stranger festivities? Long Black Veil will be available at the brewery and on tap at various restaurants around town for the next few weeks. But don’t delay: Port City has brewed just one batch, as is its custom.

“It will be on draft for a little while, but it’s a not a beer that lasts forever,” Van Orden said.