Alexandria People at Work: Shaping Her Life, Her Art
Votes

Alexandria People at Work: Shaping Her Life, Her Art 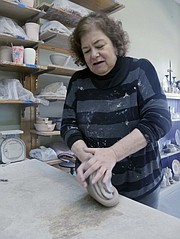 Renee Altman, potter and owner of The Clay Queen Pottery on Mount Vernon, focuses on the upcoming Halloween Season by creating a pumpkin. Altman wedges off a hunk of clay, kneads it 100 times "like bread dough.” Then onto a bat placed on the potting wheel where Altman's hands gradually form the clay into a cylinder, thinning the sides and pressing the clay out into a pumpkin. She will etch a leaf pattern and lobes around the pumpkin. It will be fired in an electric kiln, glazed and fired again for 12 hours in a gas kiln where the temperature will reach 2300 degrees. 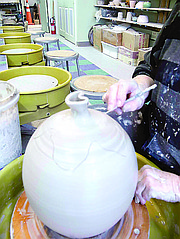 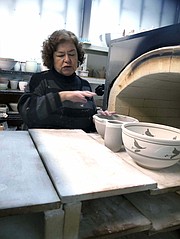 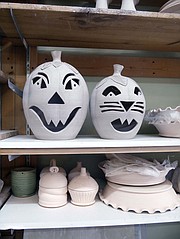 Renee Altman wedges off a large chunk of high-fired stoneware clay and puts it on the workbench. "It's like kneading dough. I usually do this 100 times." Altman owns The Clay Queen Pottery on Mt. Vernon Avenue.

Altman says, "We throw pottery on a bat (metal plate) because you don't have to lift up a wet pot; you can lift up the bat."

Her foot pushes on a gas pedal attached to the potting wheel. "It's like driving a car. Press the toe and the wheel goes faster; press the heel and it slows down." Altman puts the clay in the middle of the wheel, and her hands surround the clay as it spins and takes on shape. "This is called centering so the wheel doesn't have a bounce. It takes a little skill and a lot of brute force."

Altman dips her hand in a container of water and splashes a little on the clay as she moves her hands slowly up the wedge, beginning to form a tall cylinder. "It needs a lot of lubrication, not a lot of water, but frequent." She says, "I think I'll make a pumpkin. See that large vase on the back shelf? That started out as a pumpkin, but the clay just didn't want to do it."

As Altman works her hands upward pushing the clay, it gets thinner and thinner. She says when you begin learning to work with clay there are some things you have to remember "but then it becomes second nature, like how hard to push the clay."

She puts her left hand deep inside the spinning cylinder, gradually adding pressure and pulling out the sides to form a pumpkin. She scrapes out extra clay, a little at a time, so the pottery won't be so heavy. "Now it's time to make the stem. I'm going to puff it up to make it rounder." Her mouth on the wet clay, she blows into the stem to remove the irregularities. "We're only human when we work with the clay."

Altman picks up a metal needle tool and works her way around the pumpkin, indenting a leaf pattern into the clay. Using the end of the needle tool, she adds lobes — "you know a pumpkin has lobes."

Now comes the waiting. In a day or two when the clay is half dry, called leather hard, she will cut the lid off. When the clay is completely dry, she will lower it into her electric kiln for about eight hours. "If I put it in wet, the water in the clay will boil and the pot will explode.

The pot is glazed with a choice of vibrant colors. Next it moves to a shelf in the gas shuttle kiln where the pots get fired for about 12 hours as the kiln slowly works up to 2300 degrees. Altman says she waits until she has enough pottery and then loads it efficiently on the shelves. Two gas jets hit a brick and then shoot up and around in a circular motion like a convection process. “Each kiln has a personality and unfortunately it changes over time as the atmosphere changes in different locations. I can tell because the glaze won't come out the color I know it should be."

Altman remembers the day she decided to try being a potter. It was April 23, 1975 when she quit her job at the Smithsonian doing research in preparation for the bicentennial. "I made this decision the way I make most of my big decisions. I said, 'I don't need this. I'm out of here.'" At the time she had been taking pottery lessons at Eastern Market in D.C. for several years. "I enjoyed what I was doing and had no responsibilities so I decided to give it a try." She taught at Eastern Market for a while. "I've been here at The Clay Queen for 16 years."

Altman offers 10-week classes Monday, Tuesday and Thursday from 7-10 p.m. and on Wednesday from 12:30-3:30 p.m. She says her students are a variety of ages and professions. "Everybody comes through here." Altman says some pick up pottery better than others. She pauses, and adds that generally some men learn better than women. “I think it's because they aren't afraid of their own strength."

In the mornings she is busy creating her own pottery, and it will be featured in her Holiday Open House the first weekend in December. "I've been doing this a long time and I'm old enough to retire," she ruminates, "but I don't want to."