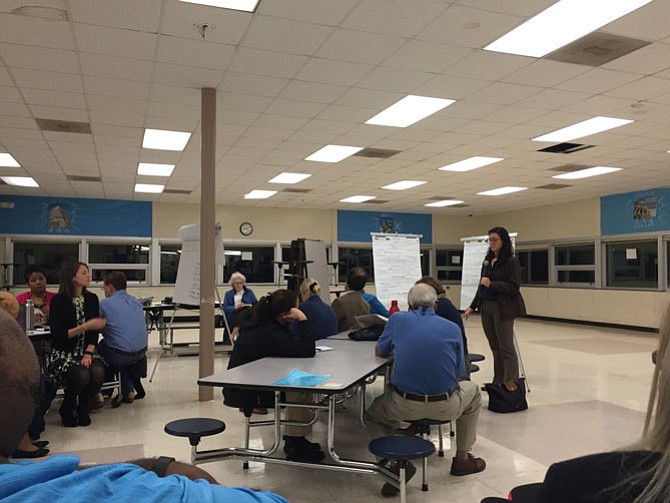 Above all else, Alexandrians want a healthier and more transit accessible city, and they’re willing to pay for it. At a meeting on Oct. 13 at Patrick Henry Elementary School, the city’s FY2018 budget process kicked off with an opportunity for the 50 citizens present to voice their thoughts on what parts of the budget merited further investment.

Though the citizens were split into separate groups, most came to similar conclusions about where the city needed to more heavily invest.

Allen Lomack, representing one group of citizens, was the first to say that public health needed to be a focus of the city’s budget. Both of the other two groups echoed Lomack’s sentiment, questioning why the city’s department of health had fallen into a state of disrepair. Katya Wanzer, chair of the Public Health Advisory Commission, warned that cuts to the Health Department could have an impact on the city’s ability to perform restaurant and other health inspections. 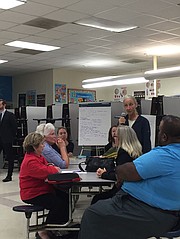 Rising operating and capital costs for Alexandria Schools could play a major role in the FY 2018 budget.

City Manager Mark Jinks said funding to the health department was an issue he hadn’t expected much public outcry over.

“The health department budget was something we usually don’t hear much about,” said Jinks. “That was something that was new. In prior years, very little had been said about it.”

According to Jinks, fixing the health department isn't simple and isn't something the local government can do alone. The Alexandria Health Department is state-run with its budget funded by the state.

“We supplement their salaries because state salaries are not enough to cover their costs and fund some positions,” said Jinks. “The state has been cutting back in public health and had to make tough choices with regards to level of services. It is a state function, however, it is a function that serves the citizens, so they are a regular part of our budget process. We treat them as much as we can like a city department.”

“We decided to fund another restaurant inspector,” said Jinks. “Kitchen review and permitting comes from the state health department, but that process was taking longer than we wanted. The position was paid for out of code fees.”

There are seven positions for health inspector in the department, though one position is vacant because of the state hiring freeze.

“The position is funded on the city side, we have a 45 percent match [obligation], but the funding is frozen on the state side,” said Jinks.

Margaret Townsend from another group of citizens said it was fascinating to hear how closely the different groups’ choice of priorities and trade-offs aligned. One of the main topics out of Townsend’s group, one echoed by citizens in other groups, was a need to push forward on the city’s Complete Streets Policy. Passed in 2011 and reenacted in 2014, the Complete Streets Policy aims to make city streets more accessible to bicyclists, pedestrians, and buses in ways that fit with the traffic needs of that community.

“We know there’s a backlog where neighborhoods would like more complete streets, but it’s a matter of budget,” said Jinks. “If people want more pedestrian-friendly streets … with traffic-calming measures, it takes a while. That’s something that takes any jurisdiction a while.”

According to Jinks, $1.5 million was dedicated to Complete Streets related traffic issues for the FY 2017 budget. Jinks said a $500,000 increase each year would be healthy for the program, but wouldn’t solve the issues with long-term demand or necessarily increase the speed of the process.

“Traffic calming takes a lot of meetings,” said Jinks. “You don’t just go out and change things. You have to make sure there’s a lot of community input and discussion. Even if there was an ideal amount of money in the budget, it would still take us years to work through each neighborhood.”

Jake Jakubek, a citizen representative on the Transportation Commission, said many projects get stalled when transportation budget funding is consumed by Metro needs. Jakubek said he hoped the city would be able to find a way to budget needs of other city transportation from funding reserved for Metro.

Residents also expressed dissatisfaction with the 11.3 millions of gallons of sewage dumped into Oronoco Bay every year, but Jinks said while other outfalls in the city are not spilling as much sewage, they are being dumped into smaller bodies of water.

“The outfalls at Hoof’s Run and Jones Point are the priorities given to us by the [Virginia Department of Environmental Quality],” said Jinks. “The outfall from Oronoco Bay, from a state view, is a lower priority. The Potomac River has such volume that the Oronoco Bay is such a smaller percentage [of sewage] than the amount that goes into Holmes Run. The state decided to tackle streams and tributaries first. We will be dealing with Hoof’s Run and the outflow at South Royal Street first.”

Jinks said the two major external drivers of cost in FY2017 are going to be increasing public school enrollment and Metro funding.

What will happen with Metro, Jinks said, is still vague at this point.

“If there’s not a fare increase, and who knows if that’s going to happen, we know state and federal government aren’t going to be increasing their funding to the Metro next year,” said Jinks. “That leaves only local funding.”

A proposal to close 20 Metro stations during off-peak hours, presented by Metro last week, would include Alexandria’s Van Dorn and Eisenhower Metro stations.

“I don’t think the threat to close stations in the middle of the day was serious,” said Jinks. “It made no sense and appeared to be posturing.”

On both the public schools and Metro, Jinks said it’s too early to predict exactly what the cost to the Alexandria taxpayer will be. According to Jinks, Superintendent Alvin Crawley’s proposed Capital Improvement Plan budget proposal is expected to be released within the next few weeks, while Jinks said Metro General Manager Paul Wiedefeld is expected to make his budget announcement “shortly.”

According to Morgan Routt, director of management and budget, the current capital funding agreement with Metro ends in 2017, meaning the city will begin new financing negotiations with Metro. Routt said Metro is currently anticipating a $275 million gap in its FY2018 operating costs.

The budget will be a main topic of discussion at the City Council’s Nov. 5 retreat and the council will give city and school staff their budget guidance on Nov. 9.