Alexandria People at Work: Neighborhood Pharmacy Cares for Its Community 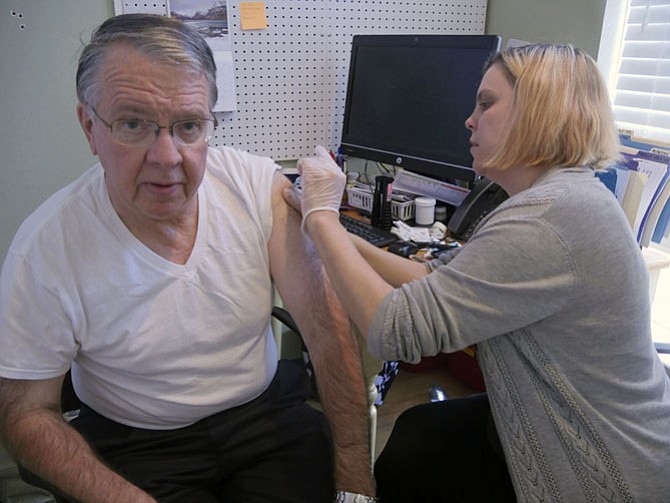 Keith Stalder, a regular customer at The Neighborhood Pharmacy, has come in for a flu shot. He says this is the way every business should be run. “These small pharmacies are almost non-existent.” Photo by Shirley Ruhe. 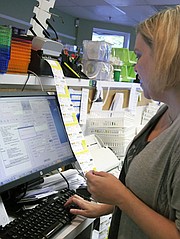 Stacey Swartz prints off the morning’s prescriptions and will triage them to fill the most urgent first. Swartz is pharmacist and co-owner of The Neighborhood Pharmacy in Del Ray.

Jennifer Heatherington has been coming to The Neighborhood Pharmacy since it opened eight years ago. She remembers when Swartz delivered a prescription to her house at 7:30 p.m. for her newborn baby with reflux. 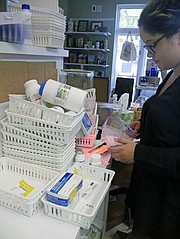 Mia Soto, a student at George Mason, works as a pharmacy technician at The Neighborhood Pharmacy. She is dispensing seizure medication with an auto count machine.

Over 1,000 look-alike white bottles line the shelves, cram the nooks and crannies and sit in the refrigerator at Neighborhood Pharmacy on Mt. Vernon Street in Del Ray. Stacey Swartz, pharmacist and co-owner, has operated the independent pharmacy for eight years since she bought the space from Show of Hands. "Monday is the busiest day of the week," she says, "with all of the things piled up from the weekend."

Swartz explains filling prescriptions is a very manual process because although she has an automatic refill process, she goes through to pick what to refill on a regular basis. "For instance you may not need nasal spray every month." In addition she will triage the prescriptions that have come in to fill the most urgent ones first.

"Keith, I haven't seen you for a month of Sundays."

Keith Stalder, a regular customer, has come in for his flu shot.

"You're not sick today? You're not allergic to eggs?"

Stalder takes off his suit jacket and shirt as they chat about families. After a quick swab of alcohol, Swartz painlessly inserts the needle. Stalder volunteers, "Just so you know, this is the best pharmacy in the history of the galaxy. They are awesome; this is the way every business should be run." He says, "These small pharmacies are almost non-existent."

Swartz has just printed off a list of prescriptions that came in this morning. She says about one-third come electronically from doctors' offices, one-third written prescriptions and one-third by phone or fax. Mia Soto, a student at George Mason, stands beside Swartz dispensing 80 tegretol pills to prevent seizures using an auto count machine. It is useful for inventory and for quality control.

Schwartz looks up, "Oh, hi Jennifer. Come to drop off or pick up?"

Jennifer Heatherington has been coming to the pharmacy for a long time, "pretty much since they opened. I remember when my newborn had reflux and Stacey stopped by with a prescription for Carys at 7:30 p.m." Swartz says she delivers to four local zip codes. "I have just been checking prescriptions for ADHD medication that we are about to deliver up the street to the Episcopal High School. Since it is a boarding school we also deliver over the counter drugs." Swartz notices that Heatherington's coupon card that takes the co-pay down has expired and issues her a new one. "That saved you $110 today."

Swartz's morning employee is about to leave so she debriefs Swartz on what she has done or been unable to complete before leaving. It might be a complicated insurance problem or a special order that she doesn't recognize or just too many prescriptions to finish typing. "She has a harder gig than I do, " Swartz says, "because she has to catch up on everything over the weekend and our orders coming in are twice as large."

The phone rings again. "Hello can I help you? Hold on just a second. We don't have that in stock but I can try to find it for you." Swartz explains that she doesn't keep some things like dermatological products in stock because there isn't a big demand and they expire. "And they are not usually urgent so I can have the prescription by the next day."

Another regular customer comes in to pick up a prescription for his wife. "Yours is going to take until tomorrow; is that OK?" Swartz checks her computer. "You can use a co-pay coupon for that one. It will be $20." The customer replies, "Wow. That's better than $80."

Swartz says she got started down this path because she worked at a CVS pharmacy in New Jersey when she was 16. "I was good at being a pharmacy tech and my mom thought it would be good work for a woman so she encouraged me.”

Swartz worked for a non-profit pharmacy association but got tired of "the rigmarole of an office." When her friend encouraged her to start her own business, "I said if you do it with me.

"The community has been very good to me here. I don't know if I could have done the same thing anywhere else in Northern Virginia. People are loyal." She continues, "They look out for me. When there was a Walgreen's going in, they asked if I'd be OK or if they should talk to local officials to try to stop it." But she says it really hasn't affected her.

Swartz says, "What's nice about my industry is there is a co-pay wherever you go so there's not a big price difference if they come to me." And she says, "I try to make it less stressful for people who may be sick when they come in, and big chains can be unpleasant. "It's about making sure you know who the customers are, and to care about them."