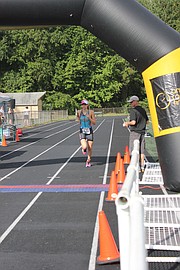 Claire Wolff, 17, of McLean, won last Sunday’s Reston Triathlon - in her first appearance -- with a time of 2:25:28. She currently attends McLean High School where she is a competitive swimmer. “I’ve been doing it for thirteen years, so it’s just always been something that’s consistent. I like the water.” She began adding biking and running to her workout routine when she heard that triathlons were on deck to become an NCAA sport. She joined the local triathlon team, Machine M3, where she participated in a few sprint triathlons. At the end of the race she felt “a little bit in pain, but overall pretty good!”