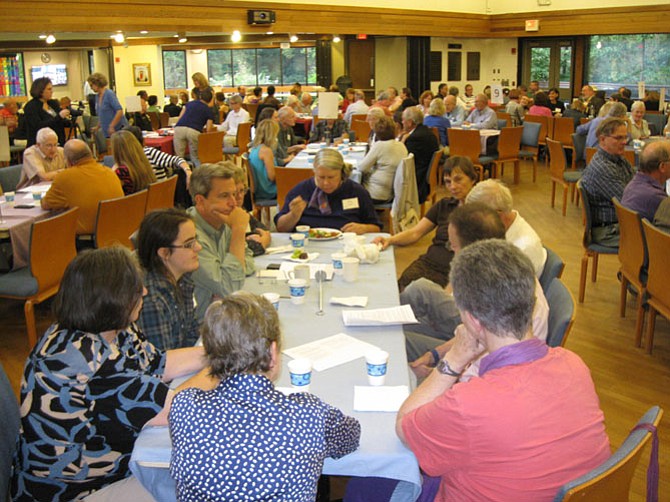 About 150 people attended "Finding Common Ground" -- A Reverse Town Hall to End Gun Violence on Saturday, Sept. 17 at the Unitarian Universalist Congregation of Fairfax in Oakton. Photo by Steve Hibbard. 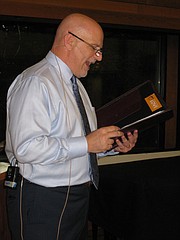 The Rev. David Miller of the Unitarian Universalist Congregation of Fairfax in Oakton gave the opening message and prayer. 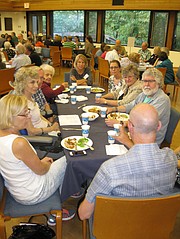 About 150 people attended "Finding Common Ground" -- A Reverse Town Hall to End Gun Violence on Saturday, Sept. 17 at the Unitarian Universalist Congregation of Fairfax in Oakton.

Del. Mark Keam (35) listens to constituents at his table.

The 13 legislators whose districts touch Fairfax County were in attendance as well as Michele Leith, Northern Virginia Community Outreach Coordinator for the Office of the Attorney General; and LuAnn Bennett, candidate for the 10th Congressional District of Virginia.

About 150 people attended "Finding Common Ground" -- A Reverse Town Hall to End Gun Violence on Saturday, Sept. 17 at the Unitarian Universalist Congregation of Fairfax in Oakton. During a potluck dinner, people sat around tables by ZIP code with their local Virginia state legislators -- 13 of them -- and shared their views on gun ownership. At least one gun owner was seated at each of the tables as well.

"One of the main reasons we wanted to do this was to bring people together in a non-traditional way to transcend the stereotypes and political positions we've seem to have fallen into as a country. No one group speaks for everybody, so we're inviting people here tonight to share their personal experiences to increase connection and hopefully move the discussion on gun safety into a different place," said the Rev. David A. Miller, senior minister of the church.

He added: "We created an opportunity to bring gun owners and non-gun owners together to break bread as civil human beings. There is a time and place for the picket line, or a letter to the editor or even lobbying elected officials, but tonight, we are going to eat, share our stories and with any luck, have a civil and meaningful night together."

The potluck dinner was followed by a facilitated discussion about guns and then a wrap-up from their local legislator. Each person had time to speak from their personal experiences. They were not trying to solve gun violence in one dinner; rather, to learn from each other, build relationships between gun owners and non-gun owners, and to allow legislators to experience something unique and hopeful in a space that is typically dominated by arguments and anger.

ONE OF THE QUESTIONS was, "What is your hope for common ground between gun owners and non-gun owners?"

Gun owner McKinley Sims, who was born in Lubbock, Texas, and now residing in D.C., said: "I grew up on a cattle ranch where guns are part of everyday life. They're used for protection against wild animals, used to hunt for food; they're also family relics that are passed down from generation to generation. So the things given to me by grandfather in his will are all firearms. Those are the last physical mementos I have of him. And I have a hard time giving those up. I was taught how to use them as tools and treat them with utmost respect. And Rule No. 1 was you never point it at another person."

"We are not gun owners; we are concerned about gun violence and the ability of people to obtain guns without appropriate background checks," said Connie Drapeau, a Vienna resident for 40 years who now resides in Ashburn. "We are a divided family; we are not in favor of owning guns. We're very interested in hearing the other side of the story."

Ann Houck of Waverly Hills in North Arlington said, "I think we do have a problem with gun violence, not necessarily with guns, per se. I don't know what the answer is but I do think it's important for people on both sides of the issue to talk to each other, or how else are you going to reach middle ground? I don't know a lot of people who own guns, but I would like to understand the perspective of people who do own guns."

Dick Neff of Oakton added: "We don't live in the Wild West anymore. There are so many countries in the world that have sensible gun laws and they don't have the mass killings that we do. So we need to do something....An assault rifle is made to kill people very efficiently, and I don't think they should be available to the general public."

Arlene Wilder of Falls Church said, "I am all for responsible gun ownership. I'm not a gun owner myself but I can see why people feel the need to have a gun or want to have a gun."

Theo Meale of Vienna added: "I believe in the 2nd Amendment and everyone should have access to guns as long as they can pass a background check and use guns responsibly. I'm not a gun owner but I sympathize with the reasons why people would use guns, such as hunting and self-defense."

Lydia Lewis of Oakton said, "I have issues with not registering people who own guns. I think gun registration should be a basic requirement. And assault weapons should be banned completely; I think it's pretty evident with all of the shootings."

Susan Lewis of Del Ray in Alexandria added: "I find it frightening that there are so many guns in the community. That's just a 'no-go' for me; I think they should be banned. There's no reason to have a weapon like that."

Linda Jemison of Hybla Valley in Mount Vernon added: "I think guns are tools just like axes and chainsaws. I own guns, my brother owns guns and I come from a long line of hunters."

AT THE CONCLUSION, state Sen. Adam Ebbin said: "I like hearing your point of view. It falls in line with what I'm hearing from my colleagues. Common Ground is really hard to find on this issue. We hear about these horrible tragedies, but the results are sometimes predictable. I think there is a difference between hunting weapons, weapons for defense in your home, and I wish we could find more common ground... We're never going to decide this once and for all. People feel very strongly on this issue and it's hard to find compromise. We have a lot of polarization, not just in our country but in our legislatures."