New fee for residential and commercial properties to be based on permeability. 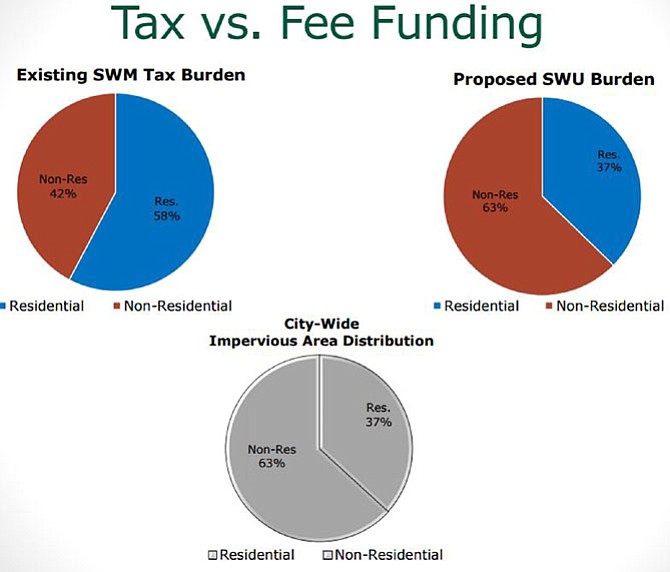 It might be time to plant some more trees and green up the home. A new stormwater service fee proposed by city staff could be directly tied to the permeability of residential and commercial properties. The fee is the proposed solution to an unfunded mandate by the state requiring one quarter of the city retrofitted for stormwater treatment by 2028.

According to William Skrabak, director of Environmental Quality, the city is so far exceeding its current goals with a 20 percent reduction. To meet the second and third cycle goals, the city will be undergoing a variety of environmental changes to assist with stormwater runoff. These changes include retrofitting lakes and ponds across the city, setting new guidelines for streets with bioretention capabilities, and investing in green roofs as part of the Old Town North plan.

Skrabak says the environmental improvements are expected to cost $50 to $60 million, with the entire cost of projects not already in development being covered by the fee.

“The stormwater utility fee is based on the impervious areas of the home, [which creates] increased stormwater runoff,” said Jesse Maines, water quality compliance specialist for the city. “You pave, you pay.”

Maines said the fees will be based on GIS collected data, which is automatically updated every two years. According to Maines, there will be ways to have the fee reduced. Fee structure and reductions will be detailed in a report in the coming months.

According to Yon Lambert, Alexandria’s director of Transportation and Environmental Services, the service fee is intended to replace the half cent tax increase for stormwater management, though whether or not to keep that tax remains up to the City Council. The fee will shift the primary burden of the cost towards non-residential properties to match the current city-wide impervious area distribution. The plan will be refined throughout the fall and is scheduled to be presented to the City Council in May 2017 as part of the budget process. If approved, billing will begin May 2018. Currently, staff is reaching out to groups across the city to inform them about the service fee.

“The city has been good about informing the [Civic] Federation on this project and its anticipated cost with annual updates over the last several years,” said Roy Byrd, chair of Alexandria’s Civic Federation, in an email. “That said the extent of the bill citizens will have to absorb continues to be of great interest. [There are] concerns that the projections are too conservative. However, for the Federation and its members the larger issue is the cumulative impact of a number of projects — stormwater, Metro (the Potomac Yard Station and the WMATA budget shortfall), property tax increases (direct and through value assessments), personal property tax (auto, to include paying for the right to park). We are asked to pay more and more in the form of direct and indirect taxes while delivery of basic services decrease — crumbling infrastructure, increasing density and traffic — impacting safety and the quality of life throughout the city.”

While most of the focus is currently on the second phase, Skrabak said staff has similar concerns about cost projections in the project’s third phase, which will require a 60 percent stormwater reduction over five years.

“We’re a bit concerned about the third permit cycle reduction,” said Skrabak. “If we don’t meet those goals, Alexandria is subject to enforcement measures and could be fined.”