‘The Best with What We Have’ 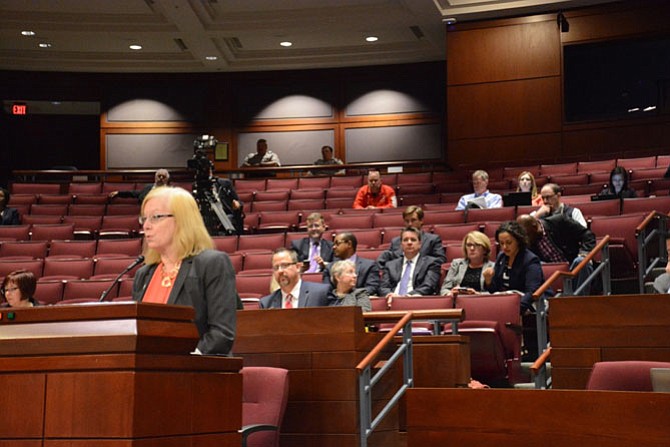 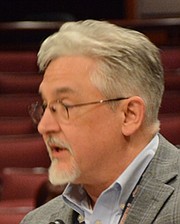 Armando Peri is president of the Fairfax Association of Elementary School Principals and principal himself of Pine Spring Elementary School in Falls Church. He enumerated some of the teacher losses to nearby school systems due to salary differences, and said there have been more than 9,000 requests for substitute teachers already this school year.

“We will do the best we can with what we have.” That was Fairfax County Board of Supervisors chairman (center) Sharon Bulova’s response to the public school system board chair Sandy Evans’ final presentation of their $2.8 billion FY2018 budget before a public hearing on April 4. 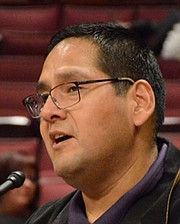 FCPS parent George Becerra of Burke brought up other counties around the country that impose a child investment tax after asking, “What do you do to get more revenue?” He also said there should be more representation at the county level of people of color, which he said would be more equitable based on the growth of non-white populations in Fairfax County. 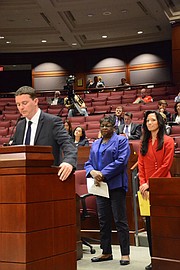 From left, Fairfax Education Association president Kevin Hickerson, Christal Tanks with FEA education support professionals, and FEA vice president Carla Okouchi said the FCPS budget is a “statement of our community’s priorities” and that problems such as the more than 170 teacher vacancies at the beginning of the school year “only compound if we turn a blind eye to them.”

“We will do the best we can with what we have.” That was Fairfax County Board of Supervisors chairman Sharon Bulova’s response to the public school system board chair Sandy Evans’ final presentation of their $2.8 billion FY2018 budget before a public hearing on April 4.

Evans opened the first of three days of public hearings on the full county budget for FY2018. Forty-seven speakers had signed up to address the board following Evans, who was joined in the main Fairfax County Government Center auditorium by several other members of the School Board, FCPS staff, teachers, principals and interim Superintendent Steven Lockard.

Based on the county budget advertised by County Executive Ed Long, their proposed transfer for FY2018 would fall short of the FCPS request by nearly $50 million.

“It’s clear, whatever we do, will only moderate this increase,” Evans said. “It won’t eliminate it.”

“There’s a gap,” she said, “even before we consider pay increases of any kind, any teacher scale adjustments.”

TEACHER SALARIES in FCPS, the School Board has repeated, have fallen short of surrounding school systems, which they say has lured away many experienced, trained teachers as well as strong candidates for new ones.

Overcoming obstacles including and stemming from what she said is disproportionate from the state and federal government relative to the rest of Virginia, as well as the growing number of high needs students in FCPS, can “only be solved by making necessary investments in our education system.”

Bulova acknowledged that “any member of this board will tell you education is our number one priority.” The chairman lamented that the proposed Meals Tax referendum did not past last fall, and that work to change the impact of the Virginia Retirement System “just didn’t happen as well.”

But Bulova praised the budget work being done jointly between the two boards. “Never before have we had a closer working relationship to try to achieve our mutual goals,” she said.

Two individual speakers, Joe Connor of Fairfax and James Parmelee of Centreville, each suggested the supervisors and school system could do a better job managing taxpayer money.

Connor was critical of the FCPS pension program ensuring county employees are “multi-millionaires at retirement” and that with the threat of cutting services to students, FCPS is “allowed to confiscate income from the private sector.”

Parmelee held up a sign from the fall 2016 election cycle encouraging residents to vote “no” for the proposed tax on prepared foods, or meals tax.

“People had a choice,” he said, “more taxes for what the majority claimed are necessary expenditures. People overwhelmingly voted against the tax a majority of you wanted.”

Parmelee said the supervisors should keep that in mind, perhaps alluding to the real estate tax increase passed in the previous budget cycle to help fully fund the FCPS budget.

“You all touched the hot stove, got burned a little bit,” he said of the meals tax. “I hope you’re a little wiser for it. Please don’t forget it.”

Two more days of public hearings on the FY2018 budget were scheduled for April 5 and 6.

THE COUNTY BUDGET COMMITTEE will meet April 21 for a pre-markup, before the full markup on April 25. The supervisors are scheduled to adopt the FY2018 budget May 2, followed by FCPS adopting an approved budget May 11.

More information from Fairfax County about its advertised FY2018 budget is available online at www.fairfaxcounty.gov/dmb/fy2018/advertised/overview.htm.

More information on the FCPS FY2018 advertised budget is available online at www.fcps.edu/about-fcps/budget/FY2018.