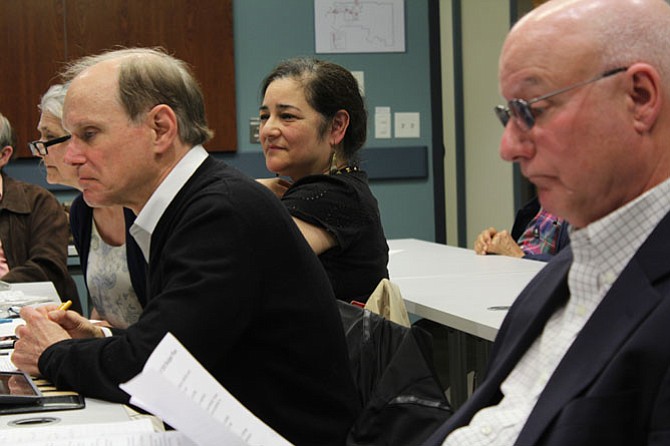 Great Falls — McLean citizens are not letting the county adopt its 2018 budget without hearing about their concerns.

While the Fairfax County Board of Supervisors must decide how to allocate $4.1 billion in general fund revenues for the fiscal year 2018 budget, the McLean Citizens Association asked the board to reconsider several proposals in its advertised budget, including funding for the county’s Diversion First public safety program for mental illness and avoiding an increase in school class sizes. The MCA Board of Directors approved a resolution affirming its budget priorities at its Board of Directors meeting on Wednesday, April 5, at the McLean Governmental Center.

The resolution, “Fairfax County Advertised FY 2018 Budget Plan,” summarized several resolutions the association already approved this year that were critical of the county’s funding of its schools and pension systems.

The Fairfax County Public Schools presented its budget for next school year to the Board of Supervisors on Tuesday, April 4— with a $48.4 million shortfall.

This means the county must contend with a nearly $50 million gap between what FCPS is requesting versus what it has available.

Before FCPS adopts its budget, which is planned for May 25, it will hold budget work sessions on Monday, April 24; Monday, May 1; and Thursday, May 18.

These work sessions will include discussion on closing this gap.

RECOMMENDED REFORMS INCLUDE changing its Educational Employees’ Supplementary Retirement System of Fairfax County (ERFC) pension system, which is projected to cost an additional $11.4 million in fiscal year 2018. The changes that the FCPS is considering include implementing $4.7 million in reductions to the system by June in time for the fiscal year 2018 budget.

The MCA has advocated for pension reform for years.

“We must reduce the cost of our pension plans,” MCA President Jeff Barnett said while testifying on the budget before the Board of Supervisors on Thursday, April 6. “We believe that the focus should be on the early retirement benefits for new and nonvested employees.”

Changes the FCPS is considering include lowering the interest crediting rate on all member accounts of the FCPS pension system from 5 percent to 4 percent. The FCPS is also considering more changes for new or nonvested members, including instituting a minimum retirement age of 55; increasing the period for calculating the final average salary from three years to five years; and changing the cost-of-living adjustment to equal 100 percent of the Consumer Price Index with a cap of 4 percent.

More cost-savings measures proposed by the FCPS include adding $3.8 million in athletic fees for students and delaying the start of music programs from the fourth grade to fifth grade, which would save $2.8 million, but would be unpopular with families affected.

Increasing class sizes for all grade levels by one student would save $22.8 million. The MCA strongly opposes this idea.

“Please communicate to the school board that excessive class size remains a major issue for McLean parents,” Barnett said. “Our classrooms run two to four students greater than the Fairfax average. Increasing our class sizes will only shortchange our kids.”

While the rest of the county’s budget is balanced, sacrifices were made to make it happen.

Some initiatives the county had previously prioritized will go without funding. The priority items that Edward Long Jr., the Fairfax County executive, proposes to cut in his advertised fiscal year 2018 budget include:

Not continuing the new Diversion First program, which offers alternatives to incarceration for people with mental illness or developmental disabilities who enter the criminal justice system for low-level offenses, $5.3 million

Not implementing the next phase of recommendations from the Ad-Hoc Police Commission, $7 million

Not increasing funding for employment and support for individuals with developmental disabilities, $6.7 million

IN ITS NEW RESOLUTION, the MCA urges the board to provide additional funding for the Diversion First and other unfunded county public safety programs by finding other cost savings.

The Board of Supervisors held public hearings on the county’s advertised budget April 4-6.