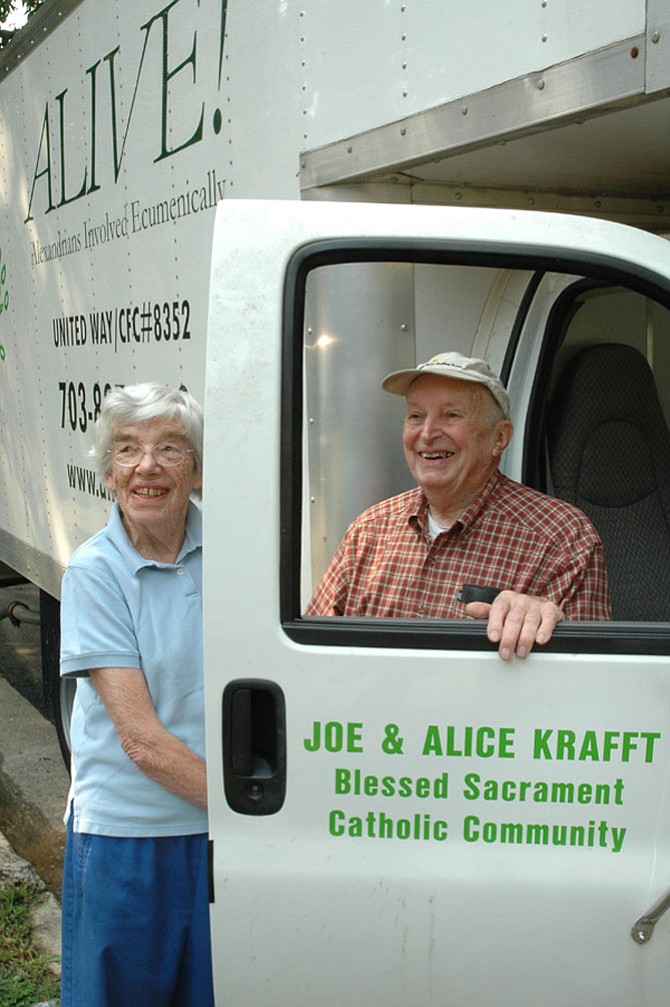 Joe and Alice Krafft in his 1929 Model A Ford Phaeton during a city parade.

Joe was born in Alexandria in 1923 to Jacob and Augusta Hirtreiter Krafft and had four sisters and two brothers. He grew up on Cedar Street, attended Maury and St. Mary’s elementary schools, and St. John’s Military High School. (He later taught at rival high school, Gonzaga.) He went to college at Catholic University and received his doctorate in physics in 1953.

As a boy growing up on the corner of Cedar and King Streets, Joe and his friends sledded down the terraces of the Masonic Temple. His mother Gussie offered meals to hobos who wandered over to Cedar Street from Alexandria’s Union Station during the Great Depression’s hard times. And his father Jacob recovered from that economic slump when his company won contracts to plaster the walls of the War Department’s new Pentagon building during World War II.

Joe spent his career as a research engineer at the U.S. Naval Research Laboratory in Anacostia. Before the Wilson Bridge was built, he commuted from Alexandria by ferry boat. Joe and his colleagues at the Lab led the world in developing a new engineering field called “fracture mechanics.” Fracture mechanics progressed from being a curiosity to a scientific breakthrough that revealed why WW II Liberty ships broke apart while at dockside and at sea. Today, fracture mechanics helps assure the safety of major structures including bridges, nuclear power plants, ships, and aircraft. Joe received the Navy Department’s Meritorious Civilian Service Award in 1978 for his work. He was a Fellow of the American Society for Metals International and a long time contributor to the American Society for Testing and Materials and the American Society of Mechanical Engineers.

Joe was a lifelong Alexandrian. He and Alice raised their eight children and lived at the same house on Oakcrest Drive for 67 years. He had a passion for fixing things, and in retirement this blossomed in his hobby restoring Model A Fords to mint condition. As a member of the George Washington chapter of the Model A Ford Club, he and Alice made many treks around the country, motoring in their vintage Model A Fords to Detroit (Ford factory and museum), St. Louis, and Indianapolis, where Joe did a lap around the Indy 500 Speedway. Joe also took pride in driving notable Alexandrians in the George Washington Birthday Parade, the Scottish Walk and the Del Ray Halloween Parade in his 1929 Model A Ford Phaeton, his favorite of the five Model A Fords he restored by hand.

Joe was an avid sailor, building his first boat, a Snipe, at age 15 in 1938 with younger brother Frank, followed by Penguin number 7 in 1940 for a neighbor and many more Penguins over the years. Joe and Alice sailed Pluto (Penguin No. 900) and Otulp (No. 999) to runner-up finishes in the Penguin Class National Championships in 1947 and 1949. Joe built Jo-Jo, Thistle No. 635, in his backyard in 1953 and spent many happy weekends racing with his eight kids and many friends on the Potomac River, Chesapeake Bay, and ports of call including Cape Cod, Mass.; Waukegan, Ill.; and St. Petersburg, Fla. Joe was an honorary life member of the Potomac River Sailing Association and enjoyed maintaining their crash boats and outboard motors for many years.

Joe was active in the founding of ALIVE!, ALexandrian’s InVolved Ecumenically, as a member of Blessed Sacrament parish. Here his volunteer service touched the most people. Working as a husband-and-wife team, Alice and Joe coordinated donations and delivery of furniture throughout the city for more than 40 years. Donations in Joe’s memory should be made to ALIVE, http://www.alive-inc.org/, 2723 King St., Alexandria VA 22302.

Joe’s burial will be private, and a celebration of his life will take place in May.