‘It’s Not Perfect, but a Good, Solid Project’ 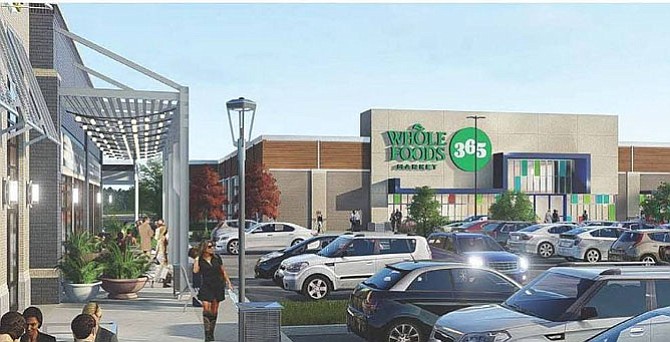 “This project could perhaps be a catalyst for future residential and mixed uses in the eastern part of Northfax,” said Councilwoman Janice Miller. “I’ll vote yes this evening and thank the developers for their current and future investments in our City.”

Before the vote, Senior Planner Paul Nabti presented details of the proposal. The applicant is Regency Centers LLC and the site is 6.27 acres along Fairfax Boulevard and Eaton Place. Regency will replace the existing, outdated, 68,500-square-foot shopping center with 48,200 square feet of commercial uses – a 30,000-square-foot grocery store and retail buildings of 5,000, 7,000 and 6,200 square feet.

However, Regency sought several special exceptions and other conditions from the Council because the land has certain constraints. “There’s a 500-foot-long retaining wall adjacent to Eaton Place, and the University Drive Extension will require 60 feet of right-of-way,” said Nabi. “The Fairfax Boulevard frontage has utility easements on the south side of the property, and 51 percent of the site is in a floodplain.”

THREE ACCESS DRIVEWAYS will be along Fairfax Boulevard, and one will be at a traffic light at University Drive. “Another access would be added for the grocery store,” said Nabi. “There’d be no access to Eaton Place, but the University Drive Extension provides it.”

He said the new uses are anticipated to generate some 1,750 fewer vehicles per day than now and are expected to yield annual, net revenues between $300,000 and $600,000. And the 325 parking spaces planned exceed the maximum number required. Work won’t begin until late 2018, but will start before the University Drive Extension project does.

Miller said she doesn’t want grocery-store delivery trucks to exit and go onto University Drive, and Public Works Director David Summers said the City can erect signs to prevent that from happening. Regarding aesthetics, attorney Evan Pritchard, representing Regency, said the buildings will have high-quality materials, clean lines and a modern look.

“We’re trying to improve the site’s overall appearance, and a Whole Foods 365 will make it attractive to a whole slate of retailers,” he said. “[This brand] also looks for a ‘friends’ retailer nearby – for example, a unique, local restaurant. It focuses more on the store brands and will also offer a coffee bar, microbrewery pub, quick-service sandwich-and-pastry bar, and prepared foods for a quick lunch.”

Pritchard didn’t know which specific businesses would go into the three, small, retail buildings. But, he said, “We want the retail uses to encourage visitors to linger there in the shopping center before going home. Our plan is to proceed with the design and be able to go forward with construction as soon as we get our LOMR.” (Letter of Map Revision from FEMA confirming a needed change to the floodplain boundary).

Councilman Jeff Greenfield asked if Whole Foods is “really coming here, or the developers just hope it will.” But Devin Corini, Regency’s vice president, investments, assured him that Whole Foods already signed the lease. He also said it would help if demolition and preliminary construction work could start as soon as possible. Summers said demolition shouldn’t be a problem, but “We have to work with the contractors.”

Several residents then commented during this project’s July 11 public hearing. Planning Commissioner Joseph Harmon said it should be denied because it doesn’t propose buildings along Eaton Place and “doesn’t have enough retail and commercial development that’ll lead to the City’s success. It’s more like a strip mall.”

Economic Development Authority Commissioner Chris Todd called Whole Foods a “great amenity.” But, he said, “This project is 31-percent smaller than what’s there today; we’ll get less tax revenue. And the three, small, retail buildings have no relation to the streets around them or to the University Drive Extension. Driving west on Route 50, the first thing you’d see is an enclosed dumpster, so I’d like the design improved. I don’t see that the City is served well by this.”

Representing Fairfax City Citizens for Smarter Growth, Douglas Stewart said Northfax “should have compact, small, walkable blocks. This proposal won’t do anything toward providing that or a mixed-use development there, and no business is oriented toward Route 50. Deny the special exceptions; instead, pursue a mixture of retail, housing and office at Norhfax.”

But former Mayor Steve Stombres said residents always ask him when they’ll see progress at Fairfax Shopping Center and Fairfax Circle. “Tonight, the City has an opportunity to address some of those frustrations,” he said. “This is a high-quality project. Residents of the region will be coming here to do their shopping, rather than leaving the City to go elsewhere.

“Whole Foods is a national store and the type of business we should be trying to attract,” he added. “Saying no would most likely result in the property owner giving the current buildings a quick facelift, and we’d continue having another strip mall with less-desirable tenants for the foreseeable future. The current proposal, even with its drawbacks, seems to be a positive step toward the long-term goals of our community and the best interests of the City of Fairfax.”

BUT RESIDENT Catherine Read said it’s “a mistake to build around a tenant. Tenants come and go; when I go shopping, I drive to Wegmans and meet all my neighbors. We had Harris Teeter and couldn’t make it stay; if Whole Foods 365 leaves, we’re stuck with an empty building. There’s no housing around there, so people can’t walk there.”

Greenfield, however, favored the project. “I drive by this location several times a day, and I’m tired of looking at a burned-out section and a furniture store that changes its name every two weeks,” he said. “Why would we want to walk away from a Whole Foods 365 and supporting retail, when we haven’t been able to get it at Fairfax Circle and Kamp Washington?”

He said his family walks a great deal and he knows three dozen residents who live nearby and would walk to this shopping center. “I’m hopeful we can create excitement about what the City has to offer,” said Greenfield. “This developer has delivered in the past on every, single project it’s done here. I’m happy to support this.”

Councilwoman Ellie Schmidt called it a “positive project for the City. It would be new and vibrant. The Comprehensive Plan acknowledges that uses should be flexible to market conditions, and I believe the Whole Foods 365 … would benefit the [nearby] Marriott visitors and the WillowWood office complex. It’ll provide fresh, revenue-generating businesses along Fairfax Boulevard and keep those dollars in the City. I believe this’ll be a success.”

“This will be a catalyst for future development on both the east and west sides,” added Councilman Dan Drummond. “It’s not perfect, but it’s a good, solid project that’ll bring other businesses and people here.”

Councilwoman Miller said she and many residents support the Whole Foods there, but she’s lukewarm on the additional retail. However, she stressed, “Regency has a good track record here and its completed projects are full.” And Councilman Jon Stehle said the new businesses will help increase walkability to this site.

Councilman Michael DeMarco said the shopping center can’t continue in its current form and the plan “will bring value to the City and make it a shopping destination. I’m excited about Whole Foods, but the balance of the project lacks creativity and sustainable development. This parcel will still be a strip mall, [but with] less retail than now. So I cannot vote in favor of the special exceptions, but will vote in favor of the certificate of appropriateness.”

The Council then approved the project, 5-1. “Parts of the City’s commercial areas are tired and not well-maintained,” said Mayor David Meyer. “I hope this project will provide all the benefits that have been expressed.”