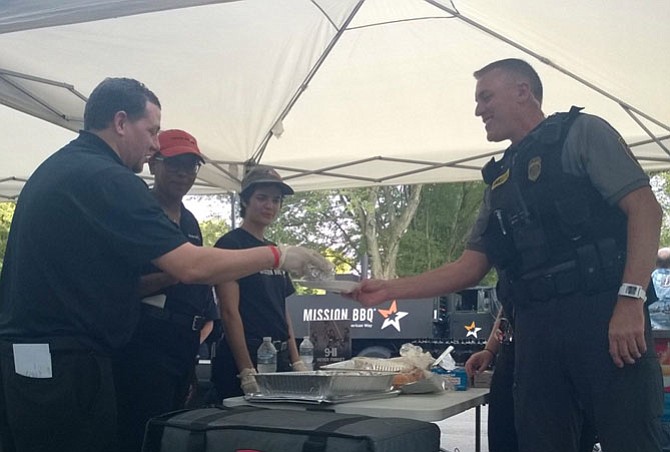 Mission BBQ General Manager Michael Ordonez and catering staff Amy Galloway, Nina Dalal and Victoria Everhart give a pulled chicken slider sandwich to Lt. Timothy Forrest Aug. 1 at a National Night Out block party in the Franconia Police District. “Our mission is to serve and serve those who serve,” Ordonez said. 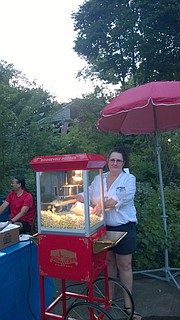 Bren Mar resident Sandra Mason, 51, bags fresh popcorn for her neighbors from the machine borrowed from the community pool house. She has lived in Bren Mar for four years and met many of her neighbors at last year’s block party.

Hotto, 35, away from his mom’s annual National Night Out block party in Alexandria., Aug. 1.

“I come for the free food,” Hotto admits as he hugs his mother — a neighborhood watch volunteer who throws the annual National Night Out block party in her tight-knit community tucked in a corner northeast of the Springfield Interchange.

So do the residents of Bren Mar and police officers of the Franconia District Station as they enjoy a potluck supper and pulled chicken sliders from the Mission BBQ restaurant in Kingstowne.

Since its June opening in the Landsdowne Centre at Beulah and Telegraph roads, Mission BBQ has made an effort to reach out to local first responders, Ordonez said.

National Association of Town Watch founder Matt Peskin said Tuesday this is the 34th year of National Night Out, which promotes partnerships between

Cristina Rodriguez, 19, of Fairfax County Police Explorer Post 2252 helps Reedha Zarman, 8, of Alexandria turn on the lights of a police cruiser as McGruff the Crime Dog keeps his cool on a humid summer evening Tuesday during National Night Out block party in a cul-de-sac on Indian Run Parkway.

communities nationwide and their local police to make their neighborhoods safer places to live.

THIS INITIATIVE started in 1984 with 400 neighborhoods and this year sees 16,000 registered communities across America. He says neighbors often meet for the first time on this particular night.

“It’s an important program,” says Peskin, who believes getting to know your neighbor is the crux of crime prevention.

“We keep each other advised if something’s going on if not appropriate,” Bolds said. She has lived in the neighborhood for 21 years. Bolds raised two children who attended school with Phillips, 39. Janice Grogin, 67, says her late mother was an original resident of Bren Mar since their family home was built in 1956. They notice many people who move to their neighborhood stay a long time.

According to its 2016 annual report, the Fairfax County Police Department has more than 1,400 law enforcement officers in a jurisdiction that boasts more than 1.1 million residents. It operates on an annual budget of more than $182 million dollars.

Franconia is one of eight district stations in the county with 125 police officers who help more than 130,000 residents in a long precinct in southeast Fairfax County, squeezed on both sides by Interstate 95 and Fort Belvoir.

“Building trust in the community,” he said, “helps the department address quality of life issues.”

Although her neighborhood of more than 425 homes has no formal watch group, Bren Mar resident Sue Hotto, 68, has bridged her community with their local law enforcement agency for 15 years. She was part of the first graduating class of the Fairfax County Citizens’ Police Academy.

Since her retirement from Gallaudet University, Hotto also has carved out time to serve Bren Mar as president of the Citizen’s Advisory Committee — which meets the third Wednesday of each month September through June at 7 p.m. in the Franconia District Station’s community room at 6121 Franconia Road in Alexandria.

Crime Prevention Unit MPO Allie Eggers says her station has a great relationship with Hotto and together they organize community donation drives during the holidays for area food banks.

Hotto’s son admits when he was a teenager, he used his dad’s car once to test drive his boundaries and was busted by his mother. He believes her tireless efforts as a volunteer for police service helped straighten him out.

“We beat out Mason,” he exclaimed. “We’re now the largest in the county.”

VISIT natw.org to learn more about organizing a block party or carnival for next year’s National Night Out.

For information on crime prevention and awareness, visit the FCPD website at www.fairfaxcounty.gov/police.