Back to School at Samuel Tucker Elementary
Votes

Back to School at Samuel Tucker Elementary 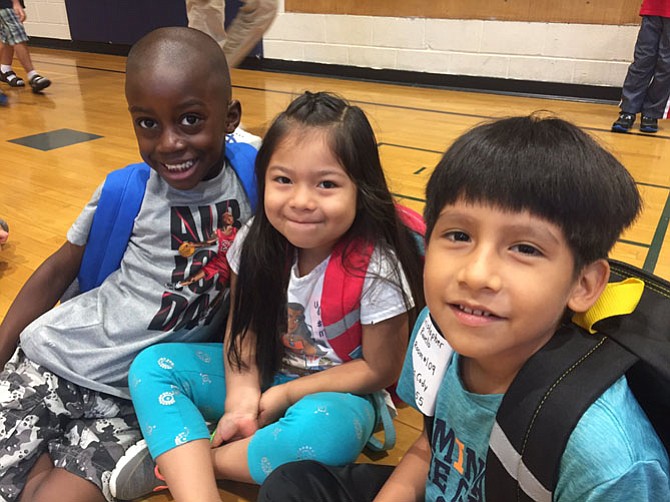 “You get that beginning of the year energy and excitement. What’s surprising is the genuine embracing of this early start. These kids are ready to go back.” — Principal Rene Paschal

Most Alexandria students have a few weeks of summer left. There’s still time for a last minute vacation or a few more summer sleepovers. But Samuel Tucker Elementary isn’t like most schools. After a five-week summer break, the year-round program at Tucker kicked off again on Aug. 3.

“Every [year] it starts off the same,” said Principal Rene Paschal. “You get that beginning of the year energy and excitement. What’s surprising is the genuine embracing of this early start. These kids are ready to go back.”

Pascal says the key to offering a positive year-round school experience is making sure students see school as more than just a classroom. Pascal adds that his school has the best playground in the area.

According to the Association of Curriculum and Development (ASCD), research shows year-round schools are slightly better in academic achievement than schools with extended summer breaks. ASCD also notes that year-round education can also be beneficial for low income families who cannot afford summer school or programs for their students. The majority of parents with students in year-round schools express a favorable opinion of the program. The idea has hit some bumps in Alexandria though. The Mount Vernon Community School was also briefly a year-round program and a dual-language program, but in 2014 then-Principal Peter Balas decided to cut the year-round program and focus funds and resources on the dual language program.

It’s Paschal’s seventh first day as principal of Tucker. Each time, Paschal says he gets a little more relaxed and a little more confident in the leadership team. He has a little extra help today, with former assistant principal Victor Powell coming by to assist with the day one activities and get back into the swing of things. It was a momentary throwback for Powell, who this year takes over as principal of Matthew Maury Elementary School.

Paschal says the first day is always focused first and foremost on safety and security.

“We’re getting the kids into school and out through the the day,” said Paschal. “Then at lunch you have to worry about food allergies and then about lunch money. Then it’s about getting kids home. It’s complicated, because everything is new for the kid.”

In the school’s office at the end of the day, administrators are scrambling to find a student who is not on the proper assigned bus. A flurry of phone calls are made with administrators reaching out to everyone who might have been with the child at various points of the day. Within minutes it’s discovered that the student got on a bus with her sister, different from the one originally scheduled.

“We only had one kid left on a bus today,” Paschal said. No student is allowed to get off the bus if they don’t have a parent there to pick them up, which Paschal says can be a source of frequent frustrations in phone calls and parent conferences.

Paschal said it’s often the parents who have a hard time letting go on the first day of school, which is why the PTA sponsors a “Boo-Hoo Breakfast” for parents dropping their students off for the first time.

At the first administrative meeting this week, Paschal says there’s a tradition where teachers and administrators share their best day one story. Paschal already has his picked out. After dropping off his child, a parent came up to Paschal on his way out and said he was so happy to see that the students in the classroom had already sat down and were getting to work before the bell had rung.