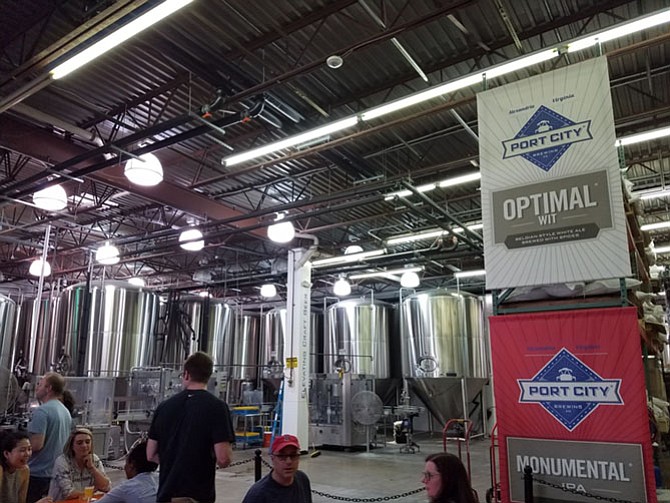 Fans of Port City Brewing braved the summer heat on Friday, Aug. 4 to get their hands on a cold one (or three) at the Port City World Headquarters in Alexandria. The main attraction was Oktoberfest, the brewery’s acclaimed and award-winning seasonal lager, which was released on Friday. The event drew crowds of thirsty patrons, as well as a Puerto Rican cuisine food truck and a live band, Wes Tucker & the Skillets. The lager, which is released in late summer annually, is only available for a limited time; those who miss out on this year’s batch will have to wait until 2018 to get a taste, as Port City Brewing respects Oktoberfest’s seasonal history.

“Traditionally, Oktoberfest is a harvest beer, and traditionally it goes back to before refrigeration,” said Bill Butcher, founder of Port City Brewing. “This was a beer that was brewed in March, and then it would be cellared throughout the summer and the beer would be ready for release at the end of summer around harvest time. It usually sells out in mid-October.”

The release event has seen a steady increase in popularity, as has the brewery since its inception in February 2011.

“The popularity of the release event has grown year over year, just as the company has grown and more people have become aware of our beer and of our brewery,” said Butcher. “So it seems to get more and more popular every year.”

There’s a reason for the large crowds that attended the release event: Oktoberfest is an award-winning lager, and one of Port City Brewing’s most popular seasonal items.

“I think people anticipate that this is one of our most popular seasonal beers, and it’s an award-winning beer,” said Butcher. “It won a silver medal at the Great American Beer Festival. It has quite a bit of market recognition, so there’s high expectations and a lot of anticipation around the release of this beer.”

It’s a beer that is great for quenching a summer thirst due to the refreshing qualities it possesses. “The beer is a Vienna style lager,” said Butcher. “It’s very refreshing and it’s heavily focused on malt, so the beer is malty and bready and has a very refreshing quality to it. One of the things that makes it special is that we lager the beer for six weeks in the tank developing its special flavor characteristics.”

“This is a great place,” said Mike Marion, a weekly customer of the brewery. “The people who work here are friendly. They’re great people. I know a lot of them personally. [The beer] is also constantly good, from one year to the next. I would recommend it to anybody, as long as they like beer.”

Port City’s page about Oktoberfest is located at http://www.portcitybrewing.com/the-beer/oktoberfest/