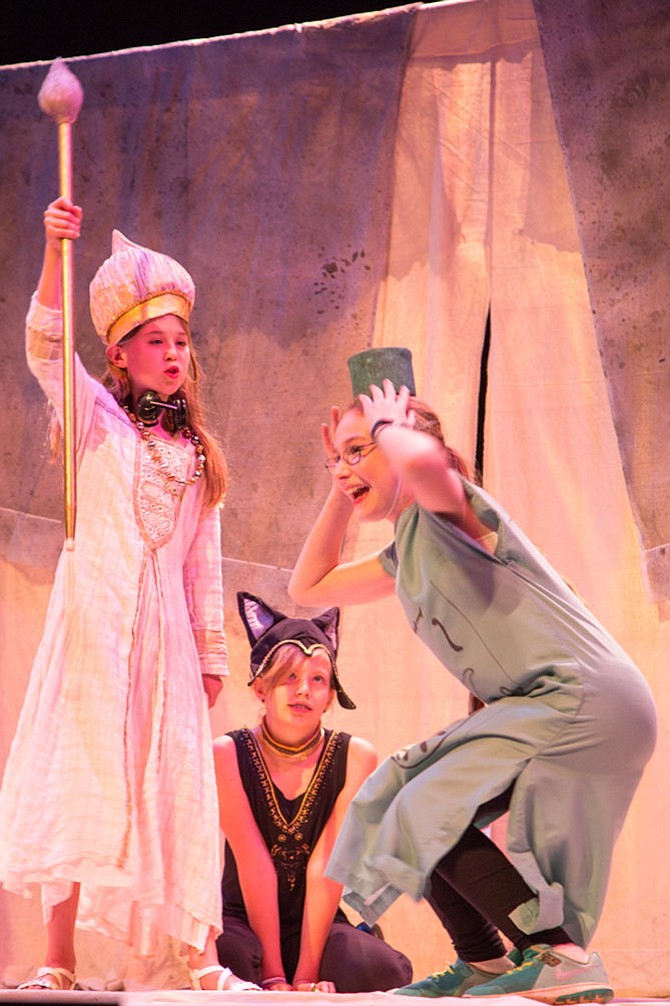 Niono played by Paige Merten, Claire Daly, playing the part of Bastet, and Thoth, played by Chloe Flye perform in The Traveling Players production of “Atum’s Eye,” set in ancient Egypt at The Madeira School in McLean. Photo by Colin Stoecker/The Connection

Producing and Artistic Director Jeanne E. Harrison, a Great Falls resident, founded the non-profit company, The Traveling Players Ensemble in 2003 in her community to teach self-expression, self-reliance, and professional theatre.

From left: Staff for the Traveling Players Ensemble pictured here are Michael Oosterhout, 21, program manager, Anna Stevens, 19, a videographer, Jeeho Ha, 18, an incoming freshman at University of California San Diego, a camp counselor and former camper herself, and Jessica Kemp, 22, a shop assistant and stage designer. 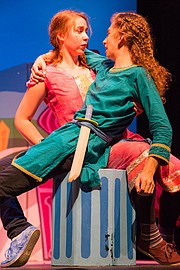 Members of The Traveling Players Ensemble perform William Shakespeare’s “Comedy of Errors,” at The Madeira School. Eli Wassertzug, McLean resident, right, has a lead role in the play.

“Traveling Players Ensemble Presents Four Plays of Love and Transformation.” The final performances will take place at 3 p.m. Friday, Aug. 18 at The Madeira School in McLean.

Four Plays of Love and Transformation include:

Tickets are $10 and are available at the door.

Producing and Artistic Director Jeanne E. Harrison, a Great Falls resident, founded the non-profit company in 2003 in her community to teach self-expression, self-reliance, and professional theatre. “Tonight is everything coming into fruition after two weeks of traveling, the kids have transformed,” said Harrison. “I get 18 year olds to memorize 400-year-old words and to spit ‘em out with sense,” she said.

The camp has been recognized by the National Endowment for the Arts (NEA) for its exemplary performance as a “Summer School in the Arts,” in Northern Virginia.

The camp is for two weeks for the youth players, fifth to seventh graders, and they get to learn in an intensive acting environment and produce the play at the end of their session. The program is modeled after the origins of theatre, when troupes of actors roamed the countryside using what they had to perform.

The older students attend camp sessions up to 7 weeks. The traveling troupe of mostly high school students completes five weeks of intensive rehearsals before embarking on a two-week tour of Virginia, Pennsylvania, and West Virginia. Stops on their tour included historic Blackfriars Playhouse in Staunton, Va. and Colonial Williamsburg.

Michael Oosterhout, 21, program manager with the Traveling Players Ensemble is in his third year working with the troupe. “The kids are the best part, they bring the joy and energy,” said Oosterhout. “My only regret is that I didn’t get to go to the camp as a kid.”

Nairi Nadjarian, 11, resident of Arlington, a rising sixth grader at Williamsburg Middle School played the part of Cleo, a tomb raider, in “Atum’s Eye.” “I really liked it, I was nervous at first, but it was fun. I never took any acting classes before this,” said Nadjarian.

Clara Richmond, 10, a fifth grader at Churchill Road Elementary and McLean resident played the part of Tefnut in the youth players production of “Atum’s Eye.” “I like making the audience enjoy it. It was fun because the dad was telling the story, and the ensemble was acting out the story for the audience,” said Richmond.

McLean resident Jeeho Ha, 18, an incoming freshman at University of California San Diego is a camp counselor and former camper herself. “The staff here are unique here and they lead by example. I was blown away by the amount of attention the staff give to the campers,” she said.