In Their Shoes in Arlington
Votes

In Their Shoes in Arlington

Activists rally outside county offices in support for immigrant protections. 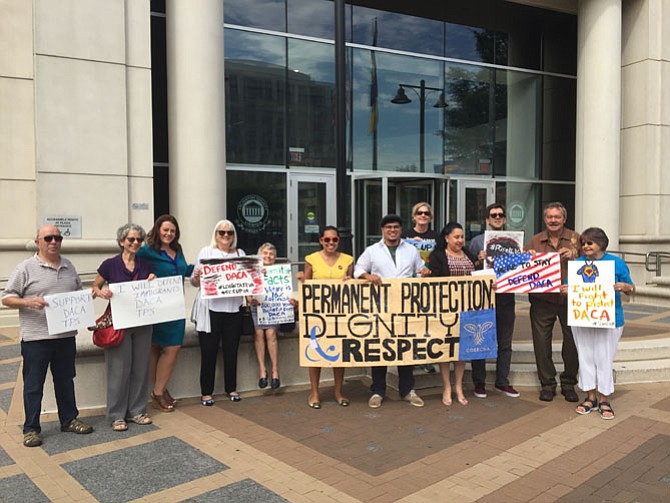 There’s about 70 miles between Charlottesville and Richmond. Lizzette Arias walked all of them.

Arias was one of a dozen local activists who gathered outside the Arlington County offices on Aug. 24 to announce #RiseUpVA, a four-day walk from Charlottesville to Richmond. According to Arias, the march is in protest to crackdowns on the immigrant community from the federal government. Activists at the Rise Up event highlighted two particular threats: the Trump administration’s ongoing efforts to repeal Deferred Action for Childhood Arrivals (DACA), which gives youth brought to the country illegally protection from deportation and work visas, and Temporary Protected Status, which shelters immigrants from countries facing military or environmental catastrophe.

“This is what Virginia looks like; neighbors coming out to support each other regardless of their skin color,” said Arias. “[This march] is in response to the strengthening deportation machine and the threats to repeal DACA and TPS ... Life in the shadows is hard. It’s time to rise up.”

At the gathering, activists from a range of backgrounds shared their stories and expressed their support for immigration protections.

“People need to understand; immigrants are people,” said Chavez. “They deserve dignity and respect. I’m tired of people treating us as less than. We want to project that message, so people know that we’re here to stay.”

According to Beatriz Amberman from the Virginia Coalition of Latino Organizations, 10 states are undergoing efforts to remove the protections DACA and TPS. Amberman and others cited a Cato Institute study on illegal immigration by Ike Brannon and Logan Albright, which noted substantial economic benefit from immigration protections like DACA.

“We estimate that the fiscal cost of immediately deporting the approximately 750,000 people currently in the DACA program would be over $60 billion to the federal government along with a $280 billion reduction in economic growth over the next decade,” the report stated. “Since DACA applicants pay their own processing fees, the program itself does not have an administrative cost, and so the only costs we need to evaluate are those that stem from having these people in the country in the first place. We submit that any such costs are far outweighed by the benefits that come from immigrants who are able to work openly and legally, pay taxes, support entitlement programs, create jobs, innovate, and sire children who will one day do the same.

“The deportation of DACA participants would cost the American economy billions of dollars, as well as billions of tax dollars foregone, while doing little to address the true concerns that Americans may have about unauthorized immigrants.”

Amberman pointed to economic benefits of having a new, young workforce in a rapidly aging American population. This was one of the reasons Norma Kacen, an 82-year-old Arlingtonian, came out to support Rise Up. Kacen is one of the cofounders of NOVA Friends of Refugees.

“We as a country need DACA to promote a flourishing economy,” said Kacen. “Open your eyes, open your ears, recognize the benefit to us that’s coming. It’s more than a question of morality, although it is that too. It’s a question of economics.”

Kacen also says her support of immigrants and refugees is rooted in her own family’s experience. Kacen was born and raised in a tight-knit Italian immigrant community. Her family was imported to work on the railroad and faced discrimination.

“I’ve seen the pain of being belittled and humiliated,” said Kacen, “and I’ve seen the contributions of immigrants to this nation.”