Alexandria: From the waterfront to the West End. 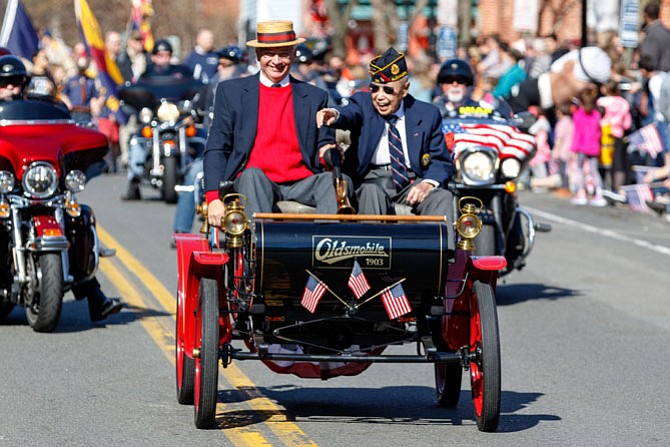 Alexandria is home to several signature events, including the George Washington Birthday Parade. This year World War II veteran Col. Kim Ching, right, waved to the crowd from Bob Geier’s 1903 Curved Dash Oldsmobile as the parade made its way through the streets of Old Town. Photo by Mark Mogle/Gazette Packet

“I don’t think you can call yourself a local if you haven’t eaten at Al’s Steakhouse.” — Seventh generation Alexandrian Nicholas Marinoff

The annual St. Patrick’s Day Parade takes place the first Saturday in March and kicks off a month-long celebration of all things Irish. This year Madison Kennedy enjoyed the parade atop the iconic Hard Times Horse. 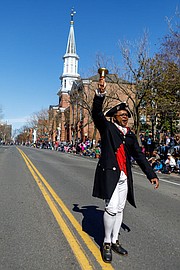 Ben Fiore-Walker is Alexandria’s Town Crier and is often seen welcoming visitors to the city or leading parades such as the George Washington Birthday Parade in February.

A 12-foot white skiff served as a blank canvas for painters of all ages as part of Seaport Day 2016. Sponsored by the Alexandria Seaport Foundation, the day-long event is held in September at Waterfront Park. 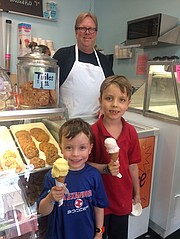 The City of Alexandria celebrates its birthday each July at Oronoco Bay Park. The event features a concert by the Alexandria Symphony Orchestra and cannon fire during the grand finale fireworks display during Tchaikovsky's “1812 Overture.” 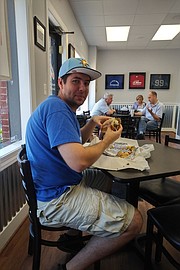 Nicholas Marinoff, a seventh generation Alexandrian, traveled 1,000 miles from his new home in Florida to visit the recently reopened Al’s Steakhouse in Del Ray on Aug. 22. The restaurant, which closed last year because of a fire, has been a local favorite for more than 50 years.

There is no shortage of accolades for Alexandria, from being named a Top Holiday Town by USA Today to being recognized as having the best downtown of any small to mid-size city in the nation by the website Livability.com. But beneath the parades and festivals that draw visitors from around the world are the hidden gems that make the city unique.

“I don’t think you can call yourself a local if you haven’t eaten at Al’s Steakhouse,” said Nicholas Marinoff, a seventh generation Alexandrian who drove 1,000 miles from his new home in Florida to eat at the recently reopened restaurant in Del Ray. “Al’s is one of the best things about this city.”

At 15.4 square miles and with a population of just over 150,000, Alexandria hosts nationally recognized events such as the Scottish Walk Weekend and Del Ray’s Art on the Avenue that attract more than three million visitors each year. But off the beaten paths of King Street and Mount Vernon Avenue are attractions such as the Tomb of the Unknown Revolutionary War Soldier and the National Inventors Hall of Fame.

“This is a very special place,” said astronaut Buzz Aldrin of the National Inventors Hall of Fame when he attended an event there last year. “No other place celebrates the history and innovation of our nation.”

Another Alexandria landmark is the Captain Rocky Versace Plaza and Vietnam Veterans Memorial. Located in front of the Mount Vernon Recreation Center, the plaza honors the 67 Alexandrians who lost their lives in the Vietnam War.

In the West End are the Fort Ward Museum and Historic Site and the Winkler Botanic Reserve.

One of the city’s most obvious landmarks is also one of its best kept secrets. Located on 36 acres overlooking Old Town, the George Washington National Masonic Memorial was built in the 1920s as a memorial and museum highlighting the contributions of Freemasons to the United States. The structure also serves as a research center, library, community center, and performing arts center and offers one of the best panoramic views of the city.

It doesn’t take long for even a newcomer to realize that Alexandria is a city that loves its festivals and parades, starting with the largest George Washington birthday celebration in the country followed closely by the nation’s first St. Patrick’s Day Parade on the first Saturday in March.

“St. Patrick’s Day isn’t until the middle of the month,” said Pat Troy, who founded the parade more than 30 years ago. “This way we turn the entire month of March into an Irish celebration.”

Alexandria celebrates its birthday in July with a concert by the Alexandria Symphony Orchestra and fireworks display complete with cannon fire and Tchaikovsky's “1812 Overture.”

Thanksgiving brings the Del Ray Turkey Trot, followed closely by the Scottish Walk Weekend and the Holiday Boat Parade of Lights on the Potomac River.

The year both ends and begins with First Night Alexandria, a day-long celebration with live entertainment that culminates with a fireworks finale over the Potomac River.

When it comes to entertainment, locals head to a performance by the Alexandria Harmonizers or Alexandria Singers or take in a show at MetroStage or the Little Theatre of Alexandria.

But what many consider to be Alexandria’s finest attraction is its sense of community and service. Organizations like the Rotary Club, Senior Services of Alexandria or Volunteer Alexandria provide an opportunity to get involved or lend a helping hand to some of the city’s most vulnerable citizens.