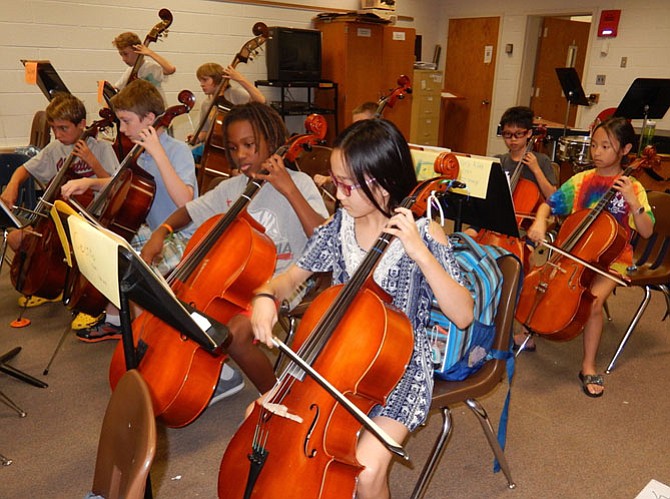 Cello players focus on their music during an intermediate-orchestra rehearsal. Photo by Bonnie Hobbs. 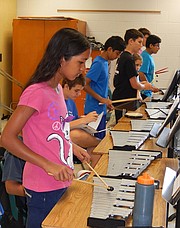 summer during the 31st annual Band and Orchestra Camp. It ran June 28-July 21, and 610 fourth- through ninth-graders attended.

“For elementary-school kids, one day of camp is equivalent to a month of music in school,” said camp Director Lawrence Walker. “For middle-school kids, their time here is equal to what they’d get in a year of music classes at school.”

On the first day of camp, the young musicians audition for placement in various levels of band and orchestra, such as beginning, intermediate and advanced. And Walker said things went very well during the whole three-and-a-half-week camp.

“The kids are here because they want to be,” said Walker. “And if they aren’t, initially, they interact with kids they didn’t know before and become friends. Then they get excited about preparing for the end-of-camp concert and, later, being in their school’s band or orchestra. Once they return to school in the fall, they’re far ahead of their music peers.”

Walker began this camp, more than three decades ago, and has guided it, ever since. “I live one minute away, in Franklin Farm,” he said. “And I love the people and school community, music education and seeing kids who leave here to become professional musicians — and I know [their careers] started at the camp.”

He retired in 2012 after teaching 30 years in Fairfax County Public Schools — 28 of them as Franklin’s band director. And the Lawrence Walker Music Wing there bears his name.

“This community was so good to me when I taught here, and I’m glad to give back,” said Walker. “Principal Sharon Eisenberg loves having the camp at Franklin, and I have a passion for students and music — and you never outgrow music.”

For the students, camp was both a fun and a learning experience. “It’s my first time here, but I really like it,” said Greenbriar West sixth-grader Abigail Kim. “I like playing the flute and being with my friends, and there are people here to play it with.”

She chose the flute “because it sounds nice and I always wanted to play it. My cousin plays it, too. Here I learned the chromatic scale and some new notes. I’d recommend this camp to others because the band is awesome and the teachers teach well.”

Poplar Tree sixth-grader J.J. Viswanathan has played flute since he was 4. “My granddad played it and passed away before I was born, and I wanted to play it because of him,” he said. “And my uncle is a famous flute player in India. It’s a really melodious instrument — and not a lot of boys play the flute — so I’m trying to inspire them to play it, too.”

He attended camp for his second time and especially liked his flute teacher, Teri Davis. “I’ve learned some new music and notes, plus the chromatic scale,” said J.J. “The teachers are really nice and help you with the music if you get lost, and you can make new friends.”

Tara Sankner, a Franklin seventh-grader, has played the flute for two years. “I love the sound,” she said. “And my mom played it, and that really influenced me. At camp, I learned how to play the 16th notes with a slur [connecting them].” She, too, called the teachers helpful and nice, as well as funny, and said she’s looking forward to playing in Franklin’s band.

Rocky Run orchestra teacher Stephen Matthie, in his 10th year of teaching at the camp, conducted the most advanced orchestra there. “I was a product of this camp when I was a student at Brookfield Elementary and Rocky Run Middle,” he said. “So for me, it’s a pleasure to give back to the students, just like the teachers gave back to me when I was a kid.”

Often, said Matthie, “Students won’t play, at all, during the summer, unless they have a reason. So this is a wonderful opportunity for them to play music with their friends, get great instruction and keep up their skills for the next school year.”

Alexandra Krumdieck is in seventh grade at Rocky Run and has played viola since fourth grade. “Cello and bass are too low for me, and the violin is too screechy,” she said. “And I have small hands, so it’s easier for me to reach the notes on the viola.”

In her third year at camp, she said, “I always love the teachers — they’re friendly and kind — and there are no report cards here. I also love the music and the different methods the teachers have of conducting it. All the songs are amazingly great, and I learned how to play a tremolo — playing really fast at the tip of the viola. This camp is very helpful; you learn a lot of stuff that your school music teachers might not have taught you — and if they did, you improve your skills.”

Meanwhile, Willow Springs sixth-grader Nathan Kim is in his fifth year of playing the cello, and this was his third summer at the camp. “It’s fun, and I meet a lot of new friends,” he said. “There’s a wide variety of people here from different schools.”

He selected his instrument because he likes its “deep, smooth sound, and cello plays the melody of a piece of music. And you don’t have to play it as fast as the violin.”

As for the camp, said Nathan, “It’s good for beginners because they teach you how to play. And after I first came here, it taught me so much that I got into the advanced group at school. This time, I learned how to play new songs, different notes and different ways of playing, like shifting on the fingerboard.”

One of the instructors was Consuelo Sevilla, who teaches orchestra at Sangster Elementary in Burke. “When I was a music-education major at JMU, I taught violin classes at this camp,” she said. “This year, I direct the intermediate orchestra for second- and third-year players. [The camp’s assistant director] Cindy Crumb recommended that I teach here because she knew I wanted to be a violin teacher in the future, so this would be good experience.”

“I’m excited to direct the entire orchestra — mostly sixth- and seventh-graders and work with the students,” continued Sevilla. “The students who attend camp really want to be here, so their attitude every day is really encouraging. And because the camp is several weeks long, we get to build a real community. And then, at the end, we get to play our concert and show everyone what the students have learned.”

Fellow violinist Shriya Ramaka, a Rocky Run seventh-grader, has been playing her instrument four years. “I like strings, instead of band, because band’s too loud,” she said. “And I like high notes because I sing high.”

It was also her fourth year at camp. “I just love the environment,” she said. “It’s very friendly and everyone’s really nice. If you play something wrong, they don’t laugh at you; they’re very supportive. And I get to see some of my friends from school.”

Sasha Smith, a Lees Corner sixth-grader, has played the tuba for a year. “I like the low sound, and it’s a unique, cool instrument,” she said. Sasha performs with her school band and came to camp for her first time. “I wanted to play my instrument during summer,” she said. “I learned new scales, and this was more challenging than my regular, music class at school.”

She’d recommend this camp to others because “It gives you a chance to explore your instrument and have more time to play it. And it really helps you understand how to play it better and improve. I’ll definitely come back next year.”

As for Libby Bondi, the Franklin eighth-grader has played violin since fourth grade. “It gives me a sense of relaxation, and I feel like I’m really good at it. I like to play fast-paced songs, and the fiddle songs give me a challenge. My favorite song at camp was “Perpetual Fiddle Motion.”

In theory class, she learned about intervals and how to count eighth rests. “That’s important because it’s not just the music you need to learn, it’s all the other parts of it that make it a song,” she said. Libby returned for her second year at camp — and encourages others to attend — because “I had such a good experience here last year and did much better in my school orchestra because of it.”