About 75 students serenade guests with holiday carols over catered meal. 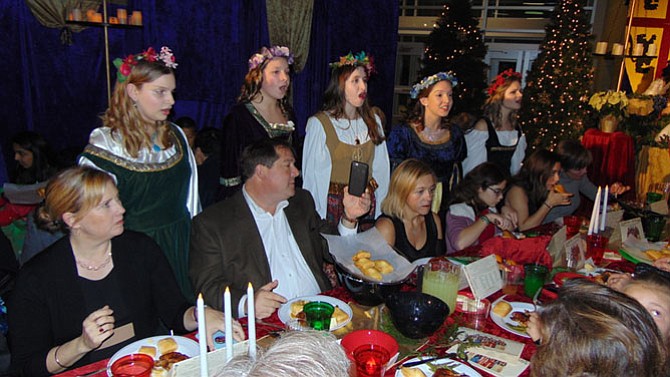 Maggie Worden and Ellie Smedberg carry the boar's head during the Renaissance Feaste.

Langley High School's Chorus presented the 15th annual Renaissance Feaste last Friday and Saturday nights, Dec. 1-2, where 75 students dressed as Medieval-costumed jesters, minstrels and musicians serenaded guests with holiday carols while they feasted on a catered meal from Boston Market. The show at "Langley Halle" that was decorated like Merrie Olde England was sold out both nights, serving about 330 guests.

"We try to imagine it as an old Medieval castle and we've decorated it that way. So it's the tradition that would have happened in the Renaissance – so there's lots of dialogue, lots of music and food to eat and drink," said Dr. Mac L. Lambert, Jr., Choral Director at Langley High School.

"We sing carols in English from France, Germany and Italy. These are all traditional carols that would have been sung around this time from many different countries. In addition, the Madrigals are performing several traditional Madrigal songs."

During the show, students serenaded guests and served a catered meal ($20 per student; $35 per adult) from Boston Market, which included roast chicken, green beans, mashed potatoes with gravy, salad, breads, cheeses and fruit.

In addition to the familiar "Deck the Hall" and "What Child is This," students also sang songs like "Gloucestershire Wassail," "Touro-louro-louro," "Deo Gratias," and "Fum, Fum, Fum." The Madrigals have a total of 20 students; the Chamber has 10; the Concert Choir has 20; and the Treble and Select Treble Choirs have 27 students.

Interspersed throughout the singing were students who discussed the traditions of the Madrigals, how that singing came to be, as well as a presentation of the boar's head and plum pudding.

Students were dressed in colorful Renaissance costumes created 15 years ago by Judy Harkins which are still being used. The students rehearsed for the show for a month and a half with a lot of extra rehearsals after school.