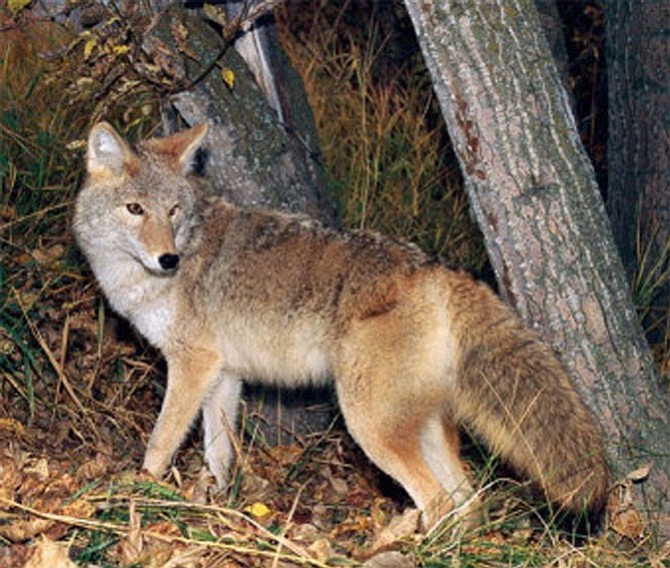 A dog is believed to have been killed overnight Sunday in a suspected coyote attack in the 7000 block of Bradley Circle in Annandale. The pet had been let out in the backyard of a home to use the bathroom, and could not be located by its owner hours later. When the owner went back out to look again, the dog was found dead just outside the yard. An animal matching the description of a coyote had been seen nearby both before and after the suspected attack — according to FCPD news release.

Wildlife officials have experienced an increase in the number of calls reporting coyote sightings in recent weeks across Fairfax County. Coyotes are now established and widespread in Fairfax County so it is important for residents to know and understand a bit more about them in order to safely coexist with these secretive wild neighbors.

Coyotes are medium to large sized members of the canine family, which includes wolves, foxes, and dogs. They have pointed and erect ears, a long, slender snout, and a bushy tail pointed downward. Fur coloration varies from reddish-brown to tan, gray or black with a pale blaze on the chest. The tail usually has a black tip and is held downward while running. Coyotes average 30-40 pounds but can weigh as much as 60 pounds.

COYOTES PLAY an important ecological role as a natural predator that may help to regulate and balance other wildlife prey species that are abundant in Fairfax County. Coyotes are opportunistic foragers with diverse diets that commonly prey on small animals such as rodents and rabbits but will also readily eat reptiles, amphibians, insects, fruits, plants and carrion. Coyotes may also take larger prey such as turkeys and white-tailed deer (primarily fawns).

Coyotes are seldom encountered but probably live nearby, even if you haven’t seen them. Pets left unattended outside may be at risk to coyotes, especially during nighttime and early morning hours. Coyotes may mistake small, unattended pets including cats and small dogs as prey due to their similar size to natural prey. Coyotes are territorial and may view larger dogs as a threat. This behavior may be more pronounced during the mating season (January-March) and when coyotes are caring for their young (March-August). Wildlife officials recommend that residents maintain supervision over pets when outdoors and keep them inside whenever possible to reduce encounters with coyotes and other wildlife.

Most coyote encounters in residential areas stem from attractants in the form of available food or den sites. In urban areas, garbage, compost and pet food may become alternative food sources. Feeding or unintentionally providing food for coyotes is a primary concern by wildlife officials as these actions may result in coyotes becoming less wary of humans or cause them to display bold and aggressive behaviors.

Unprovoked coyote attacks on humans are very rare. In most cases where coyotes have acted aggressively, a coyote is responding to the presence of a dog, is in close proximity of a den with pups, or has become too comfortable around humans, often a result of people feeding them.

PRECAUTIONS should be taken in areas where coyotes are active to minimize encounters with people and their pets. Preventive practices such as reduction and removal of food attractants, habitat modification and responding appropriately when interacting with wildlife are keys to minimizing the likelihood of conflicts with coyotes.

IF A COYOTE IS SIGHTED around your residence, let it know it will not be tolerated. Use hazing techniques to frighten coyotes from the property or exclusion measures to restrict their access in areas where they are unwanted. In some cases, repeat hazing attempts may be necessary to get a coyote to leave an area.

If these techniques do not solve the problem, Virginia regulations allow nuisance coyotes to be removed by a licensed trapper or critter removal service. It is illegal in Virginia to trap and relocate wildlife to another area.

If coyotes are behaving aggressively or appear sick or injured, contact the Animal Protection Police through the Fairfax County Police non-emergency number at 703-691-2131.

For additional information on managing wildlife interactions and resolving human-wildlife conflicts, the Virginia Wildlife Conflict Helpline is available toll-free at 855-571-9003, 8 a.m.-4:30 p.m., Monday through Friday. This helpline is a collaborative effort between the Virginia Department of Game and Inland Fisheries and the U.S. Department of Agriculture – Wildlife Services.