In the Kitchen: Meet Chef Eric Reid at Reserve in Alexandria
Votes

In the Kitchen: Meet Chef Eric Reid at Reserve in Alexandria 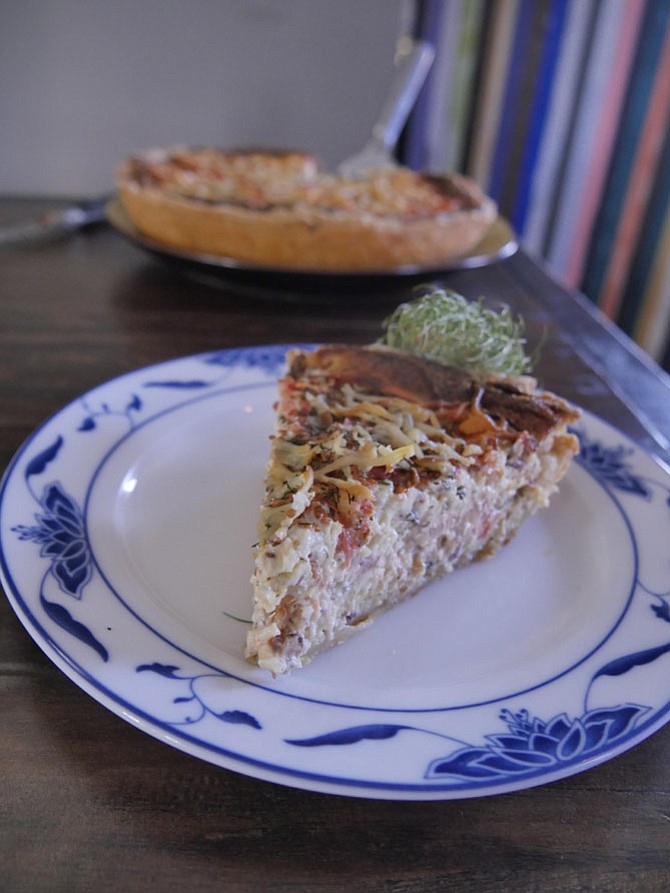 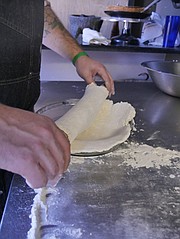 Layer half mixture in pie crust.

"Let me grab a pie dough." Chef Eric Reid is making a "quiche-like" bacon-tomato pie at Reserve at 2216 Mount Vernon Ave. He has prepared the crust and pulls it from the freezer — about 12.5 ounces of high-gluten King Arthur flour, 16 Tablespoons frozen butter, 1/3 cup ice water and 3 Tablespoons sour cream which gives it a "nice little flakiness." This makes two crusts. Reid pulls out his Escali scale. "I like to use weight measures; it is so much more accurate."

Reid liberally sprinkles flour on the counter so the crust doesn't stick. He presses down on the crust, rolling it in one direction, then another. He twirls the crust around the rolling pin and places it at the edge to unwind in the glass pie plate. "I use a glass pie plate so I can see how the crust is cooking when it has a lot of butter."

Using a small knife, Reid cuts off the extra crust around the pie plate. "I don't crimp it; I like the way it looks." He recalls this recipe came into his head when he and his dad were sitting on the deck at the lake having a bourbon and he needed a special side. "It's got our name all over it." Reid says he always tweaks a recipe until he gets it the way he likes it.

Reid pulls out a large aluminum bowl and measures two and a half cups "give or take a Tablespoon or so" of Duke's mayonnaise. "I've made this so many times I just eyeball it now." Then he breaks two large eggs into the bowl and adds a cup and a half of cooked, chopped Cherrywood bacon. "The cherrywood gives the bacon a sweeter, fruiter taste." He says the original recipe had the bacon in the crust but with all of the butter he thought it would be too greasy.

Then he takes about a cup of shredded Parmesan and a pinch of dried dill, and he mixes it well. "No need for salt because of the bacon. It's like a BLT without the lettuce. "So we're gonna do half the mixture in the pie crust."

A tray of salted, thinly sliced slightly under-ripe tomatoes sits on the side. The salt helps pull out some of the juice in the tomato slices. Reid picks up each tomato slice, one at a time and throws it hard into the pan. "This is to slap them down and get out the seeds and shake off some of the salt." He carefully places each tomato slice in an overlapping spiral on top of the mixture. He says, "The bottom layer of tomatoes doesn't have to be pretty but I like to know; it's an OCD thing."

Reid spoons the other half of the mixture on top of the spiraled tomatoes and spreads it to the edges of the crust, then arranges another layer of spiraled tomatoes. "I sprinkle more of the dried dill and about 1/4 cup of shredded Parmesan just to cover it."

"Into the oven she goes at 350 degrees for 45 minutes." Reid says this will serve eight people." He serves it at room temperature. Reid says Reserve reopened four months ago after being closed for two years. "We felt there was a void with all of the big plates where you needed a doggy bag." He would take the leftovers home and forget about them and then a few days later they would literally go to the dog. "What we have to offer is more shareable, small plates." He said they have nine items on the menu so you can bring in all of your friends and order everything.

The bacon-tomato pie is a customer favorite along with the hot chicken and the Montreal sausage. "I make the sausage myself from top butt, slice and freeze." Then into a meat grinder with chopped bacon, season with granulated onion and garlic, black pepper, sugar, crushed red chili. It goes through the sausage stuffer, then is smoked over pecan wood.

Reid said his parents always cooked. His dad was from Nebraska and his mom from Martinsville so it was fun to see different produce. When they drove back and forth, "mom and dad would always pull over and grab some stuff." His mom made sautéed yellow squash with onions and a lot of black pepper and wine "which was on our menu when I worked at Del Merei Grille” where he was for five years. He says he started out at Evening Star Cafe where he trained under the chef there.

Now onto squid ink ravioli. "This is our vegetarian dish. The squid ink adds a nice, fun color and has a slightly salty undertone." Again he eyeballs the flour and eggs and feeds the dough through the pasta machine. "They always tell me this mound of dough doesn't look like much but 1, 2, 4, 6, 8 through the machine and back on itself. It gets longer and longer. "See it stretches the whole length of the counter."