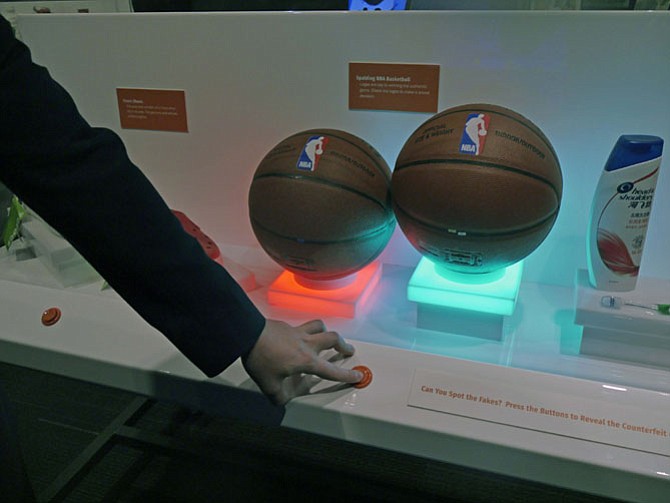 Brandon Allton stops at a display for visitors to identify the patented Spalding basketball from the nearly identical forgery. Photo by Shirley Ruhe. 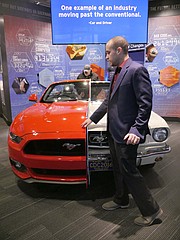 Brandon Allton, manager of the National Inventors Hall of Fame Museum, stands in front of the half of an original Ford Mustang beside a 2015 version in the museum on Dulany Street illustrating the evolution of company patent and design.

Brandon Allton, manager of the National Inventors Hall of Fame Museum, points to the wall of 550 inductees to the Wall of Fame.

Brandon Allton walks around the museum. He has been on the job for two weeks as manager of the National Inventors Hall of Fame Museum on Dulany Street. He has just come from the organization's home office in Canton, Ohio where he worked for three years.

Allton points to the inductee Wall of Fame lining one wall inside the door of the museum. Where else can you find 550 people of this caliber with Edison, Kristina Johnson and Steve Sasson who invented the digital camera on the same wall? He explains each year there are living and historical inductees with the inductees receiving a medal in a National Building Museum ceremony. "Over there is the recent class including Beatrice Hicks, Eli Harari and Howard Head."

Rmmmmmmmm echoes through the hall next to a display pairing half of an original Ford Mustang beside a 2015 Mustang. "These are two actual cars that Ford cut apart for us and shipped them here. It is one of our most popular exhibits showing how company patent and design has changed from 1965 to the present." A sign above the cars says: "Feel Free to Explore. 50 Years of Innovation. Jump In."

Allton explains that The National Inventors Hall of Fame sponsors STEM-based K-12 week-long enrichment camp programs all over the country at individual schools. The camps are taught by the local teachers to more than 130,000 students. This year's theme is "Fast Forward" with the challenge to design the house of the future using everyday materials. He says the idea is to connect with technology. "For instance, if your phone can talk to your refrigerator, it can tell me when I'm out of milk and order it from the grocery store."

A gift shop and tour desk are located inside the front door where Katy Rowe sits ready to lead tours. "You can just stop in, but if it is a large group, you should arrange it ahead of time," she said. "School groups come through all the time." A display near the desk asks: "What would your idea be to change the world?" Melody, age 10, has displayed a glittery pink shoe wired up "as an easy way to take to the air."

Allton says the museum has a partnership with the U.S. Patent and Trademark Office. "It grew out of a need to get intellectual property to kids." Each year there is a collegiate competition for the best new ideas. This year a student from the University of Iowa won the undergraduate competition by inventing a detector for stressed pigs. "It is a different pitch than the other sounds the pigs make.”

An exhibit nearby reads: "What's That Sound?" Push a button and out comes "Sweet Georgia Brown." The answer is the sound trademark for the Harlem Globetrotters." Or press the top button and out comes a sharp tweet which is the mockingjay in "The Hunger Games." He says youngsters really like the interactive displays.

Another glass case has a sign asking: “How does counterfeiting impact you and the world.” The exhibit challenges the observer to identify the patented Spalding basketball from a nearly identical fake basketball. It asks "can you tell which basketball is real?"

Allton says he graduated after studying history. He didn’t know what he wanted to do and worked in retail for a while. But he found the open position in the Canton headquarters of the museum. “I liked what they did, their mission and was lucky to get the job. I really think what we try to display here is very significant.”