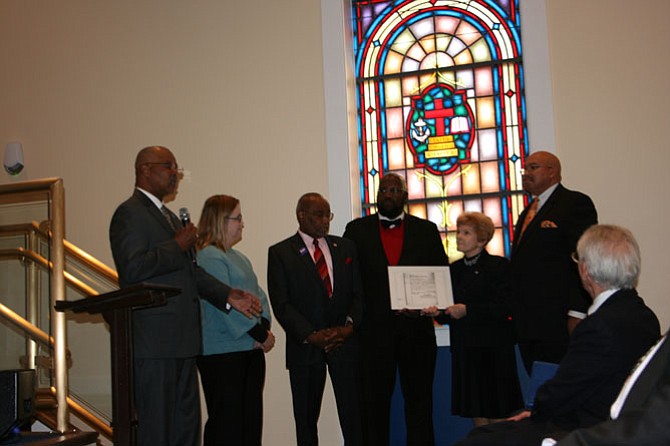 By By Rikki George

The event’s aim brings attention to both George Washington Parker and Alexandria’s African-American heritage as a whole. Written out of the history books, “Parker is a forgotten name,” said Myers. “He had a progressive mind …. Today, we’re bringing him back home.”

Parker, who died in 1873, was an active visionary during the Civil War and the post-Civil War Reconstruction period.

A mason of Universal Lodge #1 and the first documented clergyman of Third Baptist Church, Parker brokered a land acquisition of a church edifice around 1865 to accommodate a growing membership base, according to the church’s current pastor, the Rev. James V. Jordan. That site is where Third Baptist Church stands today.

An entrepreneur, Parker owned a hotel on Fayette and Payne streets and worked as assistant deputy U.S. Marshal for the U.S. Census in the Jefferson Township of Alexandria.

And, finally, as educator, Parker along with others like him taught former slaves and demanded equality along the way.

It would be approximately 100 years later before another African American, Ira L. Robinson, was elected to Alexandria’s City Council.

This is “especially meaningful for me following the footsteps” [of Parker], said Councilman John Chapman. “It [the document] will be placed in prominence to tell the story of firsts who led the city.”