Cranes and herons (top) are a common sight along Four Mile Run. One of the few pedestrian bridges (bottom) currently connects Four Mile Run Valley in the north to Shirlington village in the south. 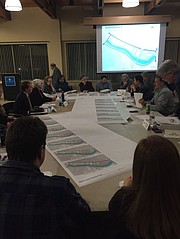 S Four Mile Run Drive is not the prettiest view in Arlington. A trip west along the southern road starts with a scenic overlook of the ART bus parking lot. From there the southern view transitions into broken down cars propped up outside garages and featureless concrete buildings.

But all of that is changing soon. The Four Mile Run Valley (4MRV) initiative, started in May 2016, aims to develop a comprehensive vision, policy, and strategy for the area’s future. A 20-person working group was established to advise county staff.

The main changes to the 4MRV will come to the park and waterfront area, which is currently unaccessible to Arlingtonians. The designs presented to the 4MRV Working Group on Jan. 18 showed possible visions for a promenade and elevated walkways that would transform the creek area into a riparian trail. The riparian, an area adjacent to the wetland, would provide a new outdoor recreational space in Arlington but comes with challenges. Currently, the water is several feet below street level. Any park space built along the banks of Four Mile Run would need to plan for flooding.

One of the biggest concerns in the local community is the future of the Shirlington Dog Park, one of the few currently existing attractions in the area. At the Jan. 18 meeting, dozens of citizens showed up to the meeting after a sign was posted at the park warning citizens that the group was going to vote on closing the dog park. They weren’t, but the show of support was noted by members of the working group. While closing the park wasn’t on the agenda, some of the proposed plans for the area could have a substantial impact on the dog park. Some of the park designs included bisecting the dog park and other natural space in the area for more street accessibility.

“We are reviewing changes to the dog park as part of the Four Mile Run Redevelopment,” said Edie Wilson, a member of the working group to the concerned dog park users. “We need you at this meeting.”

While many on the working group didn’t like the idea of roads through the natural space, Wilson also noted that the 4MRV does need more bridges and connectivity with Shirlington and Alexandria. Charles Monfort, chair of the working group, said there needed to be at least three bridges in the area that cross to Shirlingotn to make the new spaces viable and accessible.

Many of the potential redesigns for the 4MRV include park space extended into current office and business buildings. Frank McCreary, a property owner in Four Mile Run with a local business incubator, warned the group that purchasing that space could be expensive and suggested that as the group move forward, it try to find a way to work with private owners for the redesign rather than try and buy them out.

“When you start talking about taking over all of the private property in a long-term plan, are you going to put your money in that or take those buildings and do what a couple people suggested: working with the businesses to incentivize property owners and business owners,” said McCreary. “[Most will be] more than happy to work with you. Maybe there’s a tax incentive we can get. Maybe the county knows how we can get grants for building owners and property owners so we can enhance the look.”

The redesign of the 4MRV extends beyond the nature spaces. The plans include a redesign of the local streetscape, implementing a more attractive “shared use streets” model based on developments in Houston, Texas. The streets would be livened up with greenery and have the asphalt replaced with a more permeable surface to help control flooding.

Mike Katrivanos, co-founder of New District Brewing in the 4MRV, said with the new street designs that the county would need to keep parking accessibility in mind.

“Regardless of whether you’re a county employee, a property owner, a business owner or a resident, everybody needs to park here,” said Katrivanos. “We see a shortage of parking here already. As a community benefit, let’s look at parking and the location of a parking structure here.”

Roberta Talmich, a Shirlington resident attending the meeting, said the priority should be on walkability.

“We hear a lot about parking, but I would like to think about walkability,” said Talmich. “There has to be a sidewalk. Would encourage you to think a little bit further out in terms of your area so I can walk to my community theater [in Four Mile Run].”

The next meeting of the Four Mile Run Valley Working Group will be on Feb. 7 at 7 p.m. at the Park and Natural Resources Operations Building. At this meeting, the work group will be presented with a second set of diagrams for potential redesigns of the 4MRV.