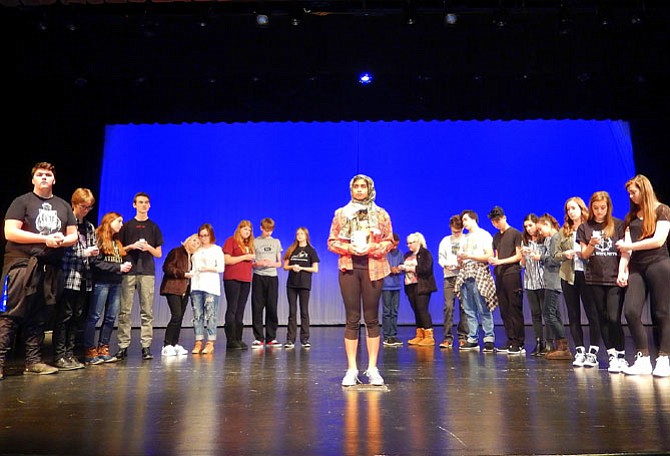 The townspeople hold a vigil for Matthew Shepard during Westfield High’s production of “The Laramie Project.” Photo by Bonnie Hobbs.

In October 1998 in a prairie outside Laramie, Wy., college student Matthew Shepard, 21, was tied to a fence and beaten because he was gay. He died five days later, and this hate crime drew worldwide attention, spurring conversations about sexual discrimination and violence.

It also led Tectonic Theater Project members and their founder Moisés Kaufman to go to Laramie and interview more than 200 residents about it. Their reactions led to the play, “The Laramie Project,” being presented next week by Westfield High.

The curtain rises Friday-Saturday, Feb. 10-11, at 7:30 p.m., and Sunday, Feb. 12, at 2 p.m. Tickets are $12 at the door, $10 for students, or $10 in advance via www.westfieldtheatreboosters.com. This play is recommended for ages 13 and older; and before the show and during intermission a silent art auction will raise funds for the Matthew Shepard Foundation.

“The Laramie Project” features a cast and crew of 30, and Director Rachel Harrington calls it “an important narrative for our time. I tell the kids that it’s looking at a specific hate crime, but we could take anyone in that situation and ask how we could spread more love and not hate.

“We’ve had a lot of open and honest conversations, and it’s opened up a dialogue for them to talk about the hard stuff. They’ve taken on a really tough show and turned it into a beautiful performance that makes me immensely proud of them.”

The play’s themes were also incorporated into the advanced theater class’s curriculum. “Because it encompasses social issues, we’ve had the chance to talk to students about them, plus history and legislation in the 1990s,” said Harrington.

In the show, each actor plays multiple characters, and Harrington said the audience will appreciate that it deals with real, modern-day people that “you’d meet in your own community and live next door to. And even through the dark, there’s light, and this play is uplifting. It handles the themes of grace, justice and love, and the kids give really awesome performances.”

The sets and costumes are minimal, because the main focus is on the story. And, said Harrington, “I hope people walk away seeing that, really, we’re all the same. We all have pain and we all love — we’re not as different as we seem.”

Senior Aubrey Cervarich plays five roles, including a local police officer’s wife. “She thinks what happened is terrible, but that Matthew shouldn’t be portrayed as a martyr or a saint. A fellow police officer was also killed recently, and she thinks his death is being overshadowed by Matthew’s. Her view is similar to today’s ‘All Lives Matter,’ and she sees all crimes as hate crimes.”

Cervarich doesn’t agree with her personally, but said, “I’ve encountered people like her who don’t understand the significance of hate crimes and making sure people aren’t persecuted for who they are. She’s lived a privileged life, so she doesn’t understand other people’s challenges.”

“It’s sadly still a very relevant topic and something that needs to be discussed, and I hope this play enlightens the audience,” continued Cervarich. “I hope it’s eye-opening to them to realize this really happened — and not long ago — and we’re in jeopardy of repeating this [tragedy] in the upcoming years.”

Among senior Charlie Parsons’s four characters is Greg Pierotti, one of the theater-company members interviewing Laramie residents. “He has a sense of humor, but is also a sensitive person, and he’s trying to get a better understanding of the way people think in Laramie,” said Parsons. “A lot of his colleagues expected the townspeople wouldn’t be receptive to their interviews. But as they stayed in the town longer — about a year — they formed personal friendships with them. Although, not all of them were welcoming.”

Since some of the theater-company members are gay, said Parsons, it makes the way they cover the aftermath of Shepard’s death much more personal for them. “I like that they all hear a variety of views from everyone in the town,” he said. “My character tries to be a welcoming presence to make the townspeople comfortable talking with him.”

Parsons finds it interesting playing multiple characters — sometimes within the same scene — because “you really have to differentiate them. The audience will appreciate how human the show is because almost all the lines are taken from what people actually said. And while it is a sad and heavy play, it has a subtext of hope and love.”

Junior Marty Bernier narrates and plays five characters, including a Laramie college student, a Baptist minister who’s against homosexuality, a friend of Matthew’s, and a 52-year-old Laramie resident who doesn’t come out as gay until a theater member interviews him. His favorite is the college student, Jedadiah Schultz.

“At first, Jedadiah thinks the incident is being blown out of proportion and doesn’t think he knows enough about homosexuality to determine whether it’s right or wrong,” said Bernier. “He was raised to believe it’s wrong, but is unsure of his own opinion. But he eventually accepts gay people, so he’s an interesting character to play because of the personal changes he goes through.”

And despite the story’s central tragedy, said Bernier, an undeniable ray of light still shines through. The message, he said, is that “love triumphs hate.”

Senior Maya Hossain’s main role is Islamic feminist Zubaida Ula. “She lives in Laramie and is passionate about feminism and educating people about Islam, which definitely reverberates with me,” said Hossain. “After the trial of Aaron McKinney, the young man who killed Shepard, she’s conflicted. Even though she supports gay rights, she went to school with McKinney and wonders how the community could put him to death. It shows that, no matter your views, you can still be sympathetic.”

“I absolutely love this part,” continued Hossain. “When I got it, I was over the moon because I’m a Muslim, too, and a feminist, and I haven’t played a character before as similar to me. What’s neat about her is that she’s also Bengali, and you don’t usually see a person represented in a show with such a specific heritage. And it’s the first time at Westfield that I’ve portrayed a Muslim character. Zubaida has important monologues, and you fall in love with her because she’s such an authentic human being.”

Noting that many other characters aren’t as hopeful as hers, Hossain said, “Those ones may be even more relatable to the audience. And when they’re juxtaposed against hope, this show feels all the more genuine; you feel grounded in these characters. The most important message is that, no matter what your beliefs are, everyone deserves human respect; everyone has a different perspective that colors their world differently from your own.”

Among senior Ruby Tippl’s four roles is Dr. Cantway, an emergency-room doctor who’s the first one to see Shepard when, clinging to life, he’s brought into the hospital. “She’s a compassionate person who cares about her patients,” said Tippl. “Twenty minutes earlier, she also treated McKinney for a broken hand. And she’s struck by how fate made one person hurt another for something inconsequential, in the bigger picture. She’s also amazed that, when she treated them, she didn’t know their connection.”

Tippl likes her character because she’s so objective and “looks on from afar at what’s happened and its effect on these two people. This is an important story and I feel lucky to be part of it. It was almost 20 years ago, and we still see reflections of the hatred that brought about this crime, today. Understanding everyone’s situation is the first step toward fixing the problem.”