Reduced condo height and unit number for seniors; townhomes with no age restriction. 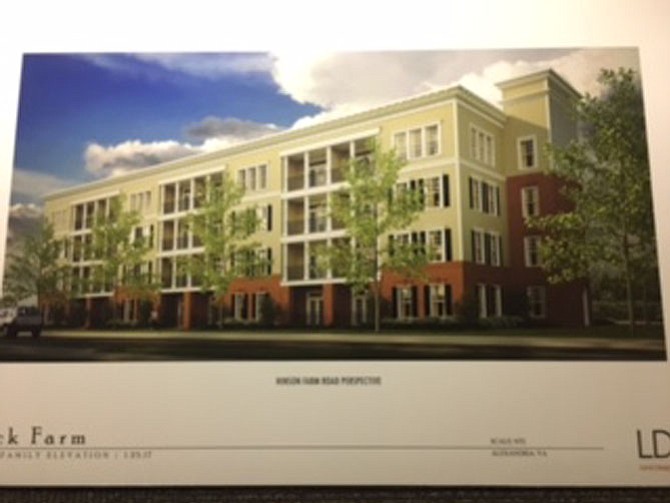 Option A for the Bock Farm site, which has already passed planning and zoning to reach the Board of Supervisors and was deferred last fall: a senior (55+) community with four, four-story buildings with 128 units at 55 ft in height, including underground structured parking.

Mount Vernon — At the end of last year, a proposal for development of more than four acres

The 55-foot height of Option A required a waiver to exceed the 50-foot limit in that zoning area.

of the land close to the Inova Mount Vernon medical office suites on Hinson, or Bock, Farm came before the Fairfax County Board of Supervisors. They voted to defer a vote until Feb. 14 of this year, with Supervisor Dan Storck (D-Mount Vernon) leading the call for more time to meet with stakeholders and facilitate community dialogue.

On Jan. 26, Storck hosted a meeting at Walt Whitman Middle School to share some of the information he’s gathered with the community.

Before the board is a proposal for a senior (55-plus) independent living community with four, four-story buildings with 128 units at 55 ft. in height, including underground structured parking.

Option B for the Bock Farm site is, again, a senior community proposal, but with lower building height (50 feet) and approximately five to 10 fewer units.

the property would add too much traffic to the area, potentially hindering response time by first responders. Others have said having the structures so close to the road and reaching a height of 55 feet would destroy the organic feeling that’s been enjoyed by the community for decades.

“This is a difficult decision that impacts not only adjacent community, but also has overall impact on the Mount Vernon community,” Storck said at the Jan. 26 meeting. “We’re not talking about just another housing development, we’re talking about an opportunity to create something that is not as available in this part of Mount Vernon district: independent living for the senior 55+ community.”

Storck’s point was accurate for the first option, “Option A,” as well as a

A third proposal, Option C, proposes 35-40 units of townhomes that aren’t age-restricted and would be around 35 feet in height, not including the peaks of the roofs.

second option for independent senior living, which developer Joe Francone explained lowered the building height to 50 feet and dropped the unit number by around five to 10 condominiums. All the condos, Francone said, would be priced between mid-$300,000s and upper $400,000s.

Option C, Francone said, would no longer be age-restrictive, but universally available townhomes, priced in the $700,000s.

With only 35 to 40 units in the Option C development, the height would again be lowered, this time to around 35 feet.

Attendees at the meeting were given note cards to provide feedback, and there was some live question-and-answer with Storck and Francone.

A survey went out after the meeting soliciting additional feedback, including a link to the full Fairfax County report on the proposed development, available online here: www.surveymonkey.com/r/TXLHCSD.