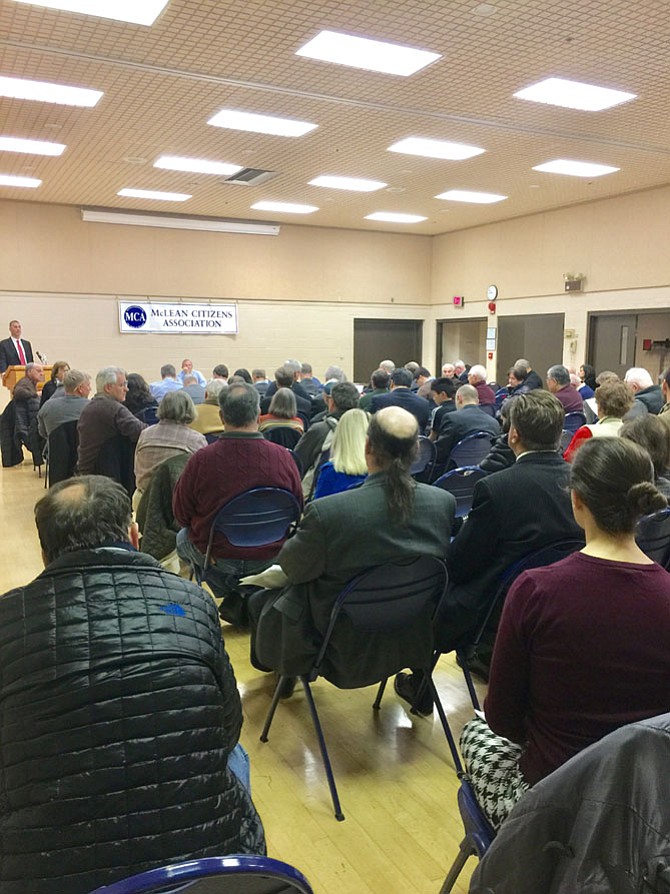 Tom Biesiadny, Fairfax County Director of Transportation, addressed a list of issues presented to him by the MCA’s Transportation Committee, and he also took questions from the audience. Photo contributed

The McLean Citizens Association (MCA) membership meeting of Jan. 26 featured Tom Biesiadny, Fairfax County Director of Transportation, who addressed a list of issues that had been presented to him by the MCA’s Transportation Committee, and he also took questions from the audience.

Biesiadny addressed issues relating to traffic on local streets by commuters seeking alternative routes to I-495 and I-66 Inside-the-Beltway. He said that studies by the Virginia Department of Transportation (VDOT) have concluded that the tolling of I-66 Inside-the-Beltway, once it begins in mid-2017, should draw traffic from local roads, not add to it, since single users would now be able to use that road if they would be willing to pay the toll.

Biesiadny discussed some locations where traffic safety is an issue and said that VDOT and Fairfax County Department of Transportation (FCDOT) are working with the Pimmit Hills Civic Association on a traffic calming plan for Griffith Road, including the installation of three speed bumps. However, the stretch of Griffith between Magarity Road and Lisle Avenue is too short to qualify for traffic calming measures.

Biesiadny addressed traffic congestion at a number of intersections involving Route 123 and Route 7 and said that FCDOT studies at 29 intersections are underway to alleviate traffic congestion at each one by 2030. The intersection of Routes 7 and 123 at Tysons is of particular interest and a number of options are being considered for inclusion in the amended comprehensive plan for Tysons, including a possible multi-level roundabout. In addition, he said that the Jones Branch Connector, to provide access across the Beltway from Tysons to Dolley Madison Blvd (Route 123), of which groundbreaking has just taken place, once completed in 2018 will help alleviate traffic at Tysons, including pedestrian and bike access across the Beltway.

In response to a perennial MCA question about possibilities for improving traffic at the American Legion Bridge, which is under the control of Maryland and is a known traffic choke point, he said that the Virginia Transportation Secretary is working with his Maryland counterpart on possible solutions. These could include express lanes and widening of the bridge and roadways in Maryland. At some point there will be an opportunity for the community to become engaged, but it is expected to be a long time before solutions are achieved.

Issues raised by the audience and addressed by Biesiadny included: dangerous traffic conditions at the intersections of Griffith and Magarity Roads, Old Georgetown Pike and Douglass Road, and Route 123 and Anderson Road; the use of speed cameras (illegal in Virginia); the nature of traffic calming programs (designed to address speed but not the volume of traffic), and efforts to work with Metro to alleviate the effects of Metro bus route cancellations. For further information about the MCA and the MCA Transportation Committee, visit the MCA Website at www.mcleancitizens.org