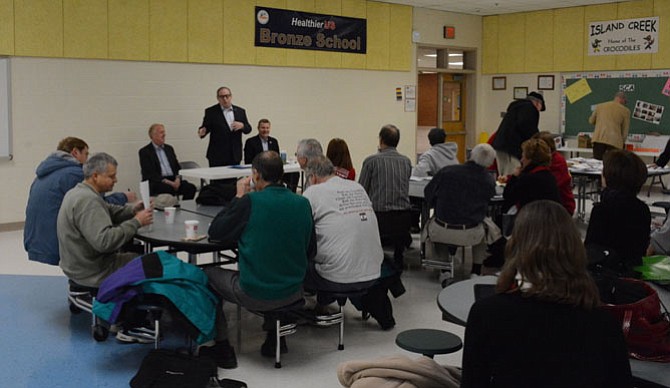 Sickles and Barker have been splitting time in their respective districts and Richmond, where the Virginia General Assembly is in session. Tuesday Feb. 7 marked “crossover,” where bills that have passed in either the House of Delegates or Senate are sent to the other body for review and voting.

Sickles used some of his time to assure the several dozen constituents in attendance that Saturday morning that despite the debt the Commonwealth is facing, “Virginia is in a great financial situation.”

The delegate added that Virginia was in no danger of losing its AAA bond rating. In addition, Sickles said, while there are other uncertainties at the federal level, President Donald Trump’s plans for increased defense spending “may not be good for debt, but are good for Virginia’s economy.”

Barker discussed work on mental health, including the extension of the Sen. Creigh Deeds (D-25) commission to study the delivery of mental health services.

“We’re making major steps forward this year,” Barker said, including getting same-day service for individuals in need. “We’re working to get this done statewide.”

McKay touched on the Fairfax County budget process. He said at the time the county was looking at a $160 million deficit, but that “we will get there,” and balance a budget like every other year.

The supervisor didn’t pass up an opportunity to mention the increase in the requested transfer for Fairfax County Public Schools from last year’s budget cycle, as well as the defeat of a so-called “Meals Tax” that would’ve lessened the budget strain by providing an estimated additional $100 million in revenue to the county.

During a question-and-answer session, Sickles fielded a question about gerrymandering, commenting that it is likely to be a big issue in the race for the next Virginia governor.

“Vote for the person who wants to take the politics out of it,” he said.

McKay took follow-up questions about the budget. He commented that the supervisors have met 40 times over the last year doing a lines of business review, and that in the last six to eight years have cut hundreds of millions of dollars from the budget.

“What we’re left with this year,” he said, “do we raise real estate tax or cut [programs and services] out of the budget?”