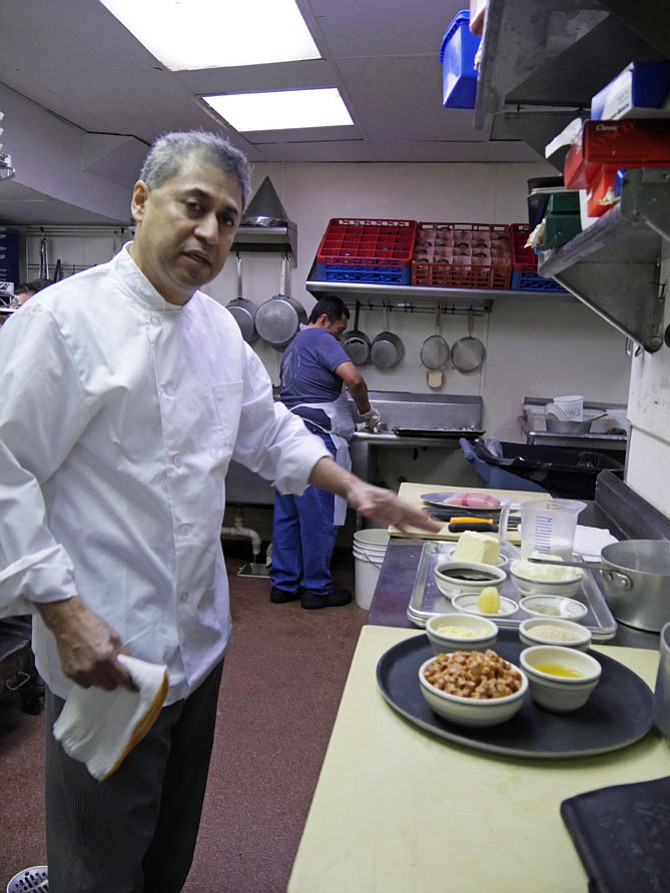 Homero Escobar, executive chef at RT’s Restaurant on Mount Vernon, has lined up his ingredients for the special of the day, “crusted mahi mahi with Creole meuniere sauce.” He will juggle three burners as he makes two sauces to combine later and the Andouille topping at the same time. Photo by Shirley Ruhe.

Pour two sauces together for reduction.

kitchen of RT’s Restaurant on Mount Vernon. “I am making the sauce and the topping at the same time for the mahi mahi,” he said.

A 20- gallon pot of veal bones with celery, onion, carrots and parsley simmers on a back burner. "We use veal stock in most of the sauces. This will cook about 6-8 hours." Today Escobar is making the daily special "crusted mahi mahi with Creole meuniere sauce." This kind of meuniere sauce is much different than the French. Today's recipe will make enough for 10 servings although usually he makes enough for 40-50 diners at one time.

Escobar drops 1/2 pound of tiny cubes of Andouille sausage into a saucepan with 1/2 cup of canola oil. "This will cook on a high burner for 3 minutes." While the Andouille is cooking, he starts working on the sauce on the adjacent burner.

unsalted butter cut into two large chunks. He will reduce the cream down a little to let it thicken. As the cream comes to a boil, he said, "You can boil heavy cream but milk will burn. A lot of people don't know that."

On the far burner Escobar prepares another part of the sauce in a separate saucepan. Later it will be added to the heavy cream. He adds one small-diced onion, 2 bay leaves, 1 small lemon peeled and a cup of Worcestershire sauce. He says he will reduce this to about 1/4 and that will take 5-10 minutes. "When Worcestershire is reduced, it becomes sweet," Escobar said. "This is real New Orleans, rich and spicy."

The mahi mahi is ready for the broiler. Escobar adds a little butter to an ovenproof oval dish and sprinkles the fish with Cajun spice. New Orleans cooking is known for its variety of spices, and this particular combination is salt and pepper, dried onion and garlic and cayenne. "The mahi mahi will sit under the broiler for 3-4 minutes and then finish off in the oven." As he watches the progress of each pan, Escobar pulls the sausage off the burner and lets it rests on the counter. He melts in two-thirds cup of grated Grana Padano Parmesan cheese and adds 1/2 cup of breadcrumbs into the sausage. "It's time to take out the mahi mahi and finish the dish."

In the meantime an order has come in for chicken gumbo. The lunch crowd has started to arrive. Escobar says that on weekdays they serve 40-50 for lunch but "on weekends it is crazy. It could be 150-170 for dinner. Nine skillets are stacked in the corner. “We use all eight burners at once."

He drains off a little of the butter in the dish with the fish and reaches for the Andouille topping which goes generously on top of the fish. "I use these julienne carrots as a garnish." Escobar opens the heavy oven door and slips the fish back in the oven at 500 degrees for another 3 minutes. It is time to add the cream to the Worcestershire combination. His assistant, Sandra Membreno, hands him the large whisk to mix the two together in the pan. The sauce will now cook for another five or so minutes to let it reduce a little.

"The last thing is the cubed potatoes. I have cut these Idaho potatoes into large cubes and deep fried them." To finish them off, he sautés them with a little canola oil for 1-2 minutes. "I will throw in a little scallion and Cajun spice." e flips the potatoes in the air to turn them over in the pan. "Now I'll arrange the potatoes in the center of the dish and top them with the mahi mahi." He places the julienned carrots on the side of the dish.

Escobar removes the sauce from the stove and strains the solids out into a bowl to discard later. "Now for the final step." He dips a two-ounce scoop into the sauce and pours the sauce artfully around the fish.

Escobar says his favorite dish at RT's is the chicken and Andouille gumbo. "The customers like the gumbo, too, and the gigantic shrimp with Jack Daniels cream. It's a signature dish at RT's and owner Ralph Davis says he can't reveal what is in it. Escobar has been at RT's since it opened in 1985. He came to America from Guatemala in 1981. "There I ate a lot of beans and corn and chicken with fresh chili peppers." He adds that he ate a lot of spicy food but not the same spices as the Cajun combination that enhances many of his dishes at RT's.

He says it was his dream to be a chef since he was a teenager. "My first job was working in a restaurant kitchen and I discovered I had a kitchen skill."