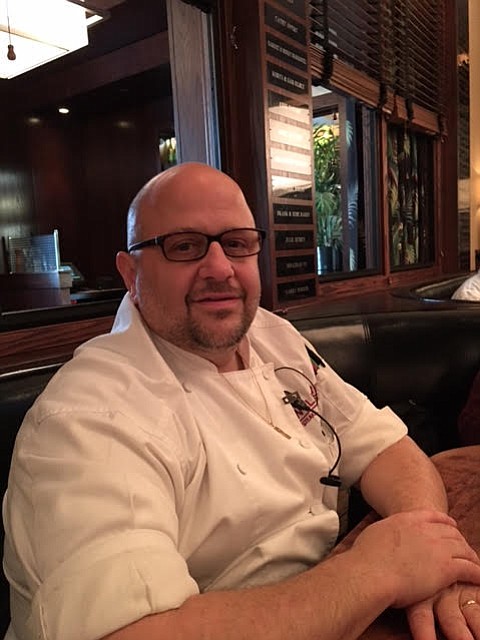 Seriously ready to tackle just about any cooking challenge or recipe calamity, Wildfire’s new sous chef Jeffrey Katz comes to this Tysons Galleria hot destination, Wildfire. Busy from lunch to the end of dinner service, this third-floor restaurant offers a robust menu of basically American standards, with a dinnertime focus on hefty beef dishes. Who could really turn down a 22-ounce prime rib cut, rubbed with garlic, salt, and coarse-ground black pepper?

Fortunately for Wildfire, Katz knows a thing or two about cooking, especially putting out high-end meals. “I have been passionate about cooking since my childhood in New York,” he said, telling how his mother and grandmother were always in the kitchen. “I wanted to be a veterinarian,” he continued. “But I watched my mother and grandmother cook traditional Jewish holiday food for Passover and other events and I was interested in that, too. I was really conflicted because I enjoyed cooking.”

To make his decision even more complicated, his family did not live near a farm, but participated in the 4-H Club. Animals such as goats, ducks, and even snakes, became part of the household. “It seemed very rural,” said Katz. “I came to respect all kinds of life. I just didn’t always want to get up at 6 a.m. to feed the chickens.”

Consequently, as a junior in high school, Katz took a vocation class in cooking. Then, in his last few years of high school, he attended a culinary vocational school. “I thought I would give it a shot,” he said, “and 30 years later, I am still doing it.”

After high school, Katz spent several years working in area kitchens to get some hands-on experience, noting that gaining that work know-how is great preparation for a future culinary career. “You have to be dedicated and really enjoy cooking,” he said. “You have to learn about team spirit with other staff members, so you will all be on the same page.”

With several years of culinary work under his belt, Katz attended the Culinary Institute of America (CIA), and in his final year, did an externship with the Kettle House Inn in Mt. Kisco, N.Y., under then-chef Mark Kaplan. For Katz, that was a real turning point, for Kaplan not only taught him how to read cookbooks and experiment in new recipes, he became and has remained Katz’s mentor. “Today, he is still my best friend,” Katz said.

In fact, Kaplan went on to open his own restaurant, the New American Bistro in Mamaroneck, N.Y., and took Katz with him. After four years, he gave Katz some invaluable yet tough advice: go out into the world and learn from other chefs, other restaurants.

That he did, and ultimately Katz has worked as executive chef and chef all over the Northeast, gaining needed experience and expertise. As a result, Katz said that he loves all kinds of cuisines, and doesn’t specialize in any one. So when a boss says to him, “Jeffrey, make this,” he takes the basic recipe, but gives it his own special twist. “I love the creativity part of my job,” he said, “and I love the camaraderie here at Wildfire.”