If pretty florals caught the eye at the Lilly Pulitzer store at Westfield Montgomery, it was was the puppies scattered throughout the prints that stole the show.

On the Saturday before Valentine’s day, they became the attraction of the moment. The puppies, who were rescued from South Carolina shelters by Potomac’s PetConnect Rescue, appeared to enjoy the attention, peering up from under volunteer’s legs, then flopping for a nap on a nearby foster person’s foot. Their presence gave those waiting to hold the pups, the opportunity to shop and adopt.

To volunteer, foster a pet or donate, go to www.petconnectres....

PetConnect’s next cat adoption event will be held on Saturday, March 4, at Potomac PetValu, from 11 a.m. to 1 p.m. 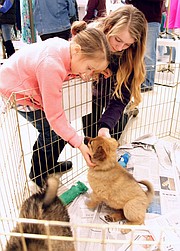 Two girls and a pup: Sisters, Simone, and Natalia Tidwell, 8 and 12, of Columbia, Md. came to shop with their mom but may go home with more than a pair of Uggs. It is not easy to pass up a few pats from, of all names “Kisses," sister to “Hugs” who turned tail for a new adventure. 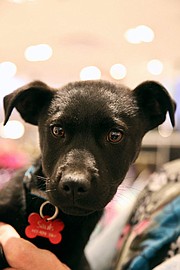 Little Roger is one of those black puppies that is often overlooked in shelters, but he caught the eye of PetConnect and is now waiting for his forever home.

This is the face that could launch a movement of another sort. Little Hugs has gone from rags to riches thanks to volunteers at PetConnect Rescue. Born in poverty with no future he is on his way to a warm and loving home on a farm where he will have miles and miles to roam before he sleeps.

Lilly Pulitzer had a lot to show off at the PetConnect adoption event. Three of the store’s managers and some very happy pups: From left are Anne Murphy holding Briana, Emily Apple with Brody and Rachel Whitlock and Bruno. 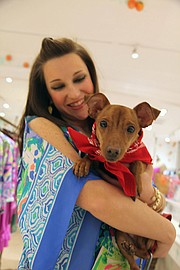 Lily Pulitzer Associate Manager Emily Apple and little Max, a Dachshund mix, spent special time together. A curious boy, he met his future family at the event and was adopted into his forever home in Chevy Chase.

PetConnect Rescue volunteer, Kelly Grinham may not be on the Today show just yet, but she had her own following of window watchers just outside the Lilly Pulitzer store. Catching passers-by eyes are the bevy of “B” pups, Brady, Brett, Briana and Bruno.

A favorite of the day, little Max, the Dachshund mix, preferred to be cuddled like the baby he is.

Lilly Pulitzer contributed 10 percent of all sales during the event to PetConnect and adoption papers were available for those who longed to take a pup home.

PetConnect rescues and adopts out approximately 700 to 800 dogs and cats a year. In addition, their outreach programs help to educate communities on the importance of spaying and neutering. According to the ASPCA, approximately 2.7 million pets are euthanized annually because shelters are too crowded and too underfunded. DoSomething.org states that only one dog born out of every 10 will find a permanent home. So, the puppies in their colorful surroundings at Lilly Pulitzer were some of the lucky ones.

Two wooly shepherd-mix pups named Hugs and Kisses needed just that after they, and a sibling that did not survive, were found abandoned in an empty house in Florence, S.C. As if they had not suffered enough, they were turned away when taken to the nearest shelter because of a lack of space. Eventually, the two pups were dropped at a local vet’s office where they huddled in a steel crate until a foster could be found.

Many abandoned puppies and other pets do not survive such an ordeal, but volunteers, who heard about their plight, offered to drive them to Potomac beginning the long trip north to PetConnect and eventual adoption.

The other litter of pups at the event, Brett, Bruno, Brody and Brianna, called the “B” pups, also arrived in Potomac on the wings of good luck because volunteers spoke up for the entire litter, including the mother, Lexie. Shelters in South Carolina are often so overwhelmed with puppies and pregnant females that workers reach out to northern rescues for relief. “PetConnect is always happy to help,” said Catherine Edwards, executive director of PetConnect Rescue, who offered to foster Hugs and Kisses and place the others.

After the event at Lilly Pulitzer, Edwards’ two foster pups, plus Max, a Dachshund mix, and Briana, one of the B pups, all found a safe and loving home, closing another chapter in the ongoing rags to riches saga that is animal rescue.

Carole Dell is a board member of PetConnect Rescue. 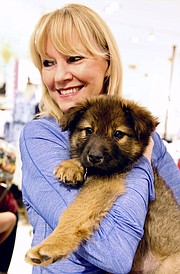 Look at the size of that paw. This pup started life in an abandoned house in South Carolina. And, where is he now? Safe in the arms of PetConnect board member Ginny Faucette of Potomac. “Hugs” will be adopted into a family with a large farm: A happy ending to a difficult beginning.

Little “Kisses” gave too many kisses and wore himself out. He found the perfect place for a nap, but does hope the owner of the shoe has nowhere else to go.

Hannah Ngo, 6, from Silver Spring and Emma Rinaudot, 3, found a couple of puppy playmates for the afternoon.

In another setting this could be a campfire gathering, just missing the marshmallows. Visitors made themselves at home with PetConnect volunteer Kelly Grinam and Max the coolest pup around. Here they chat about his possible adoption with Brock 8, friend, Olivia Girson, 10, Brock’s brother Kai, 10, and dad Joe Stanton, a wrestling coach in Chevy Chase. Max found a home.

Stopping by from their post at Vineyard Vines across the hall, Camila Soto tried to get acquainted with Brady, who was tired of being photographed. Manager Meridith Eirkson held a camera-happy Brett long enough for both to fall in love.

Two puppies are worn out from a busy day.