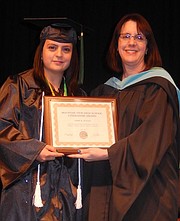 who’ve gone the extra mile to succeed, despite the difficult challenges they’ve faced. And last Wednesday, Feb. 15, the school honored four such students.

Counselor Sue Houde presented the Citizenship Award – given to those who make a difference in their school and community – to Nore Hasan. “Her story is extraordinary because she started her education in September 2010 at the age of 21,” said Houde. “She never attended school before because of a lack of opportunity in her native Iraq.”

“And now – six years, 13 semesters and 31 classes later – she’s reached her goal of high-school graduation,” continued Houde. “And she maintained a B+ average while raising her son with her husband and taking care of another family member after school.” 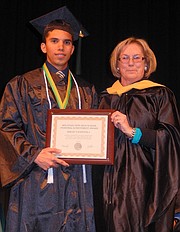 Hasan also did volunteer work in the community and made sandwiches for the homeless. And her classmates noted her persistence and courage. Houde said the Optimist Club praised Hasan’s positive attitude, and she was admitted into GMU’s Dream-Catchers program to pursue a career in nursing “so she can continue to help others.” (This program provides at-risk, obstacle-facing students with mentors and financial aid to help them graduate college).

The Personal Achievement Award, presented by counselor Ellen Fay, went to Sergio Valenzuela. It’s given to a student who succeeds at Mountain View despite having family, job or other adult commitments.

At the podium, Fay told him, “When you arrived at Mountain View in January 2012, you knew very little English and you had no car. But you said you’d walk to school, if you had to, and you kept your word. You attended school full time, worked full time and maintained a B- average.”

Keerat Gill is given the Faculty Award by newspaper and media advisor Mark Smith.

Furthermore, she said, “You not only learned a new language, but passed the reading and writing SOLs the first time you took those tests. You also received the coveted, Excellence in the English Department Award. You plan to go to college and you want to end violence in our world. I am honored to have been your counselor and am pleased to present you with this well-earned and well-deserved award.”

The Faculty Award goes to the student who achieved the greatest academic and personal success, despite significant obstacles. Two were given out this year, and the school’s newspaper and media advisor, Mark Smith, presented the first one to Keerat Gil

“She was young and immature when she first came to Mountain View, but blossomed into a capable young woman,” said Smith. “She took college-level math courses and did two summer internships. She was the student representative on the Mountain View Foundation and was editor of our school’s online newspaper, the Mountain View Mirror.”

In addition, Gill was inducted into the Quill and Scroll National Honor Society and received the Sharon DeBragga Academic Excellence Scholarship and a book scholarship. She was also admitted to GMU’s Dream-Catchers program and hopes to someday be a corporate lawyer.

Math teacher Jude Welling presented the second Faculty Award to Brandi Johnson. “When she first came to Mountain View, Brandi was having a tough time keeping her grades up and struggled with self-esteem,” said Welling. “But she got straight A’s last semester, excelled in artwork and emerged with confidence, grace and joy.”

Although Johnson is only 17, Welling said she took new students under her wing and made them feel like family. “She exemplifies our school motto of ‘Family, Love and Respect,’ and we’re proud of how she represents Mountain View.” She plans on attending NOVA to become an elementary-school teacher.