Leaders of the Pack
Votes

Leaders of the Pack 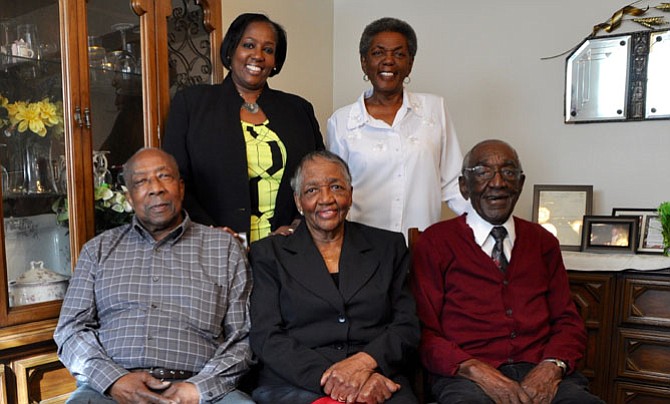 The family of 100-year-old patriarch William Charity, seated at right, will be honored March 4 at the 2017 Senior Services of Alexandria Generation to Generation Gala. Recognized with Charity will be his daughter DeeDee Marshall, sister Marjorie Burts and her husband Albert, and their daughter Kendra Gleaton. Photo contributed

Jack and John Taylor will be honored at the Senior Services of Alexandria Generation to Generation Gala March 4 at the Alexandria Mark Center Hilton.

Gant and Fran Redmon will be presented with the Community Service Award by Senior Services of Alexandria.

The proverb “charity begins at home” describes the family of 100-year-old William Charity and the decades of community service inspired by the patriarch’s example of service to others. Along with Jack Taylor and his son John, and Fran and Gant Redmon, Charity will be honored at this year’s Senior Services of Alexandria Generation to Generation Gala.

“This year’s honorees exemplify the dedication of giving back to the Alexandria community through multiple generations,” said Lynnwood Campbell, SSA’s board chair. “They serve as pillars in the community making a difference in the lives of many.”

The Generation to Generation Gala will take place March 4 at the Hilton Alexandria Mark Center. SSA will recognize the Charity and Taylor families and present a special Community Service Award to the Redmons.

William Charity, the 100-year-old patriarch of a four-generation family with deep roots in Alexandria, is a lifelong member of Ebenezer Baptist Church and served the public for 52 years as a taxi driver. His daughter, Diane (DeeDee) Marshall inherited the tradition of service to others from watching her mother and father’s work in the community. She sings in the Women’s Ecumenical Choir of the DMV and participates in local cancer walks. She is a member of the Sisters with a Purpose and Jesus Cares ministries at Ebenezer Baptist Church and volunteers with Alexandria’s Voter Registration Office.

Charity’s sister Marjorie Burts and her husband Albert grew up in Alexandria, attending historic Parker-Gray High School. Marjorie Burts is the oldest member of the Women’s Ecumenical Choir of the DMV and received a Certificate of Recognition for her support of the choir. Albert Burts served in the Korean War with the Third Infantry Division.

Their daughter, Kendra Gleaton, joins her mother and cousin in the choir and serves as the administrator of the Ebenezer Baptist Church’s Children and Youth Ministry. She also volunteers with the March of Dimes, Alexandria Cancer walk, the Salvation Army and the church’s distribution of backpacks and school supplies. She and DeeDee are both certified Red Cross Disaster Workers.

Jack Taylor came to Alexandria in 1973 when he and Frank Page acquired Alexandria Toyota. Taylor became the sole owner of the dealership in 1984 and continues to serve as president today. He has been a tireless supporter of many local charities, as well as the Michael J. Fox Foundation for Parkinson’s research. A committed supporter of the Scholarship Fund of Alexandria, Taylor has contributed more than $1.5 million through car donations, matching funds and direct contributions. He has also been an outstanding supporter of Capital Caring, raising over $1 million for the hospice organization.

John Taylor was raised in Alexandria and joined his father at Alexandria Toyota after attending Christopher Newport University. John, who became general manager in 2016, has continued his father’s tradition of giving back to the community through his support of the Scholarship Fund of Alexandria and also through his commitment to veteran’s causes.

Gant and Fran Redmon, recipients of the special Community Service award, have been residents of Alexandria for over 55 years. They met in the fourth grade and were married in 1958 after 11 years of courtship. Gant is the managing partner in the law firm of Redmon, Peyton & Braswell LLC and Fran worked as a couture fashion model before retiring and devoting her time to her work in the arts community.

Fran Redmon has also served on numerous boards and is well known for her support of the arts community. She has worked with the boards of the Alexandria Symphony, Cultural Alliance of Greater Washington, the Performing Arts Association of Alexandria, Wolf Trap Associates and the Torpedo Factory Arts Center. She was a patron for the American Showcase Theater (now Metro Stage) and Alexandria Harmonizers and participated in the selection by the Art-in-Architecture Commission of “Lady Justice” for the Alexandria Federal Courthouse.