Keep It Simple in Arlington
Votes

Keep It Simple in Arlington 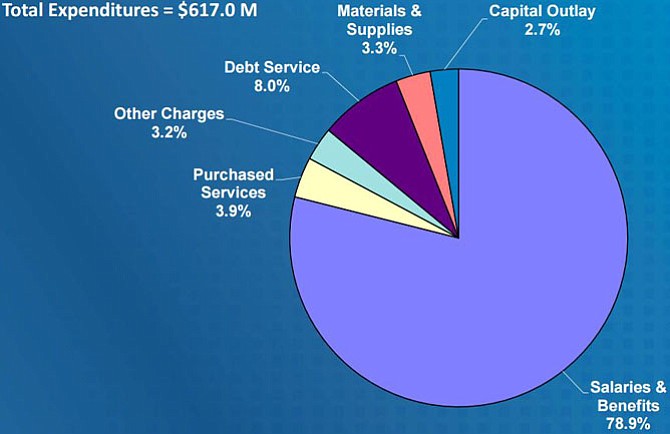 Revenue and expenditures for Arlington County in FY2018

The vacancy rate in Arlington County. County Manager Mark Schwartz said that while the vacancy rate has gone down over the last few years, he still has concerns about the office vacancy recovery over the next few budget cycles.

The proposed General Fund Budget is $1.2 billion, a 4.3 percent increase over the FY 2017 budget.

While the budget fulfills the request from WMATA for rail and service improvements, Schwartz says the one cent increase is an insufficient long-term solution for the major infrastructure work that needs to be maintained.

“Given the long term trajectory, it’s going to be challenging to do anything after this budget,” said Schwartz. “There needs to be long-term changes in funding and how [Metro] governance works. We’ll get through this year, but it doesn’t solve the underlying problems.”

County Board members and other regional leaders have called for a new dedicated revenue source, like a regional sales tax. Schwartz said he agreed there needed to be regional funding but would not endorse a specific option, adding that he believed the real challenge will be getting D.C. and the two affected states to agree to a solution.

Within Arlington, the budget calls for increased service along Columbia Pike, carrying through on commitments Schwartz says the county made last summer. However, Schwartz said many of those routes are cooperations with Metro, and the actual implementation of the new routes is still contingent on Metro developments over the next year.

“We are where we are by the Metro,” said Schwartz. “Metro will continue to work. It has to.”

The proposed budget includes $7.4 million in additional funding to APS to meet the increased needs for school enrollment — a little over half the $14 million requested by APS Superintendent Dr. Pat Murphy.

“They want the rest of the increment through tax, but on our side, we’re able to figure out how to give employee pay raises and investments,” said Schwartz. “I would like to think the schools could figure out how to as well. That doesn’t mean it will all be perfect.”

Murphy’s budget includes three tiers of cuts to close the gap. The first tier, with a savings of $2.9 million, will eliminate 23 staff positions and professional development programs. Tier two, a $3.5 million savings and 35 staff positions cut, increases class sizes by one for grades 4-12. The third tier saves $5.3 million and eliminates 20 staff positions. These cuts would postpone the step increase to halfway through the next fiscal year and increase class sizes for K-3 by one student.

Aside from the funding increases for the Metro and schools, most of the budget is a continuation of last year’s programs. What new programs exist are largely the result of internal reallocations of staff. Seven new Sheriff's Deputy positions were added from funding gained when Arlington County dropped its relationship with the Peumansend Creek Regional Jail last year. The largest new addition is five new staff for the county’s street lights program. Currently when an outage is reported it takes 30 days to fix and major repairs can take up to four months. With the new employees, Schwartz says he hopes to move that down to one or two months and the minor fixes within a couple days.

Within the existing tax rate, the funding from property value increases went to a compensation increase for county employees, including the County Board. Most employees will receive a 3.25 percent raise.

On March 28 and 20, the County Board will host a public hearing on the FY2018 budget. The budget is scheduled to be adopted April 22.