Close Encounters with History in Reston

Students meet founder of the nation 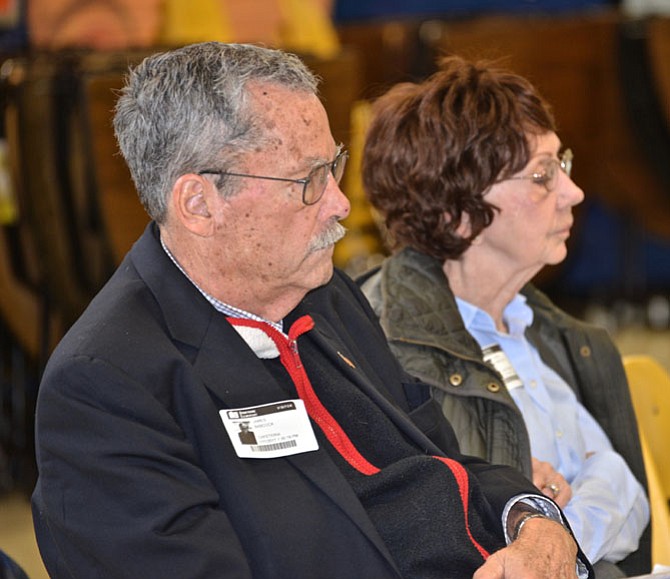 Jim and CarolAnn Babcock of Reston love history, particularly the period that gave birth to the United States of America. Retired engineers, the Babcocks felt that this look at “who we are and how we got to be the people we are today” couldn’t be emphasized enough. “In a few short years, these young people will be the voters and the hands at the helm of our country. They need to know as much as they can,” said Mrs. Babcock. Photo by Andrea Worker. 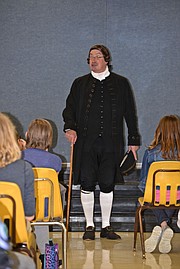 “Mr. Patrick Henry” (AKA Richard Schumann) got things started at the Armstrong Elementary School assembly by talking about the difference between English and American customs, such as the English bow versus the American handshake.

Many of the students were shocked to learn the Jefferson’s “Declaration of Independence” was frequently thrown into the gutter when it was handed out to the average “citizenry.” A bit of questioning and discussion, and they soon understood that this action wasn’t disregard for the ideas, but that most people couldn’t read. “Make good use of this amazing opportunity for education,” the Armstrong youngsters were encouraged.

“I know! I know!” Many of the students were eager to answer “Mr. Jefferson’s” (Bill Barker) questions during the living history assembly at Armstrong Elementary. That enthusiasm and excitement were repeated at all of the presentations that the two men made at schools like Buzz Aldrin ES in Reston, Brookfield ES in Chantilly, West Gate ES in Falls Church, and Hutchison ES in Herndon.

It’s a good thing that Thomas Jefferson and Patrick Henry were hardy souls, given the myriad of activities and actions and travelling and time that they both gave to the formation of “these new United States of America,” as our illustrious third President described the union the original thirteen colonies formed in 1776. It’s equally fortuitous that two of their modern day re-enactors seem to possess the same level of interest in that formation, even 241 years later, and a similar level of stamina – enough to have them bring their knowledge and enthusiasm to youngsters at eight different schools around the Fairfax County Public School (FCPS) system in just three days.

Richard Shumann (AKA Patrick Henry) and Bill Barker (otherwise known as Thomas Jefferson) brought their “always in persona” living history lesson to hour-long assemblies of elementary school students in Falls Church, McLean, Chantilly, Herndon and Reston, January 13-15, and if you had been fortunate enough to attend one of these events, you would have found their presentation and energy as fresh at the last assembly of the day as at the first. The two men interpret their characters for the Colonial Williamsburg Foundation and have been doing so for years.

There was very little “oration,” as “Mr. Henry” described his introduction at each school. Instead, the program relied primarily on engaging the audience first with the visual of their costumed appearance, and then by simply letting them loose with whatever questions they had. Apparently a sound plan. The youngsters quickly caught on and got on board. There was never one of those awkward silences. You know. “Questions anyone? Anyone?” Hands were constantly being waved by students who wanted to know more about the men who influenced the founding of our country and the times they lived in.

THE FOURTH AND SIXTH GRADERS at Armstrong Elementary in Reston seemed particularly interested in the “real” daily lives of these early Americans. There were questions about how large of a family they came from and how many children they had. The answers astonished most of the young audience. That would be nine siblings for the future President and six children in ten years with his wife Martha before her death at 33. While they were still digesting those figures, “Mr. Henry” informed them that he was the father of six children with his first wife, and eleven with his second spouse. “No way!” was the most common response to this news.

There was also a great deal of interest in the modes of transportation employed in the 1770s. There was fascination at the thought that it would take “Mr. Jefferson” about a week on horseback to make the trip from his home at Monticello to his duties in Philadelphia.

This soon led to a lively discussion about technology and the exponentially rapid changes that take place, especially in that arena. “What worries me about all this,” declared “Jefferson,” is that as we are moving so quickly, so does our past move as quickly behind us. What might that mean?” he asked. Eventually, the offered answers came to the one that was concerning the gentleman from Monticello. “Indeed,” he congratulated one young participant. “Jefferson” worries that it becomes much easier to forget our past – our history – as we move so rapidly ahead. Both presenters urged their audience to never lose sight of that history as a great tool to understanding the present, but to also focus on getting things done now, while you can.

“Jefferson” also expressed his admiration when one young man questioned him about owning slaves, prefacing his query with “I don’t mean to be rude, but…” The delegate to the Continental Congress praised the young man firstly for his “respectful demeanour and approach,” but more importantly for not being afraid to ask a difficult question about a controversial subject. One of the lessons of the day was to encourage the children to speak out about issues they see. “Don’t remain silent,” begged “Jefferson.” But do your homework and be sure to know the truth of what you speak, he added.

Several of the attendees tried to trip up the visitors with questions about IPads, ATM’s and advice to try a “Toyota Corolla” instead of a horse to get around. Both men stayed firmly in character and got these questioners to define “of which they speak” and then equated it with some aspect of life during their earlier times.

The two men also spoke strongly about civic responsibility, telling their audience that the fate of the nation would pass into their hands. “History does, indeed, repeat itself,” warned “Henry.” He insisted that to deal wisely with the present and the future required understanding of the past. “If you know your history, you will be better prepared.”

THIS OPPORTUNITY to see history come to life is made possible by the generous, personal funding of Jim and CarolAnn Babcock, both retired engineers who reside in Reston. The Babcocks have been partnering with The Colonial Williamsburg Foundation for about 8 years, each January bringing the informative and engaging program to schools in the Fairfax County system.

“We’ve always believed that understanding history in essential to understanding who we are as a country and a people,” said Mrs. Babcock. They also like that a key focus of the program is helping the students to learn to research and to seek the “primary sources,” rather than just accepting “circular reporting.” In a day and age when the phrase “fake news” is being heard so often, the Babcocks want to do whatever they can to promote education and fact-finding. Over the years, their “gift to the future” has expanded from five schools, to twenty-two. All of the schools on the 2017 tour were new recipients of the Babcock mission.

The Babcocks not only fund the program, but they personally attend the assemblies, as well. In addition, they also provide scholarships for teachers to attend a one-week educational course at Colonial Williamsburg. This summer, the Babcocks will be sending 17 teachers to the Teachers’ Institute. They are also helping to provide “Hands-on-History Kits” – one for each FCPS region - that contain items related to soldiers, slaves, and Native Americans of the Colonial times.

All of this seems like a lot of work, but CarolAnn insists that “It’s a project of love. It really keeps us going, and we are doing what’s important for the future of our country.”