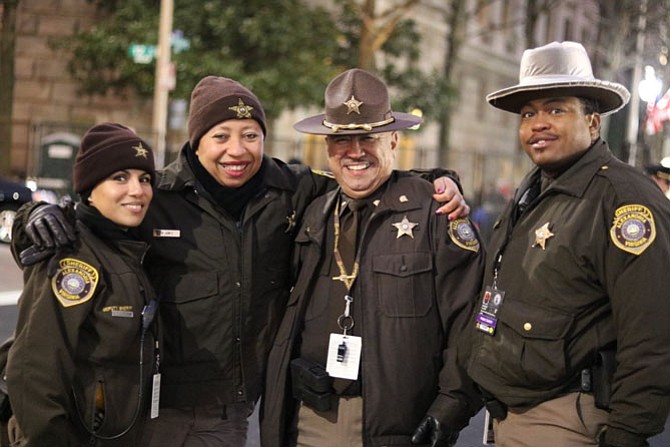 Alexandria Sheriff’s Office deputies Nora Jones, Myrna Juarez, Ernesto Arroyo and Samuel Clark gather before the start of Inauguration Day activities Jan. 20. The deputies were among 13 ASO deputies sworn in to assist with security throughout the day. Photo by Patrick Cushing

for duty during the pre-dawn hours of Jan. 20 to help provide security during Inauguration Day activities in Washington, D.C.

The local officers, including 105 from the Fairfax Police Department and 13 from the Alexandria Sheriff’s Office, were among more than 3,000 local law enforcement officials sworn in to assist with security during the inauguration of Donald Trump as 45th president of the United States.

Alexandria Police Department officers, at left, move into place on Pennsylvania Avenue during the pre-dawn hours of Jan. 20 as part of the security detail during Inauguration Day activities in Washington, D.C. Photo by Patrick Cushing

Officers began arriving in D.C. around 2:30 a.m. and worked throughout the day, ending their shift around 10 p.m. that night. Alexandria Sheriff’s Office deputies were posted in front of the Trump International Hotel on Pennsylvania Avenue with APD officers nearby.