South County graduate excels at the University of Alabama. 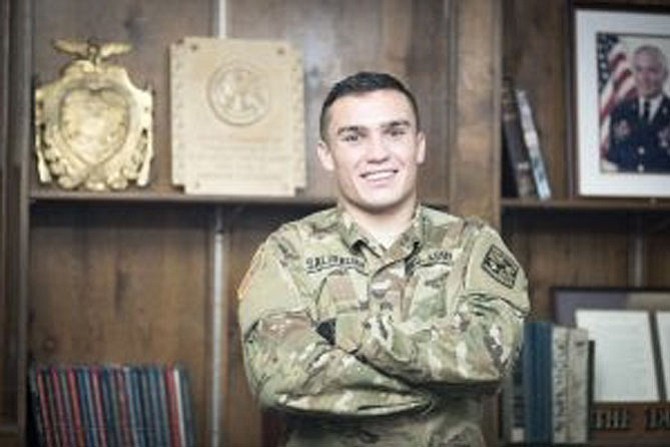 Salisbury earned an Army ROTC scholarship after his freshman year in the program.

By David Miller University of Alabama

Lorton — Conner Salisbury was destined for a career in the U.S. Navy. His father, Keith, was a Navy SEAL and continues to be the strongest influence in his life.

“My pop-pop (grandfather) was a Marine and served in Vietnam, but I got all of my military influence from my dad,” Salisbury said. “I’d always dress in military costumes for Halloween. He’d show me military landmarks, like the obstacle course at Coronado (San Diego).”

Salisbury’s father later became the strongest influence on convincing him to follow a career in the Army, specifically through the Army ROTC program at The University of Alabama.

Shortly before he graduated from South County High School in Fairfax, Virginia, Salisbury learned he wasn’t cleared medically to attend the U.S. Naval Academy. He was disappointed. It was the path his father took to becoming a SEAL; it was the path he’d always envisioned for himself.

“I was going to Key West the next day, either way, to celebrate or get over it,” Salisbury said. “I got the letter when I got home … I received a congressional nomination, but I didn’t get a medical waiver. I didn’t know what to do. I put on my running shoes and ran … four miles as fast as I could. I looked at my watch, and my time and the pace was the fastest it’s ever been.” 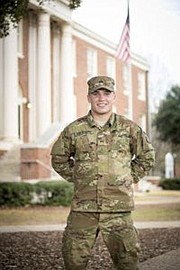 Conner Salisbury, a Fairfax, Virginia, native, has helped lead the Ranger Challenge team at The University of Alabama to the Brigade Challenge, Saturday at Camp Blanding in Starke, Florida.

Like most high school seniors, Salisbury had back-up plans. Salisbury, an all-state wrestler, had options to wrestle at small schools in Virginia. Or, he could attend UA. He and his father discussed UA while on vacation, and the family later visited the campus.

“The campus was beautiful, and of course there’s football,” Salisbury said. “I just fell in love with it.”

The military was still on his mind, but now in the back of it. Salisbury decided he’d apply for OCS once he graduated, until he learned about the Army ROTC program and the Army’s Ranger and Delta Force units, considered the Army equivalent of the Navy SEALS.

A self-described workout junkie, Salisbury was recruited by ROTC leaders to try out the Ranger Challenge team, a select group of cadets who train and compete in such Army-related events as weapons assembly, land navigation and fitness. Salisbury was sold. After serving as an alternate his freshman year, Salisbury has played a prominent role in leading the team to the 2017 Brigade Ranger Challenge, Saturday, Jan. 21, at Camp Blanding in Starke, Fa. UA’s team will face the winners from six Southeastern states and Puerto Rico. The winner of this regional will compete in an international competition at the U.S. Military Academy at West Point.

“I had no clue this competition existed when I got here,” Salisbury said. “My first year, I performed at a high level, physically; I could do more pushups and sit-ups than anyone, but tactically I was young and wasn’t up to par with them. When I heard I didn’t make the starting nine last year, it got to me. I went from being the alternate or 10th or 11th man to being one of the guys recognized for helping our team win the state competition this year.”

Salisbury helps lead the pace for the ruck march and typically scores around a 370 in the PT test. He runs a sub 12-minute clip in the two-mile run and can knock out 106 pushups. His most significant gains, have been in his focus and performance in tactical events, which are a direct result of the team’s unity, said Brandon Sinnott, cadet and team commander.

“His work ethic is superior to many, many cadets, including myself, especially in physical events,” Sinnott said. “He has highest fitness scores, consistently. He’s also matured over the year. Last year, he maybe didn’t know how he fit in, but this year, he understands where he is in the team and how to help everyone else perform at a high level.”

UA ROTC scholarship monies from the Army total more than $800,000 a year. Some ROTC cadets earn scholarships prior to enrolling; others work toward scholarships once they enroll. Salisbury, despite his high school credentials, had to meet scholarship benchmarks during his freshman year.

“I sat down and had to prove myself from Day 1,” said Salisbury, a communication major. “Some people came in with four-year scholarships, and in my class, not everyone has continued with it. Who you are on paper can only tell you so much. When I got here, I scored high on my PT test, but I wanted to make an impression. I got in class and tried to learn more and more. The classroom is where I’m weakest, but I’m hungry and I keep learning.

“Now I’m contracted to the Army, and I can’t wait to make a career out of it.”

Reprinted with permission from UA News