Supporters of the equestrian facilities show up in force to advocate that it remain horse-friendly. 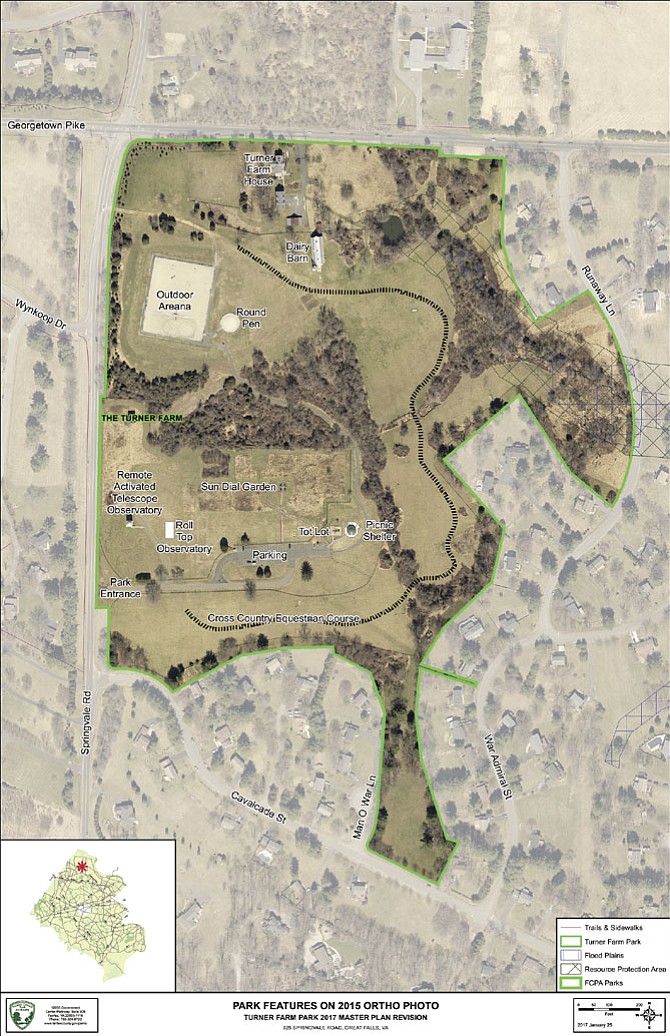 This aerial image of the layout of Turner Farm Park shows what currently exists on the site. Photo courtesy of the Fairfax County Park Authority

“I’d like for you to give priority to the equestrian aspects of Turner Farm. … There are so few places where children or adults can go to take riding lessons.” — Beverly Dickerson, Oakton resident, president of Fairfax4Horses

The master plan for the Turner Farm Park in Great Falls is being revised. The Fairfax County Park Authority hosted a public meeting on Tuesday, June 27, at the Great Falls Grange to discuss the process.

A park master plan is a document that establishes a long-range vision of a park’s uses and features by integrating detailed knowledge of its conditions with the desires of the community, according to the park authority.

One of the primary reasons for revising the park’s current master plan is because the property has expanded.

The park authority initially acquired the section of stream valley and open fields along the south and east sides of the park in 1975. The park then expanded in 1999 through the acquisition of federal government property that housed the Nike anti-aircraft missile complexes. This is when the park’s original master plan began being drafted to guide the park’s development. It was approved in July 2000.

THE PARK THEN GREW again in 2010 when property containing the Turner Farm House and its secondary buildings were acquired. These historical structures are not accounted for in the park’s original master plan.

This means the plan does not take into account the county’s Resident Curator Program, which was established as an option for public-private partnerships to provide assistance in maintaining historic houses within the county.

“The Turner Farm House is the second property announced in that program,” Tim Hackman, the Dranesville District representative to the Fairfax County Park Authority Board, said at the meeting. “There are a whole list of properties … that will be rolled out over time.”

The park has a mix of recreational facilities, including horseback riding and jumping facilities, roll-top observatory and celestial telescope facilities, playground and picnic pavilion. However, some features reflected on the existing master plan have not been constructed.

Since the original plan’s adoption seven years ago, the park authority is seeking feedback on whether the resources that have not been built should stay or go:

“Just because we’re asking, it’s not a guarantee or an interest of us to change everything,” Gayle Hooper, a spokesperson for the park authority said during the meeting. “We started this because we acquired the new properties up where the farmhouse is that needs to be worked into the plan so that the Resident Curator Program can move forward with its process. But as we do it, it’s a great opportunity to come back and check the pulse of the community; find out how well the park is serving everybody.”

Supporters of the equestrian facilities showed up in force at the meeting to advocate that it remains a horse-friendly park.

The equestrians in the room were mostly in agreement for the park authority to ditch the running, jogging and croquet court that had not been built and focusing on horses and riding facilities.

“I’d like for you to give priority to the equestrian aspects of Turner Farm,” said Beverly Dickerson, an Oakton resident who is president of Fairfax4Horses. “There are so few places where children or adults can go to take riding lessons.”

“I really wouldn’t put horses on the backburner,” Ursula Moore of Fairfax, who is an American Riding Instructors Association certified riding trainer, added. “I think we can all work together … this is very usable and very shareable piece of property.”

Loud applause broke out after therapeutic riding was encouraged to remain at the park.

“We as a board want to express our desire to keep it as an equestrian use primarily and especially to keep a portion of it for the ability of Lift Me Up to use,” Bill Carbaugh, president of the board of Lift Me Up!, a therapeutic horseback riding program in Great Falls which uses the park to provide its services to children and adults who have physical, mental and emotional disabilities.

The Lift Me Up! program has been offered at the park since the original master plan was adopted in 2000.

THE EQUESTRIANS also stood up for the stargazers in the room from the Analemma Society, which has a partnership agreement with the park authority to develop recreational and educational astronomy programs at the roll-top observatory at the park.

“It should remain an equestrian facility, primarily, with the exception of the piece that the Analemma Society, which is a completely separate use,” said Karen Washburn, a member of Turner Farm Events, which fundraises to maintain the equestrian uses in the park. “But we don’t tread on each other’s toes, it works out, very, very well.”

The Analemma Society also spoke up during the meeting.

“The observatories are very important to the community,” Analemma Society Secretary Jacqueline Olin said. “Many people are enjoying Friday nights when they are open to the public for viewing and for the classes that are being given.”

Olin also put in a good word for the equestrians.

“Since 2000, the Analemma Society has been developing observatory activity at the park and the equestrians have been developing theirs — except for a few occasions where we had to learn how to handle our horse dropping, which we’ve done beautifully,” she said. “It’s been a great experience.”

These county residents made it known that they put their own money into the development of the unique equine and observatory resources that can be found at the park.

“The things that got built on this master plan all had to have a constituency … a lot of money was raised, a lot of effort,” a woman from Reston said from the back of the room.

The public information meeting last week was just the beginning of the master planning process.

Comments about the park and the master plan may be submitted to the park authority by emailing parkmail@fairfaxcounty.gov.