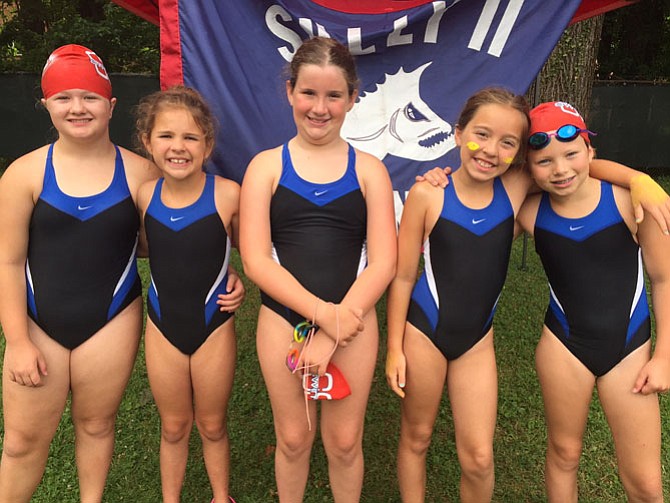 Featuring fingertip finishes and consistent cheers, the Sully Station II Piranhas put forth a fierce effort in the meet against Annandale on July 1. Ultimately falling 223-187, the team never wavered in giving their all and supporting for each other.

Leading the way once again were 12-year old phenoms Caroline Li and Angela Cai, who combined to capture all events in their age group. Together with Samantha Lacy and Callie Ver Planck, the girls dominated the medley relay with an almost 5 second win. Fourteen-year old Faith Alston was also a double event winner with blistering swims in freestyle and breaststroke.

Demonstrating true leadership, 16-year old Kellen Campbell brought home two victories in back and fly and was a key member of two relay teams. He combined with Colin Brown, Max Morris and brother Brody Campbell to easily outpace Annandale with an almost 6 second victory in the 15-18 boys medley. Kellen also anchored the mixed age relay and along with Simon Campbell, Emerson Saint Germain and Harrison Saint Germain the boys turned in a race that just fell short by .04 seconds.

Claiming victories by mere fractions of a second were Max Morris in freestyle by .04, Karenna Hall in backstroke by .05 and Grace Ver Planck in butterfly by .04 seconds. These individual performances were followed up by sensational relay events, including wins by 8&U girls Mary Campbell, Grace Ver Planck, Alyssa Seng and Payton Susko and mixed age girls Angela Cai, Ehma Stalfort, Faith Alston and Karenna Hall.

The 8&U boys completed a comeback with 6-year old anchor Michael Zhang bringing home the win with teammates Gabriel Alquinta, Mark McLendon, and Zacchaeus Post. Similarly, the 15-18 girls squad of Carly Logan, Georgia Stamper, Delaney Kennedy, and Karenna Hall gave a tremendous effort to out touch their opponents by .02 seconds.

The team would like to give special recognition to 11-year olds Samantha Lacy, Audrey Sevilla, and Cecilia Alquinta who all swam up an age group to help Sully II round out the 13-14 freestyle, backstroke and medley relay.

The Piranhas will travel to Laurel Hill in Lorton for their next A meet on Saturday, July 7.