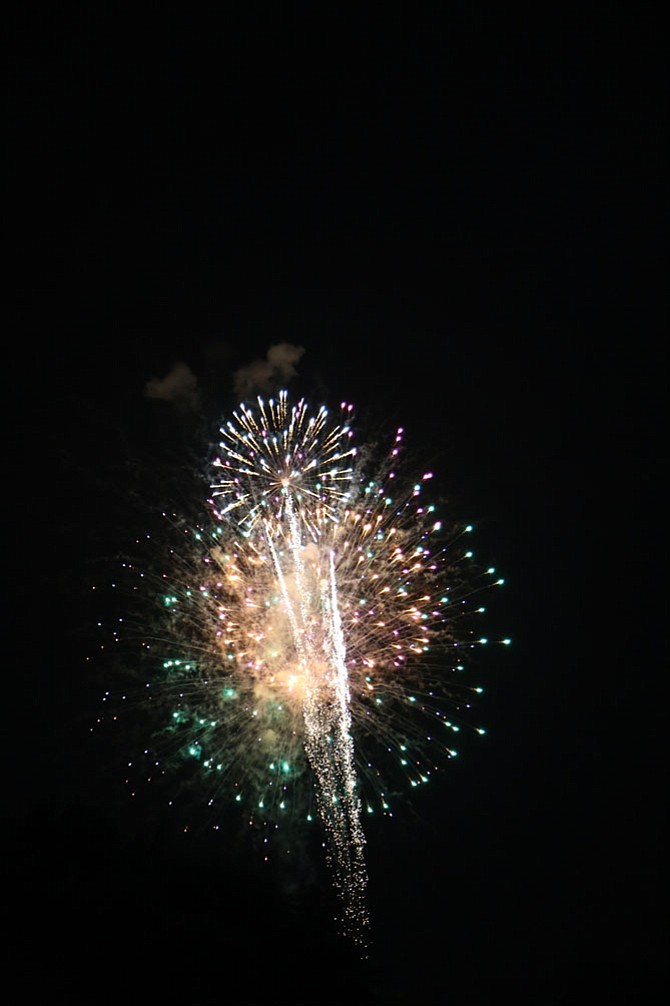 The fireworks display lasted for 20 minutes. Photo by Fallon Forbush. 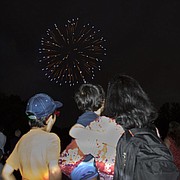 Bala Deepa Balasubrahmanyan of McLean (right), who was born in India, and her sons Pranav, 11, and Krishiv, 2, watch the fireworks display as they are set off.

Retired Army Veteran Bob Molepske, commander of the McLean Post 270 of the American Legion, gave out 500 American flags to those who attended the celebration.

Damien Saab, 10, of McLean catches a flying disk in the Churchill Road Park while the DJ plays music before the fireworks show.

Christel Saab of McLean throws a flying disk to her son Damien, 10, in the Churchill Road Park while the DJ plays music before the fireworks show. 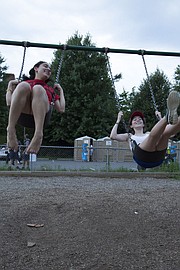 Lia Chandra, 15, of McLean (left) swings with her friend and McLean High School classmate Lily Cooper, 16 (right), on the playground before the fireworks show.

A total of 1,348 shells burst in the 20-minute fireworks show in McLean on Independence Day. The spectacle, “McLean’s 2017 Independence Day Celebration” was put on by the McLean Community Center at the Churchill Road Elementary School.

"Not including neighbors who could view the blasts from their own homes, more than 3,000 people were estimated to have watched the display from the school by walking to the site or by taking school buses that were provided to shuttle passengers from St. John’s Episcopal Church and St. Luke’s Catholic Church on Georgetown Pike and the McLean Baptist Church on Chain Bridge Road."

Before dark, children played on the school’s playground and families lounged on the grass while listening to music played by a DJ. People also took advantage of the Churchill Road Park that adjoins the school property by throwing flying discs and playing ball.

Food trucks were also on site for those who worked up an appetite, including:

The MCC budgeted $62,000 for the event to pay for security, rental equipment, school property rental, transportation and of course the fireworks, which were done by East Coast Pyrotechnics, according to Catherine Nesbitt, the MCC’s special events manager.

“Due to the expense of the fireworks, we always put in a rain date for the following day in case we are unable to shoot the night of July 4,” she said.

Though bursts of rain showers poured over the county in the early evening, the weather cleared up in time for the show to go on as scheduled.

The annual fireworks show, which are usually launched from property at Langley High School, were set off from the Cooper Middle School, since the high school is undergoing renovation work.

“Until we can look at returning to Langley High School for this event, the Cooper Middle School site remains the only suitable shooting site in McLean with the proper safety distances approved by the Fire Marshall,” Nesbitt said.

Laurelie Wallace, chair of the MCC Governing Board, took time from her speech before the fireworks went off to address the community center’s own 18-month renovation, which began in March.

“As many of you know, the McLean Community Center is currently being renovated at the Ingleside [Avenue] location,” Wallace said. “Just a brief update to let you know that the project is currently underway, on budget and on time,” she added.

Wallace then led the crowd in the Pledge of Allegiance and introduced the playing of a recording of the Star-Spangled Banner by Whitney Houston, which was recorded when she sang the national anthem to kick off the Super Bowl in Tampa, Florida, on Jan. 17, 1991.