History: Have Gun and Pencil, Will Cover War
Votes

History: Have Gun and Pencil, Will Cover War 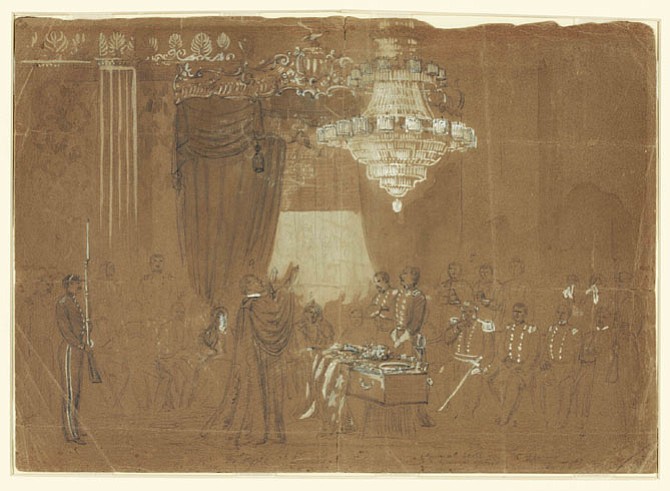 Waud captured this view of the Alexandria waterfront, likely in June 1861, while standing on the Maryland shore. USS Pawnee, a steam sloop-of-war, is on station at the far right as she kept Alexandria's wharves and piers under threat of her guns. Pencil and Chinese white on olive paper.

Waud sketched the soldiers of the 71st New York Infantry as they waited near Washington Street for their camp equipage to arrive by wagon in late May 1861. The Mount Vernon Cotton Factory is visible in the background. Pencil and Chinese white on brown paper.

Timothy O’Sullivan photographed Waud on the Gettysburg battlefield in early July 1863. The artist posed on a rock formation in the Devil’s Den area of the battleground, and his revolver holster is evident on his left hip.

If indeed the pen is mightier than the sword, there was a time in American warfare history when the pencil also was a robust instrument. That was during the Civil War, when sketch artists traveled with military units on both sides to capture the deadly movement of men and horses that the rudimentary cameras of the era could not achieve. It was dangerous work, and one of these men, Theodore Davis, described the fundamental characteristic of a war artist: “Total disregard for personal safety.”

Englishman Alfred Waud (pronounced Wode) was the most prolific of what the New York newspapers called “special artists,” or “specials,” during the war. Soon after Confederate forces attacked Fort Sumter in South Carolina on April 12, 1861, three prominent illustrated newspapers in New York – Harper’s Weekly, Frank Leslie’s Illustrated Newspaper and the New York Illustrated News – sent specials to Washington DC. Waud initially made field sketches for the Illustrated News, but shifted to Harper’s in early 1862. Throughout, he used pen, pencil and charcoal, plus a zinc-oxide pigment called “Chinese white” to add highlights.

Waud arrived in Washington in early May as Union military units began staging there in anticipation of Virginia formally joining other Southern states that had seceded. Virginians voted to join the Confederacy on May 23, and the following day, the Union Army seized control of Alexandria.

The 11th New York Fire Zouaves regiment was part of the occupying force, and its commander, Col. Elmer Ellsworth, was a friend of President Abraham Lincoln. The commander-in-chief, according to the National Park Service website, previously had seen from the District a large secessionist flag flying from an Alexandria rooftop and ordered Ellsworth to remove it.

Ellsworth and several soldiers found the flag atop the Marshall House, an inn located on the current site of Hotel Monaco at King and Pitt. They climbed to the building’s roof, removed the large flag and began descending the staircase. The innkeeper, James Jackson, confronted them and with a shotgun killed Ellsworth, the first notable Union casualty of the war. A soldier with Ellsworth, Pvt. Francis Brownell, then shot and killed Jackson. Brownell soon earned an officer’s commission, and, after war, was awarded the Congressional Medal of Honor for his actions at the Marshall House.

Lincoln arranged for Ellsworth’s funeral to be at the White House, and Waud captured the scene with a sketch. Following a routine he used throughout the war, he sent the drawing to New York. There, Illustrated News artists turned Waud’s art into first a wood-block engraving and then an electroplate used by the printing presses. Usually three to four weeks elapsed between Waud’s sketching and printing in New York.

In late May and June 1861, Waud sketched several scenes in Alexandria, including the encampment of the 71st New York Infantry near the Mount Vernon Cotton Factory at 515 North Washington, now The Mill, an apartment building. He also sketched the Alexandria waterfront as seen from the Maryland shore of the Potomac.

Waud covered the first Battle of Bull Run (or Manassas) on July 21, and, upon returning to Alexandria with the defeated and largely panicked Union forces, showed his mettle in a tight spot. When a Union soldier tried to steal his mount, according to Waud biographer, Frederic Ray, the plucky Waud drew his revolver and forced the man to retreat. Later, in a story in the Illustrated News, Waud wrote of his next step, “I rode off devilish quick.”

Davis and Waud created drawings of the hostilities until the war’s end, the only two specials to do so without a respite. Many other specials joined the two men, some of whom later moved on to greater artistic endeavors — Winslow Homer and political cartoonist Thomas Nast, for example.

Waud continued to illustrate Harper publications until his 1891 death.