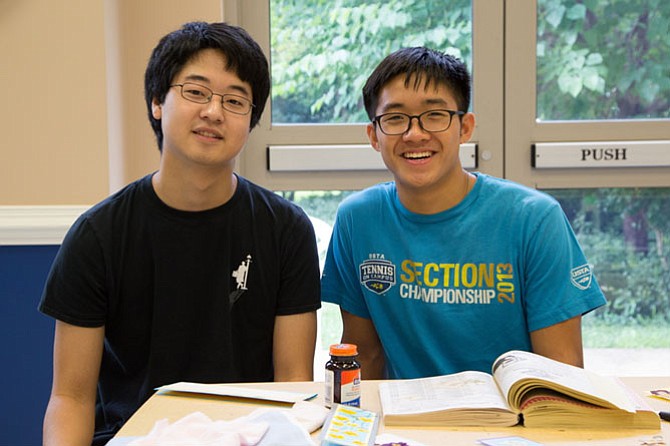 Bradley Kim, 17, and Daniel Tran, 18, of McLean High School are helping out with the week-long camp this summer. They used to play in the orchestra at the Summer Strings Camp when they were kids. Photo by Colin Stoecker/The Connection

Maggie Mosby and Maya Pashai, rising sixth graders, pose for a picture during a break in Wacky Wednesday at the Summer Strings Camp.

Students in an orchestra at Summer Strings Camp learn how to read sheet music while dressed up in costumes for Wacky Wednesday.

Ruth Donahue is the orchestral leader, and supervisor of the children enrolled in this summer session of Summer Strings Camp. She has also been the Orchestra Director at Spring Hill Elementary School in McLean for 30 years.

“I have played with the Oklahoma Symphony Orchestra, and the Cincinnati Ballet Orchestra. But enough about me,” she said.

When she was 9 years old, she used to play flute but because she was tall, her teachers suggested the cello. “My mom encouraged me to try it and I’m grateful that it was the cello,” she said.

Donahue started these camps in Oklahoma. “I can see the difference in the kids who did the summer camp because their level of playing goes up and they’re more prepared in the fall,” she said.

Kavya Srikumar, 10, a fifth grader at Spring Hill Elementary school is one of these students. “Her teacher is Ms. D and there’s a great music program. She doesn’t want to do regular violin, but just explore and we can take it further if she chooses,” said her mother Ekta Srikumar, 43, a doctor.

In the orchestra this summer there are mostly violin players, viola and cello. “We don’t have any bass players,” said Donahue.

According to Donahue, Wacky Wednesday, Messy Monday, and kickball helps to keep it interesting during the program. “It’s because I give them so much music,” she said.

Bradley Kim, 17, and Daniel Tran, 18, of McLean High School are helping out with the week-long camp this summer. They used to play in the orchestra at the Summer Strings Camp when they were younger.

The camp is sponsored by Music Masters, a local music store in Vienna.

This year’s Summer Strings Camp ran July 5-13. It culminated in an orchestral performance held this past Thursday at St. Thomas Episcopal Church. “Each student gets a medal for participation,” said Donahue.