Piece of Cake in Alexandria
Votes

Piece of Cake in Alexandria 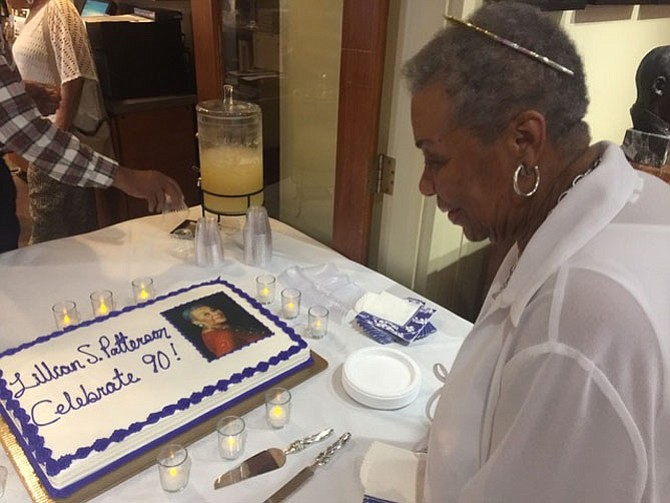 Lillian Patterson, a fourth generation Alexandrian, celebrated her 90th birthday June 22 at a surprise party held in her honor at the Black History Museum. Photo by Memories of Bliss Photography

Photo by Memories of Bliss Photography

Lillian Patterson, a fourth-generation Alexandrian whose first ancestor was brought to America as a slave in 1779, celebrated her 90th birthday June 22 at a surprise party held in her honor at the Alexandria Black History Museum.

More than 70 well-wishers from across the city joined in the celebration for the 2012 Living Legend of Alexandria, including Patterson’s daughters Marilyn Patterson and Valerie Patterson Connors; grandsons Marques Wilson, Charles Connors and Alexander Connors; and great-grandson Jeremiah Wilson.

Patterson is the eldest of seven children born to Rev. N. Howard Stanton, then a pastor at Ebenezer Baptist Church, and Esther Gray Stanton, who was a teacher. She graduated from the segregated Parker-Gray High School in 1944 and received a BA in social studies from Storer College in Harpers Ferry, W.Va., in 1950.

In 1956, Patterson married Edward Lloyd Patterson, a music teacher and assistant principal of Parker-Gray High School. They were married for 23 years before his death in 1979.

In addition, she has served as historian for Shiloh Baptist Church and twice as president of the Seminary Civic Association. She stays active in projects at the Black History Museum and is frequently seen assisting her daughter Marilyn, founder of the event planning company Joyous Events.

“Mom was quite surprised,” said Marilyn Patterson. “It was a wonderful evening.”