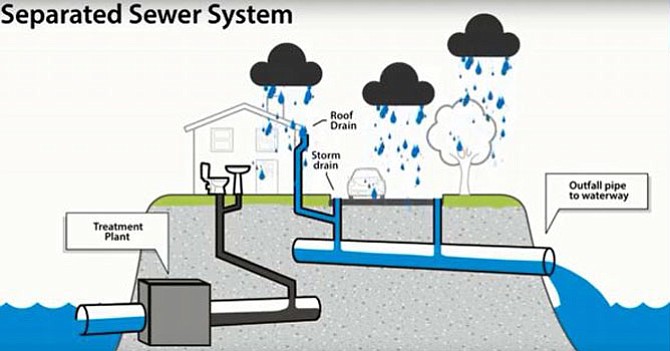 Alexandria — Between 70 to 100 feet below the surface, one of the largest infrastructure projects in the city’s history is in the works. Residents might not notice the physical impact of the city’s plan to replace its combined sewer system, but at a meeting on May 30 at the Lee Center, officials warned that they will most likely notice the impact on their wallets.

“Here’s the sticker shock: the cost is going to be in the order of $300 to $400 million,” said William Skrabak, deputy director of Infrastructure and Environmental Quality. “The community will see those costs rise as a result of recent legislation. Originally there was going to be a $10 to $15 cost increase per month … now we’re looking at $25 or $30, maybe $35 a the upper end. This is very early preliminary cost estimates. Those numbers will be shifting as we go through the process.”

How much of that increase comes from the city side of the water bill and how much comes from the AlexRenew, Alexandria’s wastewater treatment facility, is still to be determined.

As part of a mandate to reduce the city’s pollution into Hunting Creek, city government was in the process of developing a plan to deal with some of the sewer outfalls that dumped directly into that smaller body of water. However, the city’s plans to deal with the largest outfall, 001, were less clear. The state legislature stepped in and set a more clear deadline: the entire combined sewage system must be replaced by 2025.

Now, the city is working to develop plans on how to simultaneously address all four outfalls at once. The plan for Outfalls 003 and 004 along Duke Street are clear: the city will build a 10-foot diameter tunnel between the outfalls and the AlexRenew treatment facility. The tunnel will be larger than what is required by the state and will store 1.6 million gallons of overflow. The only impact Skrabak said the state legislation had on the Outfall 003 and 004 was accelerating them by six months.

The larger problem for the city is how to deal with Outfalls 001 and 002. Currently, Skrabak said there are three potential plans for addressing sewage overflow at 001 and 002: each site has a separate storage tank roughly the size of a football field, one side has a tank and the other has a tunnel connecting their sewage line to the other’s tank, or both sides share a large tunnel where the water is stored and treated. Over the summer, Skrabak said city staff will be considering the size of the projects, the cost, and the construction impacts to form a recommendation. Plans for Outfalls 001 and 002 will be submitted by June 1, 2018. Construction on each of the projects needs to be started by July 1, 2024 to be completed by July 1, 2025.

State Sen. Adam Ebbin and Del. Mark Levine cautioned that it was unlikely the city was going to be able to complete the project by the deadline. However, Levine noted that the legislation as passed had included no repercussions for the city if it failed to meet that deadline.

Some Alexandrians were concerned about the vagueness and the timing of information related to sewer bills for the average citizens. Patricia Sanders from the Nethergate Community Association said some of the neighborhoods in the city don’t have individual water meters, the communities are billed collectively. Sanders said sewage fees are the largest part of her community’s budget, and that the association needs to know about the exact costs to be able to plan accordingly for them.

Dean Naujoks from the Potomac Riverkeeper Network, warned the city to keep the process very transparent and open to the public. Naujoks said the plans for dealing with the outfalls last year were mostly being discussed behind closed doors, which is part of what prompted the public outrage about information about how much Outfall 001 had been polluting. Now, looking at the new proposals, Naujoks said he can already see problems forming in the new process.

“We have concerns about this already,” said Naujoks, “but we were cut out of this process, and this is why we are here today.”

Levine responded that if the process was rushed and there was a lack of public input, it was the fault of organizations like the Potomac Riverkeeper Network who pushed for tighter deadlines.

“Don’t complain that there’s not enough time for comment when you’re pressing us to get it done by a certain date,” said Levine.

Skrabak said the Combined Sewer System Plan Stakeholder Group will be reconvened in the fall of 2017 to provide input on the plans to address the sewer outfalls. All Stakeholder Group meetings are open to the public for input and comment.