A return to the Tuna, Texas franchise where actors play multiple comedic roles. 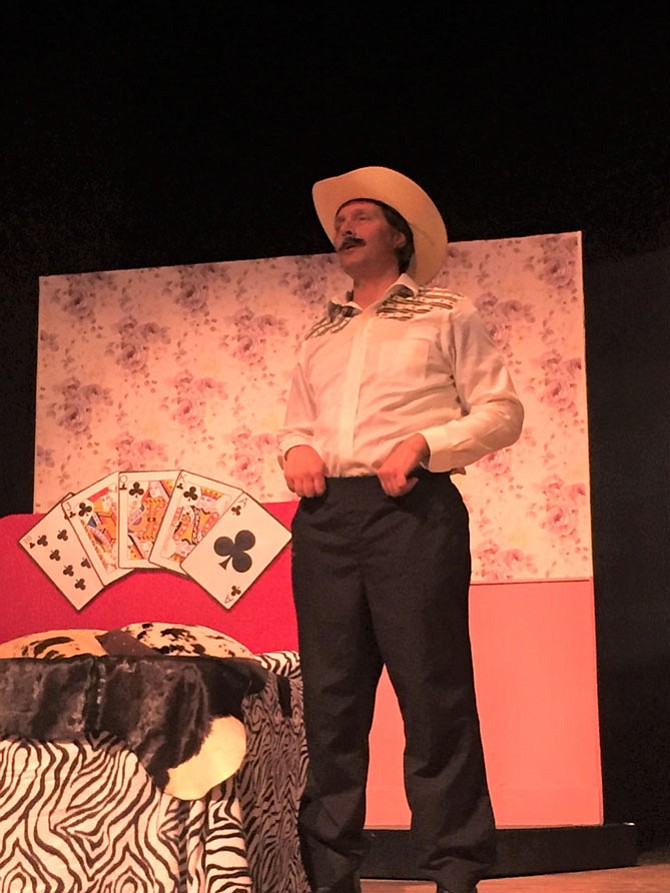 Stephen McDonnell rehearses the part of Arles, one of about 10 characters he plays in LTA's production of "Red, White, and Tuna," now through June 24, 2017. Photo contributed 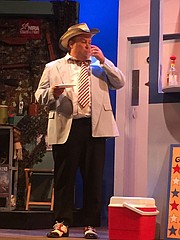 Dave Wright plays the role of the Mayor in LTA's production of "Red, White, and Tuna."

In the hilarious comedy, "Red, White, and Tuna," the Little Theatre of Alexandria (LTA) returns to Tuna, Texas, the state's third smallest town, where the Lion's Club is too liberal, Patsy Cline never dies, and the residents never stop listening to the OKKK radio station. In this third installment of LTA's 2009 production of "Greater Tuna," two actors again create the population of Tuna, including a few hippies who have returned to their roots for their high school reunion. The show runs from June 3 to June 24, 2017.

Stephen McDonnell plays the role of Actor 2, whose many characters range from an aging vegan hippie, to a macho Texan radio man, to a mild-mannered animal lover, to the first lady of Tuna society (with an overdeveloped sense of what constitutes right and wrong). There's also a woman who lives to "shoot first and ask questions later," he said. "Each one is recognizable and outrageous ... perhaps that's what makes them all funny."

McDonnell used to act in New York City, but his real love was stand up comedy and improv. "Rediscovering all the little tricks that actors develop to learn their parts has been both a challenge and a joy," he said, adding that memorizing the line load was daunting. "Also, I have never had a role with so many costume changes, so many wigs, so many characters. Keeping them straight is an added challenge."

He said he wants people to laugh, of course, after all it is a comedy. "But I also want audience members to leave knowing that these people exist throughout the country. It's fun to laugh at these folks, but they are recognizable and deserve, in some way, respect," he said.

Dave Wright is playing the role of Actor 1, which is actually 10 different characters. "I like them all, but I am particularly fond of Bertha Bumiller, the aging bride-to-be," he said. "We all know someone like her. She has a sharp wit, insecurities, a strong moral core, complexity, and a willingness to learn, which we discover in the end. I also like the way her wig looks on me."

He said he is always looking for good character roles, and this show has given him several. "The challenge is developing 10 distinct characters with 10 distinct voices, and 10 distinct motivations, and then having each of those characters ready to appear instantly," he said. "Moving so quickly from one character to another is exciting, and it demands every trick I've ever learned on the stage over the years. The one thing that was not a challenge was working with Steve and Mike Baker to develop the characters. That part was a pleasure."

Co-producer Marian Holmes, who visited Tuna, Texas, as the producer for LTA's “Greater Tuna” once before, couldn't resist visiting again. "I relish the excitement of the fast changes for the actors backstage; it was an indelible theater experience," she said. "But one of the charms of live theater is that you never actually replicate an experience — even from performance to performance within a run, but the palpable sense of fun which surrounds all the 'Tuna' shows is quite narcotic."

She added, "Our hope is first of all to entertain. We want to hear the audience giggle and guffaw as they meet the array of Tuna residents — with all their foibles. However, there are tender moments and warm relationships between the characters which we hope they will remember and carry away with them when they leave the theater."

Co-Producer Russell Wyland, who has produced almost 20 LTA productions, said he decided to produce because he loves the Tuna, Texas, franchise with Joe Sears and Jaston Williams. "But I come from a small town — Wisconsin, not Texas — and the kinds of small town characters are almost like comfort food to me. I laugh at them, but only because I recognize they are a part of me as someone raised in that kind of place. It also helps that I married a Texan, and jokes about SMU, Oklahoma, and Aggies make sense to me."

He added, "It would be difficult, I think, for audience members to leave the theater without amazement that this show — with its jokes about liberals, conservatives, gun owners, vegetarians, pet owners, beauty pageants, etc. — is as relevant today as 20 years ago when the play was written."


Director Mike Baker Jr. said the play makes fun of our ability to transform and accept personal responsibility, accountability, and possibility — similar to that of the “EST Movement” (EST-Werner Erhard Seminars Training in the 1970s) satirized in this play. "In charting each of the character's arcs, I found many do take responsibility for their actions, admit imperfection, and embrace the changes that may come," he said. "This took some real creative work on the part of the authors."

He said the biggest challenge in directing was not losing sight of the humanity within. "There are a number of tender moments of realization that could have easily been glossed over. I think the actors and I found each of them. These only serve to heighten the comedic moments that follow," he said.

When he interviewed Jaston Williams and Joe Sears for the Bravo Cable Channel TV series, "National Arts," he said they made it a point to tell him that these characters were real people. "Most were penned somewhat lovingly; others were made fun of for the buffoons they are," he said. "No doubt, the audience will recognize characters just like these in their own communities. Folks mired in pettiness which holds many of them back."