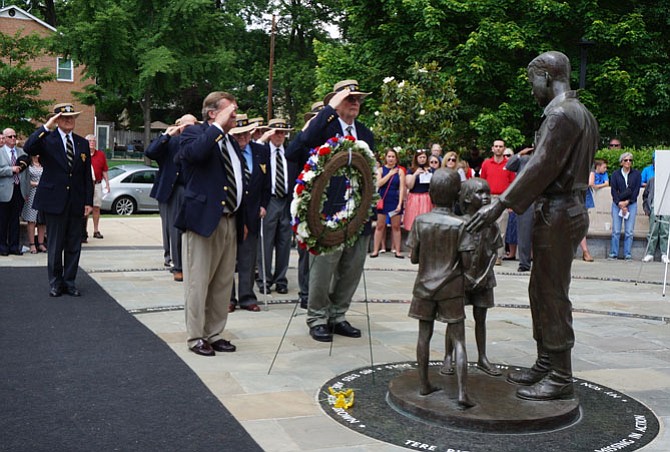 Representatives of the United States Military Academy Class of 1959 salute during the playing of Taps after placing a wreath at the Capt. Rocky Versace statue May 29 during the Memorial Day Ceremony honoring Alexandria’s fallen veterans. Photo by Jeanne Theismann.

“Coming here is a chance for us to share our memories of those we lost.” — Arlisa Smith Walton, sister of fallen Vietnam veteran Johnny Smith. 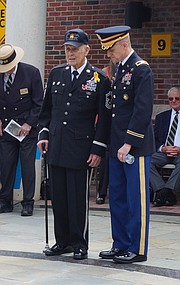 World War II paratrooper Chief Master Sergeant William A. Tippins, left, stands with Col. Douglas Stitt as he is honored by the crowd May 29 during the Memorial Day ceremony at the Mount Vernon recreation Center. 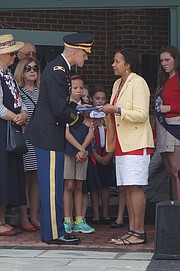 Tracy Jordan, center, holds a picture of his brother, Marine Corporal Wayne Jordan, who was killed March 17, 1967 in Quang Tri. With him are his brother Gary Jordan, right, and Del. Mark Levine.

Army Specialist Johnny Jerome Smith was three months shy of his 21st birthday when he died May 20, 1970, in Quang Tin Province in Vietnam. On May 29, he was among the 67 Alexandrians killed or missing in action in Southeast Asia honored during the city’s Memorial Day Ceremony at the Capt. Rocky Versace Plaza and Vietnam Veterans Memorial.

“I was only 13 when I lost my brother,” said Arlisa Smith Walton, who only last year learned of the memorial to Alexandria’s fallen Vietnam veterans. “I have met so many others who were about the same age as me when they lost someone. Coming here is a way for us to share our memories of those we lost.”

Until recently, Smith was one of 22 Alexandrians without a corresponding photo in the Faces Never Forgotten database for fallen Vietnam veterans. Through the efforts of childhood friend McArthur Myers, Walton was tracked down, along with others.

“We are down to three missing photos,” said Friends of Rocky Versace representative and Memorial Day ceremony organizer Kevin Rue. “We will continue our efforts until all of Alexandria’s fallen are accounted for.”

Family members of Alexandria’s fallen were presented with the Department of Defense 50th Anniversary Vietnam War Commemoration certificates and members of the Anna Maria Fitzhugh Chapter of the National Society of the Daughters of the American Revolution made the Gold Star Family presentations.

“This memorial is a very special place,” said Walton. “It’s a real tribute to Johnny and all of the men who never made it home.”